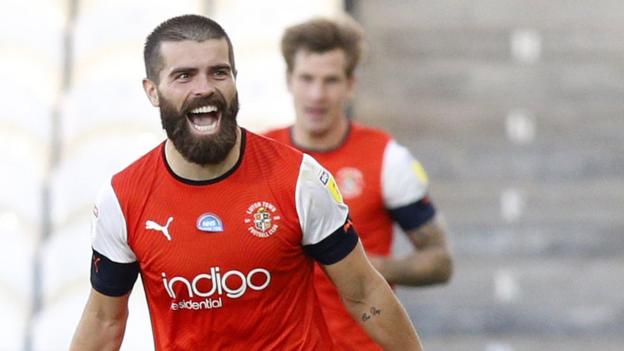 Luton Town climbed off the bottom of the Championship with victory at fellow strugglers Huddersfield Town.

After a drab first 45 minutes, Sonny Bradley headed the Hatters ahead from a corner early in the second half.

Elliot Lee put the game beyond doubt, blasting in the second goal as he reacted first after a James Collins shot hit the post.

The win sees Luton move up to 23rd, two points from safety.

Both sides desperately needed the points but neither showed that in a sluggish first half.

Huddersfield had most of the possession before the break, and while they got into good wide areas, all too often their final ball was poor.

Emile Smith-Rowe’s deflected sixth-minute shot and a header by Jon Gorenc Stankovic from the resulting corner promised much early on.

But Lewis O’Brien’s 34th-minute shot from 25 yards, straight at keeper Simon Sluga, was the last meaningful effort the Terriers had all game.

Luton were markedly better after the break, playing in more advanced areas and stifling the hosts in wide areas.

Their opening goal came after their first shot of the game. Pelly-Ruddock Mpanzu’s effort from distance was deflected wide and Bradley held off Christopher Schindler to rise highest and nod in James Bree’s corner.

Collins almost doubled Luton’s lead just after an hour, but his curling right-footed effort from the edge of the box was just wide after he had cut in from the left and beat two defenders.

But the Hatters did not have to wait long for their second as Lee outmuscled substitute Andy King to fire the ball into the roof of the net from the edge of the box after Collins’ shot rebounded off the frame of the goal.