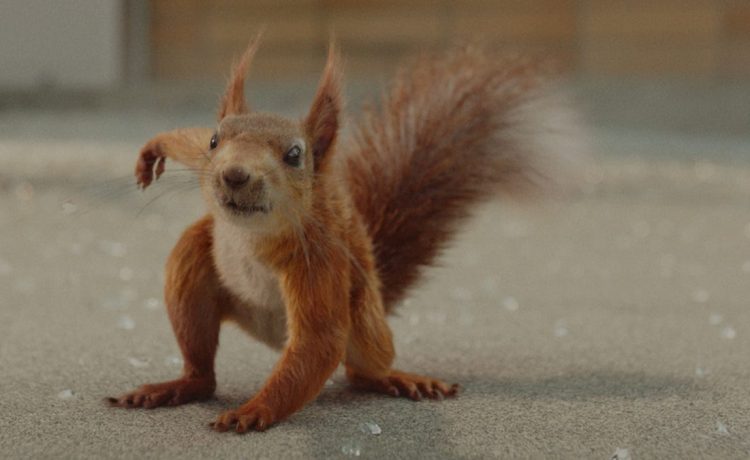 The time has come for even the common squirrel to step up into movie superhero stardom.

It was a tough nut to keep the squirrel grounded in some sense of reality – in keeping with the character from the beloved Newbery Medal-winning 2013 children’s book “Flora & Ulysses” – while also making Ulysses a bona fide hero with powers of flight, the ability to comprehend humans and the desire to fight injustice.

“I wanted Ulysses to be a legit, hardcore force of nature,” says director Lena Khan. “It had to be like, ‘I can buy into this superhero.’ “

That power pose really stuck with Khan during her research for the family comedy. Ulysses assumes the position after his first flight and on the film’s poster.

“You see Spider-Man and it’s all about how he looks when he’s hanging from a pole,” she says. “So that three-point landing is one of the movie’s key positions. And squirrels do that pose.”

Squirrels strike the posture when grooming in a still position, not when touching down, says Mikel Delgado, an animal behaviorist at the University of California, Berkeley. All four legs are needed for landing from often-impressive jumps and other breathtaking acrobatics.

“Squirrels are physically amazing,” says Delgado. “When you think about what they have evolved to do, they are leaping from tree to tree without touching the ground. Their true superpowers are navigating through trees, along with burying seeds and remembering where they buried them.”

“Flora & Ulysses” filmmakers initially considered incorporating real squirrels, visiting an animal training facility for an exploratory audition. “They jumped on me, they climbed, they did flips,” says Khan. “But they couldn’t do everything we wanted for Ulysses.”

The filmmakers decided to go computer-generated and mulled more than 200 squirrel species for the coveted role. Khan turned down the ubiquitous gray squirrel (“Doesn’t look like he’s going to go saving people”) and the black squirrel common in Canada (“Doesn’t have the pizzazz”).

The star-making part went to the Eurasian red squirrel and its tell-tale fur-plumed ears.

“He’s a unicorn among horses, with a physique that befits a superhero. The red squirrel shows that and Ulysses’ savvy personality,” says Khan.  “And I wanted those Batman ears.”

The red squirrel was scaled up for size and had to be revised after the initial design: The original Ulysses was too fond of food. The squirrel was sent to boot camp.

“Earlier designs made him a little bit too chubby. (We wanted) Ulysses after he’s worked out and trained for the role,” Khan says of the final concept art. “There’s a lot of fatty squirrels, but we couldn’t let our squirrel be like that. He’s got some muscles.”

READ  James Bond: Daniel Craig and Pierce Brosnan back female 007 after No Time To Die

Creating the hero squirrel was a months-long process for the Los Angeles Framestore studio that outlasted filming. The film’s actors played off formless puppets standing in for Ulysses, but were aided by handling real rodents. Lawler worked with domesticated rats to get used to dealing with her character’s squirrel BFF.

“Matilda would take them home and care for them,” says Khan of the rats. “They gave an idea of what it was like to care for live animals and helped her get used to the way a live critter crawls up your arms. That helped her performance.”

‘Sonic the Hedgehog’ redesign: How backlash made the character better

Veteran voice actor John Kassir, who chittered as the raccoon Meeko in Disney’s 1995 animated film “Pocahontas,” was daunted voicing his first screen squirrel, without human words. “Ulysses is carrying the movie. You needed this character to come to life – all while walking the line between communicating to humans and still keeping it squirrel,” he says.

Relying on his own experience observing the critters around his home, Kassir threw out what became “squirrel jazz” in the studio, bridging the gap between human emotions and realistic squirrel sounds. Khan loved it, especially his squirrel munching.

“Ulysses eats with a tremendous amount of satisfaction, and if ever someone could find 10 different ways to eat in squirrel language, John did,” says Khan.

The director turned into a squirrel fan girl watching Ulysses soar on a big screen for the first time.

“Ulysses came to life, it was so exciting,” says Khan. “You could see the wind going through his fur when he flies. You could see the food debris on the whiskers and the tiny glint in his eyes.”

Streaming preview: 10 must-see movies heading to streaming in 2021, from ‘One Night in Miami’ to ‘Coming 2 America’