Scientists still cannot agree on how deadly Covid-19 is — with fresh data from Italy suggesting it may kill up to 7.4 per cent of patients.

Experts have been baffled over the true mortality rate of the disease since the start of the pandemic in December.

World Health Organization chiefs first claimed the infection-fatality rate was 3.4 per cent but this week changed their estimate to 0.6 per cent.

But experts who analysed coronavirus data from a small town in the Italian region of Lombardy found that around one in 13 people who get infected die.

One epidemiologist — who has reviewed evidence on death rates — claimed it was ‘by orders of magnitude the highest I’ve seen’.

He also pointed to data from a separate study in Qatar that suggested it may be as low as 0.01 per cent — the equivalent of one death for every 10,000 cases.

Gideon Meyerowitz-Katz, of the University of Wollongong in Australia, said it was ‘by a very long way the lowest I’ve seen’.

Similar antibody surveillance studies have produced wildly different results across the world, ranging from as low as 0.25 per cent to 1.4 per cent. 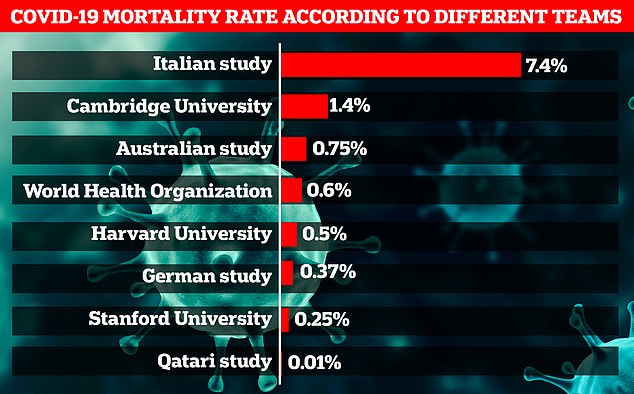 The Italian study said the mortality rate was 7.4 per cent – far higher than any other researchers’ estimates which range from 0.01 per cent to 1.4 per cent 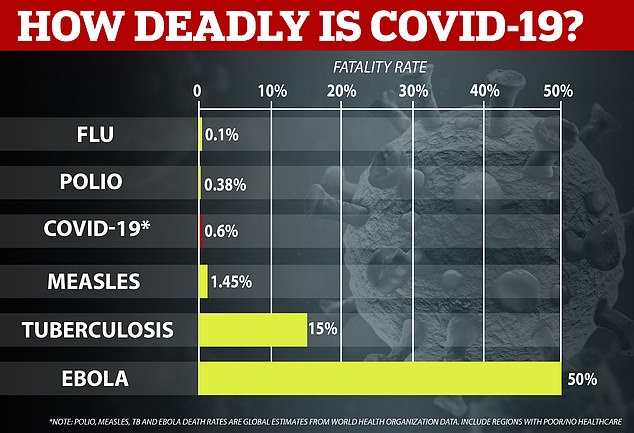 THe WHO believe Covid-19 kills 0.6 per cent of all patients or one in every 167. Although it sounds minimal, it means Covid-19 is six times deadlier than the flu and almost as twice as fatal as polio

A top WHO official revealed this week that the agency’s best guess on the infection-fatality rate (IFR) was 0.6 per cent.

Dr Maria Van Kerkhove admitted the estimate, based on data from several studies, ‘may not sound like a lot but it is quite high’.

The estimate suggests the coronavirus kills around one in 167 patients, making it six times deadlier than seasonal flu.

The IFR is different to the case-fatality ratio, another measures of how many people die of a disease which is based only on confirmed cases.

WHAT ARE THE DIFFERENT MORTALITY RATE ESTIMATES FOR COVID-19?

Researchers led by Gabriele Pagani, of the Università degli Studi di Milano screened the entire population of Castiglione d’Adda, a town in the Lombardy region that has been heavily hit by Covid-19.

Cambridge University analyse real-time COVID-19 data in the UK to paint a picture of the epidemic now, and work up a forecast of infections and deaths.

The statistical modellers, led by Dr Paul Birrell, are working with Public Health England (PHE) and their information feeds directly to government teams.

Most coronavirus modelling, including the grim Imperial College London projection that warned 500,000 Brits could die without action and convinced ministers to impose a lockdown, are based on a death rate of around 1 per cent.

Epidemiologist Gideon Meyerowitz-Katz, from the University of Wollongong, and James Cook University’s Dr Lea Merone, collected information from 13 global studies that tried to calculate the true death rate of the coronavirus and settled on an overall estimate of 0.75 per cent.

They said it was ‘likely’ that it was somewhere between 0.49 and 1.01 per cent and that it would be higher among elderly people or the chronically ill, and lower for younger people.

The number chimed with data emerging from New York, where random antibody testing in April suggested a quarter of the city of eight million people had been infected with the illness, meaning the 16,000 fatalities equaled a death rate of 0.79 per cent.

World Health Organization officials believe the infection fatality rate of Covid-19 is 0.6 per cent based on various studies, or one in 200 patients.

At a virtual news briefing from the WHO’s headquarters in Geneva on August 3, Maria Van Kerkhove, WHO’s technical lead for coronavirus response said the figure ‘may not sound like a lot, but it is quite high’.

A study from Harvard University found that the death rate on the Diamond Princess ship was 0.5 per cent. The cruise ship is ideal for studying because there is complete data available for everyone on board at the time there was an outbreak.

The team found the fatality rate was 1.8 per cent – 13 deaths out of 712 cases – but the rate was adjusted to 0.5 per cent to reflect the general population.

In April, researchers did swab and antibody testing of a randomly selected 919 people from 405 households in Gangelt – a small town in Germany where the country’s outbreak began.

Results showed around 15 per cent of the population of Gangelt had been infected with the coronavirus.

The town had recorded seven deaths out of 1,800 confirmed cases, which equates to a death rate of around 0.37 per cent.

A review of antibody surveillance studies suggests the coronavirus has a mortality rate of 0.25 per cent, meaning it kills one in every 400 people who get it.

The new estimate was based on figures from 23 different testing surveys carried out worldwide, which suggested the actual mortality rate ranged from as low as 0.02 to as high as 0.78 per cent.

They measured antibodies in the blood, a sign of past infection, which may be more reliable than estimating how many people have been infected.

Qatari researchers led by Dr Laith J. Abu Raddad from Cornell University, Doha, used a mathematical model to get an idea of how many people in Qatar had been infected over the pandemic.

The model was based on data about how the SARS-Cov-2 naturally spreads in a population and the results of a series of studies in Qatar that used swab and antibody tests until around the date July 10.

The model showed that the IFR was 0.01 per cent, which was ‘remarkable’, the researchers said.

But it is not entirely reliable given so many infected people have went untested for the virus during the course of the pandemic.

For example, the CFR ratio in Britain is around 15 per cent — which would mean the disease is 30 times’ deadlier in the UK than what the WHO believes.

The IFR estimates how many people die from the disease overall, including patients who don’t show any symptoms and may never get tested.

To measure IFR accurately, scientists must know exactly how many people have had the coronavirus — technically called SARS-CoV-2.

Millions would have had the disease and not been tested due to a lack of capacity in the early days of the crisis.

The only way academics can currently accurately estimate this is through looking at how many people have developed antibodies to the virus.

Infected patients make antibodies — proteins made by the immune system to fight off pathogens in the future — weeks after their battle with the disease.

But not everyone who has Covid-19 develops antibodies if other parts of their immune system clears the virus, and studies have shown antibodies can wane over time, making them undetectable with testing.

The Italian study was based on screening the blood of thousands of people living in Castiglione d’Adda for antibodies.

But only 184 cases had been officially reported in the town as of June 21 — a week before the study by Gabriele Pagani and colleagues was published.

It would make it almost as deadly as SARS, a related coronavirus which killed one in ten people during an outbreak between 2003 and 2004.

The researchers did not explain why so many people in the town had coronavirus. But they noted Castiglione d’Adda was one of the first places in Italy to be hit, and therefore may not have been prepared.

They also did not say when the study was conducted, as this would have an impact on antibody prevalence.

But researchers have often noted that Italy has an older population, which may to blame for higher cases.

Around one fifth of Castiglione d’Adda’s population is over the age of 65 compared to around 13 per cent in the UK.

When the same death rate is applied to the UK, it suggests the true number of cases is only double what has been detected through testing.

READ  Coronavirus tests being sent to labs in Italy and Germany after backlog of 185,000 swabs builds

Some 46,300 Britons have officially died after testing positive for the virus, meaning 625,000 people would have been infected if the IFR of 7.4 per cent was true.

But the true size of the epidemic is believed to be in the millions based on antibody surveillance testing ran by the UK government.

The Italian research — released as a pre-print on Medrxiv — was not published in a journal, meaning it has not been through a review process by other scientists.

However, the aim of the research was not to figure out the IFR. Instead, the experts wanted to see how infection rates differed between ages.

The IFR was pointed out by Mr Meyerowitz-Katz on Twitter, who also revealed the very low rate found in the study from Qatar.

Experts at Cornell University in Doha used a mathematical model to get an idea of how many people in Qatar had been infected over the pandemic.

The country of 2.8million people has had only 177 deaths and 111,538 cases up until August 5, according to official data.

The model was based on data about how the virus naturally spreads in a population and the results on results of mass swab and antibody tests.

Experts led by Dr Laith Abu Raddad found that the IFR was 0.01 per cent, which was ‘remarkable’, the researchers said.

They wrote in their pre-print paper: ‘Remarkably, while widespread, the infection has been characterized by relatively low case and infection severity and fatality rates, which were not well above those of a severe seasonal influenza epidemic.’

But the estimate — that Covid-19 only kills 0.01 per cent of people it infects — cannot physically be true for the UK.

It would mean the UK has had 426million cases. For comparison, the population of the UK is around 66million.

He and his colleague Dr Lea Merone, of James Cook University, searched online for IFR studies from around the world.

Meanwhile, a review of antibody surveillance studies by Stanford University experts has suggested the coronavirus has a mortality rate of 0.25 per cent.

Harvard University took a different approach, and studied the Covid-19 outbreak on the cruise ship the Diamond Princess.

Cruise ships are deemed an ideal environment to study because there is complete data available for everyone on board at the time.

The team found the fatality rate was 1.8 per cent — 13 deaths out of 712 cases — but the rate was adjusted to 0.5 per cent to reflect the entire population.

Another German study which honed in on the small town of Gangelt put the rate  at around 0.37 per cent.

Stomach bloating: A life-sustaining reflex could cause a bloated belly

More than half of coronavirus patients have ongoing fatigue, study shows

Stillbirths have surged up to 50 percent amid COVID-19 lockdowns

Pampered Sphynx cat lives his best life with bubble baths, massages and being driven around in a pram