GPs today voted against a radical motion to slash their opening hours to between 9am and 5pm following a backlash over the ‘unacceptable’ plans.

Family doctors have, however, demanded the NHS introduces a safe working limit into their contracts.

Both controversial motions, leaked to the press last month, were fielded at a British Medical Association conference in York today.

GPs complained their workload is now ‘intolerable’ and that appointment limits were needed ‘before it’s too late’. They warned squeezing in so many appointments raises the risk of missing diseases and prescribing the wrong drugs.

No actual limit was put forward in the motion, but the BMA already says that doctors shouldn’t see more than 25 patients a day.

Campaigners argue GPs – who are paid £100,000 a year, on average – are currently seeing almost double that.

Despite asking for an immediate plan to help ease the crisis in general practice, GPs rejected the radical call to reduce their core working hours. 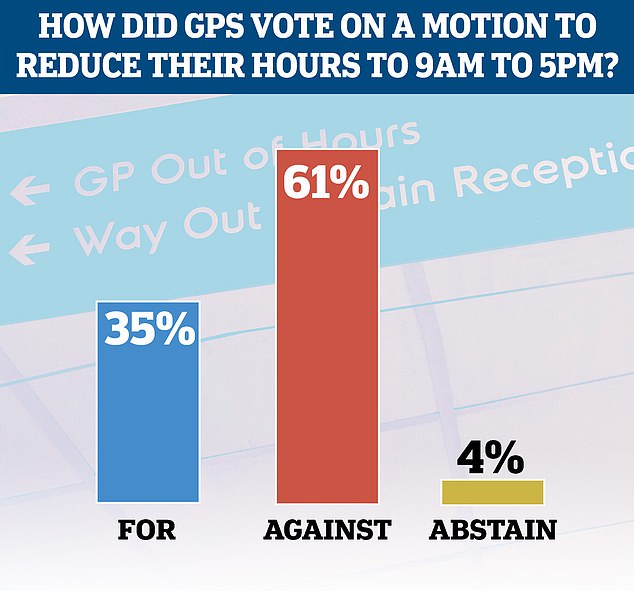 A controversial motion for GPs to reduce their core hours to nine to five from the current current 8am to 6.30pm was defeated today 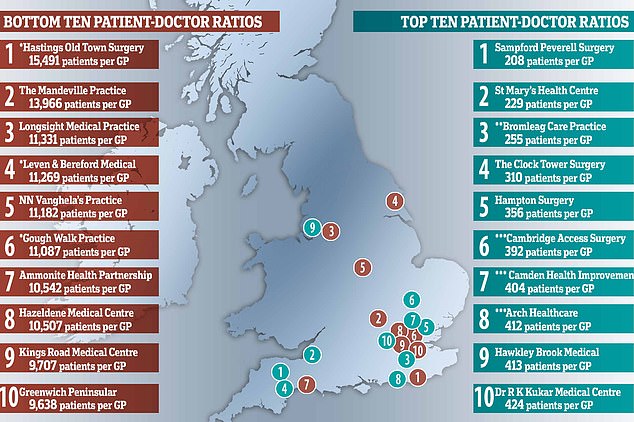 MailOnline analysis shows Hastings Old Surgery in Hastings has nearly 15,500 patients for every full-time GP as of February 28, the latest date official figures go up to. In contrast, Sampford Peverell Surgery in Devon has only 218 patients registered for every family doctor working at the practice. *Sussex NHS Commissioners, which commissions the Hastings Old Town Surgery, disputes the figure provided to NHS Digital by the practice. It says the practice has 7.5 FTE GPs, rather than the 1.56 recorded by the health service. East Riding of Yorkshire Clinical Commissioning Group (CCG), which runs the Leven and Beeford Medical Practice, disputes the NHS figure. The practice actually has five times as many GPs as it reported, with another joining in May. North East London CCG, which runs the Gough Walk Surgery, also said the practice has nearly five times as many GPs as it reported to the NHS ** practices cater to care home residents only *** practices cater to homeless people only 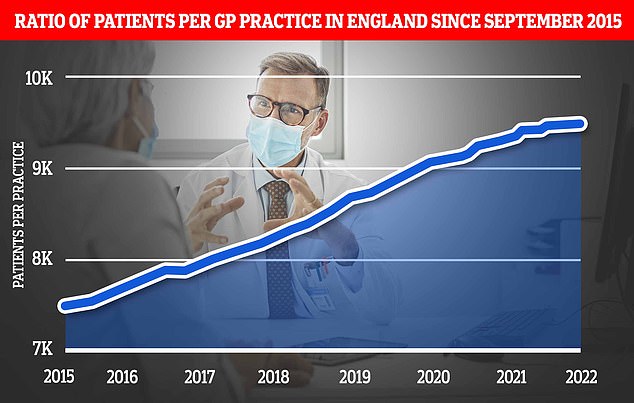 The patient-doctor ratio across the country has jumped a quarter from 7,465 in September 2015 to 9,457 in February this year, according to NHS Digital data 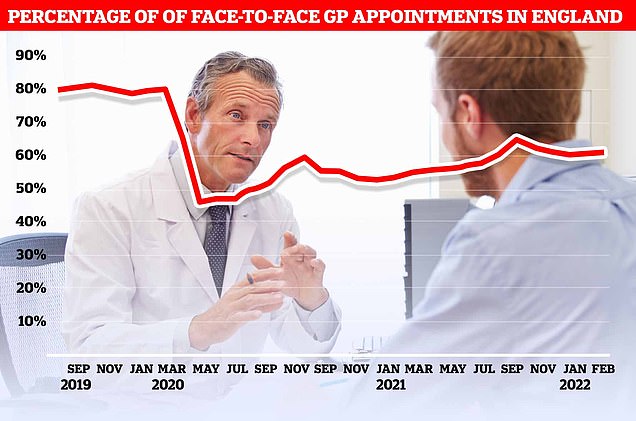 Before the virus hit the UK, around eight in 10 GP appointments — only half of which are actually with family doctors — took place face-to-face. The figure plummeted to 46 per cent at the start of the pandemic as phone and video call appointments were hailed as a way to reduce the spread of Covid. But despite the easing of restriction, the proportion of consultations that are in-person has only bounced back to 61 per cent 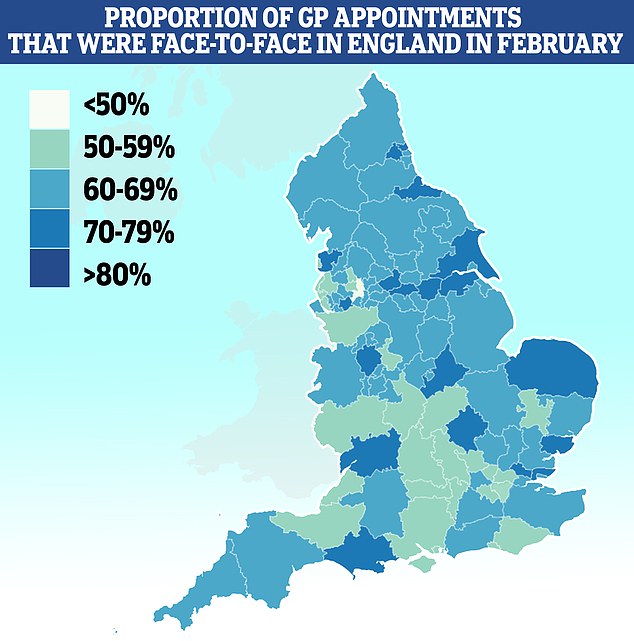 Map shows: The proportion of GP appointments that were made face-to-face in NHS clinical commissioning groups across England in February, the latest date data is available for

Nearly six in 10 GPs are working three-day weeks and a third want to retire within the next five years, figures show.

A survey of more than 2,200 family doctors in England shows 58.4 per cent are working six half-day sessions or less per week — equivalent to three days.

And 33 per cent are planning to hang up their stethoscopes by 2026, according to the research led by the University of Manchester.

The team warned that a ‘worrying’ 16 per cent of GPs — who earn around £100,000 per year — under the age of 50 were already making plans to leave the profession.

GPs highlighted problems with rising workloads, increased demands from patients and having ‘insufficient time to do the job justice’.

The poll found that paperwork was causing stress as were long working hours and dealing with ‘problem patients’.

Professor Martin Marshall, chairman of the Royal College of GPs, said the figures should be a ‘wake-up call’ for the Government to take action to keep family doctors in the profession.

England has around 6,800 surgeries, all of which routinely operate between 8am and 6:30pm.

Practices do not currently have to be open during their core hours but they must provide enough services to meet patient need and ensure arrangements are in place throughout these hours in case of emergency.

Outrage was sparked when details of the motion to reduce their opening hours were released last month.

‘Urgent action’ is needed to manage the imbalance between doctors’ workload and their workforce,’ the original motion stated.

The motions were debated at the BMA’s Annual Conference of Representatives of local medical committees (LMCs) — which represents GPs and surgeries — in York today.

NHS England — which controls the funding of GP practices — would have to sign off on any move.

After a fiery debate, 61 per cent of GPs voted against the motion, but shockingly over a third backed it.

In proposing the surgery hours motion, Dr Shaba Nabi, a family doctor in Bristol, claimed pressure to withdraw the motion showed how ‘gaslit’ the profession was.

‘Our hours are completely at odds with any sort of family life – so we continue haemorrhaging the GP workforce,’ she said.

She said a reduction in opening hours would not deny patients access to care but would, in-fact, make them safer.

This, she said, is because more GPs would want to stay in work rather than seeking a better work-life balance.

However, Dr L-J Evans, a GP in Southampton, urged her fellows to reject the motion, saying it would make the current situation worse.

‘Patients are really struggling to see their GPs, they’re not happy, there are just not enough GP appointments,’ she said. ‘How on earth is reducing core GP hours going to help?’.

Speaking as an out-of-hours GP, she also argued practices reducing their opening hours would just shift the issue of patients seeking help to other medics.

‘We cover all the hours that practices don’t, do you think we don’t have a workload workforce mismatch?’ she said.

‘How are we possibly going to resource the extra 12-and-a-half hours every week?’

However, another motion calling on BMA leaders across the UK ‘to use data on safe workload to renegotiate’ GP’s contracts with workload limits ‘to protect all general practice staff and patients’, did get their backing.

Dr Rachel McMahon, a GP in Teesside who proposed the motion, said the pressures being put on GPs are ‘inhuman’ with the expected workload ‘intolerable’.

‘Funding hasn’t kept up with demand, and we work harder and harder,’ she said.

‘There is guidance on safe work in general practice. It tells us we should be having 15-minute appointments and a maximum of 25 contacts per day. The average is 37.

In total, 70 per cent of the voting GPs backed motion, with 24 per cent against, and the remainder abstaining. 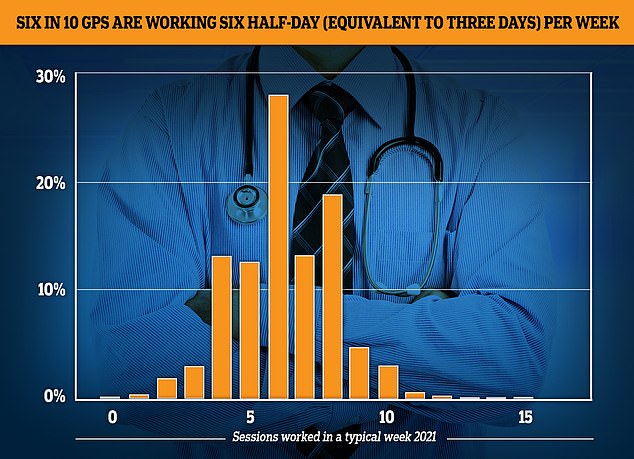 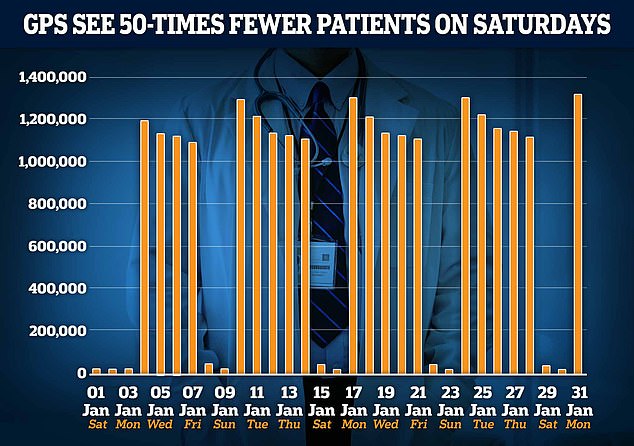 The graph shows the number of GP appointments per day in January. Since 2019, GPs have been asked to work evenings and weekends. But just 22,000 patients were seen on the average Saturday in January, compared to around 1.2million per week day 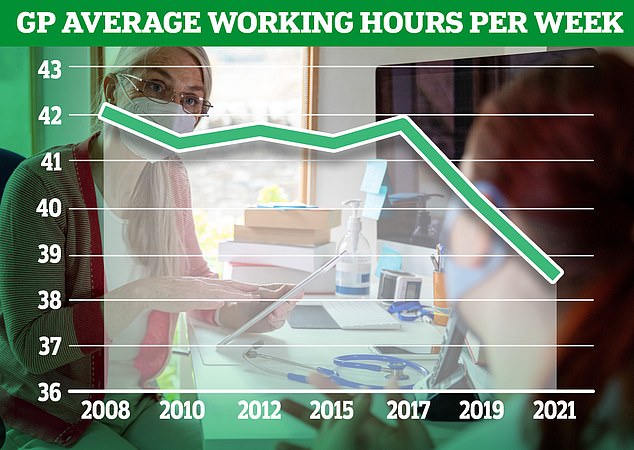 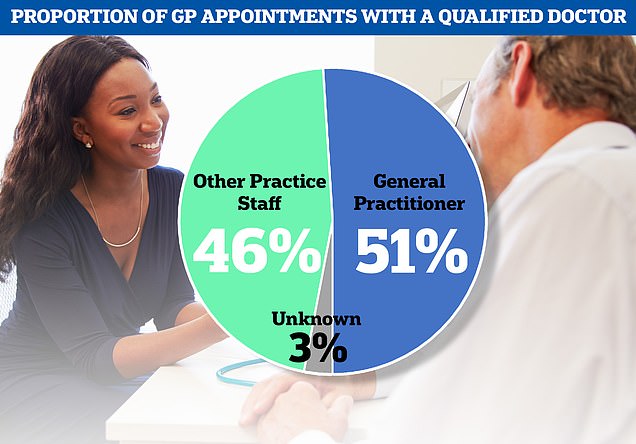 Overall, only 51 per cent of patients in the country were seen by their actual GP. 46 per cent were seen by other practice staff, including nurses, pharmacists and physiotherapists

As part of a drive to boost access levels, the same contract orders surgeries to open on Saturdays and offer weekday evening appointments from October.

Dennis Reed, the director of Silver Voices, a campaign group for the over-60s, told MailOnline he was ‘relieved’ the vote on reducing hours hadn’t passed.

He said: ‘It would be extremely bad publicity, and would be unfair on many hard-working GPs either who do work beyond the hours of nine-to-five.

‘Core hours here isn’t the big issue. The big issue is that there is insufficient coverage to provide reassurances about patient safety.’

Mr Reed said both Government and GPs needed to negotiate a broader solution to improve patient access to services, particularly in areas where patient to doctor ratios were high.

The debate on GP hours and patient access has raged since Britain emerged from lockdown to find some services, particularly face-to-face appointments with doctors, have struggled to recover.

Just last month it was revealed two-thirds of GP appointments were not conducted by patients’ actual doctors in parts of England, according to the latest NHS data.

NHS figures show just 36 per cent of patients were seen by a qualified GP in North East Lincolnshire in March, with the rest seen by other staff, including nurses, physiotherapists or even acupuncturists.

Additionally, just 62 per cent of GP appointments were made face-to-face in March.

While this was up on the previous month (61 per cent) it is far below the more than 80 per cent of appointments that were face-to-face pre-pandemic.

And the figures also show nearly one in six appointments — whether with a GP or not — were over within five minutes.

GPs have moaned about rising workloads and paperwork, increased demands from ‘problem patients’, and having ‘insufficient time to do the job justice’.

They also say the row over a lack of face-to-face appointments has caused morale to drop.

Official figures show the patient-doctor ratio across England had jumped since 2015, following a staff exodus, closure of surgeries and an ever-increasing patient list. Practices now deal with around 9,500 patients each, compared to 7,465 seven years ago.

Experts have repeatedly begged No10 to ‘make good on its manifesto promise of 6,000 more full-time equivalent GPs by 2024’ in order to solve the general practice crisis.

The number of family doctors working in England has fallen consistently since the former Health Secretary Jeremy Hunt first pledged to boost the workforce in 2015. 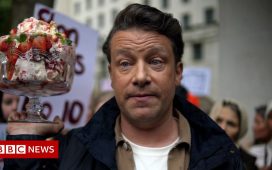 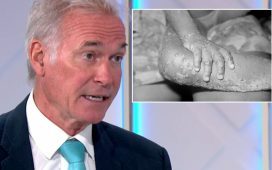 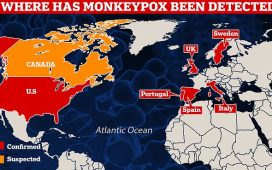 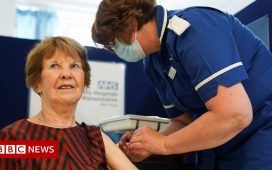