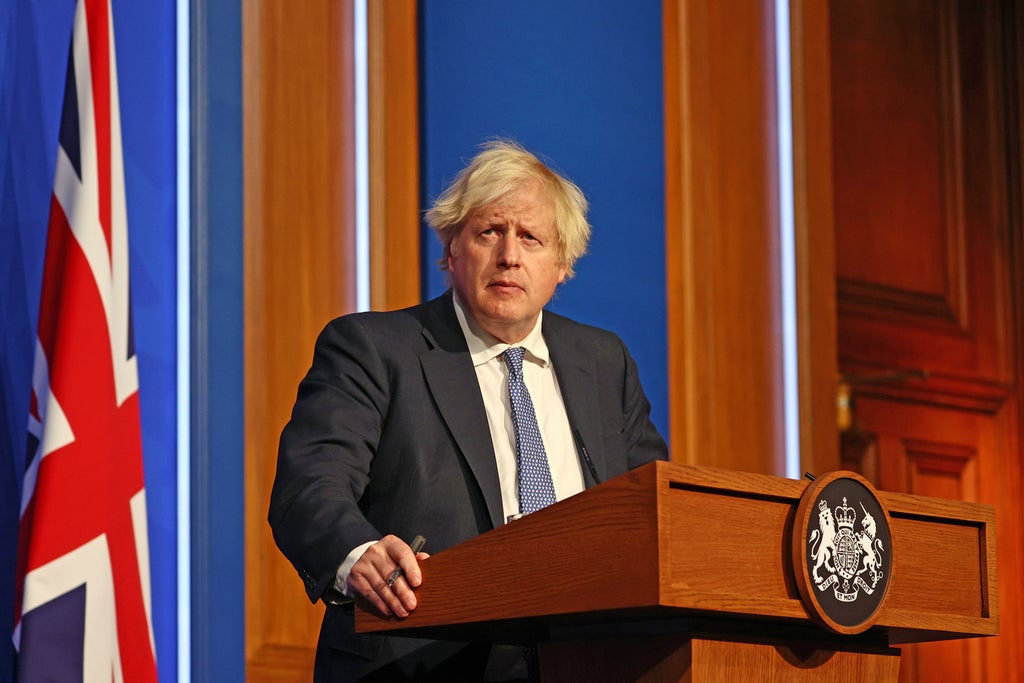 he government introduced its Plan B – working from home, more masks and covid health certificates – in the face of the Omicron variant with the Prime Minister insisting it was the best way to guarantee a “normal” Christmas.

Speaking at a press conference from Downing Street, Mr Johnson warned the new strain is “growing much faster” than Delta, with cases potentially doubling every two or three days as he strengthened England’s rules.

He urged people to “exercise due caution” but insisted Christmas parties and nativities could go ahead and said there was no reason to take children out of school.

But his calls on the public to have booster jabs and co-operate with the plan ran the risk of being over-shadowed as he came under pressure over allegations of a rule-breaching festive bash in No 10 last year.

Even as he announced mandatory mask wearing will be extended to indoor public venues including cinemas, theatres and places of worship and the guidance to work from home where possible will return on Monday, he faced questions about how the public would react amid anger over allegations staff broke Covid rules in a party on December 18 last year.

The Prime Minister deflected queries he had brought forward the announcement to divert attention from the row and the leaked video showing No 10 staff laughing about restrictions after the alleged party, which on Wednesday forced the resignation of Government aide Allegra Stratton.

“Just imagine the counterfactual, colleagues say, or people say, we’re somehow making this announcement to coincide with events in politics well actually imagine if this step were to be delayed because of political events of one kind or another, what would people say then? You’ve got to act to protect public health when you’ve got the clear evidence,” he said.

The plan also includes the use of NHS Covid passes, which can be obtained by having two vaccines or a negative lateral flow test, and will be needed for entry into nightclubs and other large venues from December 15.

Mr Johnson added: “The best way to ensure we all have a Christmas as close to normal as possible is to get on with Plan B, irritating though it may be it is not a lockdown.”

Sir Patrick said the virus had “mutated a lot, quickly”.

He told a Downing Street press conference: “What we are on is a road from pandemic to endemic, where this becomes a more regular infection like flu or something over time.

“But we are in a bumpy transition for that and it’s going to be difficult, it is difficult now and there are special measures that need to happen now to reduce the spread.

“It doesn’t mean this is what happens in perpetuity.”

In a simultaneous announcement in the Commons, Health Secretary Sajid Javid was urged to quit as he faced a barrage of criticism from the Tory backbenches at the new restrictions, which he said would be reviewed on January 5, before their expiry date of January 26.

Senior Tory William Wragg was heard shouting “resign” and the party row added to anger and fears that public support for the Conservatives had “taken a hit” following the Owen Paterson affair.

Mr Javid said the new restrictions were being imposed “with a heavy heart” but insisted they were necessary as he said there are 568 cases of Omicron confirmed in the UK, but that the true figure is estimated to be “probably closer to 10,000”.

He also said manufacturers believe they may have vaccines ready to trial “within weeks” to combat the Omicron variant, adding to MPs: “There will have to be a trial to make sure they are safe and effective.

“But there may be cases where they could be used in emergency situations.”

Kate Nicholls, the head of trade body UKHospitality, warned of “catastrophic” results without Government support for the sector, while unions called for furlough measures to return.

Frances O’Grady, the general secretary of the Trades Union Congress, said: “Requiring people to work from home over the busy Christmas period will hit jobs – unless ministers bring back furlough.”

But shadow health secretary Wes Streeting said Labour supports the new restrictions as being “in the national interest”, meaning they will almost certainly be approved in the Commons.