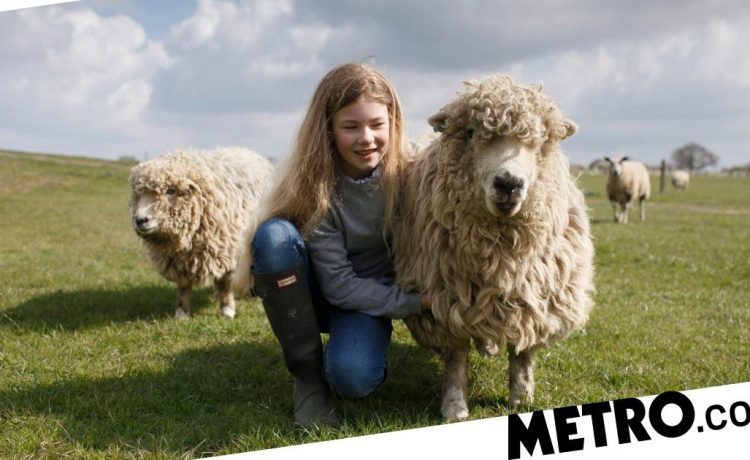 Esther Whittingham is just 12 – but she’s been looking after lambs since she was six and bid for her own sheep at an auction just a year later.

She even delivers animals herself and knows how to put a feeding tube into the throat of a newborn.

The schoolgirl has a real affinity with the animals and has always loved helping parents, Rachel, 46, and Grant, 50 who have had Yew Tree Farm in Chester in their family for 40 years.

Grant said: ‘She’s brilliant with them and she spends every minute she can with them.

‘Just this weekend she delivered her second season of lambs and she knew exactly what she was doing.

‘Last year was the first year we let her do it and one of her friends came to watch.

‘Esther was at the back of this sheep completely unphased and her friend stood there gobsmacked trying not to feel nauseous I think.

‘She gets up before school to give the lambs a bottle and feed the sheep and even goes in to say goodnight to them in her pyjamas.

‘By the time she’s on the bus going to school I’m getting text messages from her saying “don’t forget to do this and feed them that”.’

In her spare time, she reads agricultural veterinary practice and says her hero is Amanda Owen, the Yorkshire Shepherdess.

It started when she saw her first Greyface Dartmoor sheep at the Cheshire County Show aged seven, and she asked her parents if they could buy one.

Months later the youngster successfully bid for her first sheep at auction.

Now Esther is responsible for cleaning, grooming, feeding and lambing her sheep, four of which are even registered under her name with the breed association.

Rachel said: ‘She smells of sheep all the time.

‘When she was six we got two cade lambs for the kids just to have as pets more than anything, and Esther fell in love.

‘We ended up buying another two lambs and in the same year Esther bought her first sheep at auction.

‘She kept pulling her dad’s sleeve every time she wanted him to bid.

‘When we got home she just looked like Little Bo Peep walking around with all these lambs and sheep.

‘Even now they don’t pay us a blind bit of attention, we walk into the field and they walk away, but when Esther walks in they come running over to her.’


MORE : Sheep that hadn’t been sheared in five years saved after 75-pound fleece cut off

READ  Whale dies at SeaWorld after ‘suffering health problems for years’
Share on FacebookShare on TwitterShare on PinterestShare on Reddit
newsgrooveApril 19, 2021