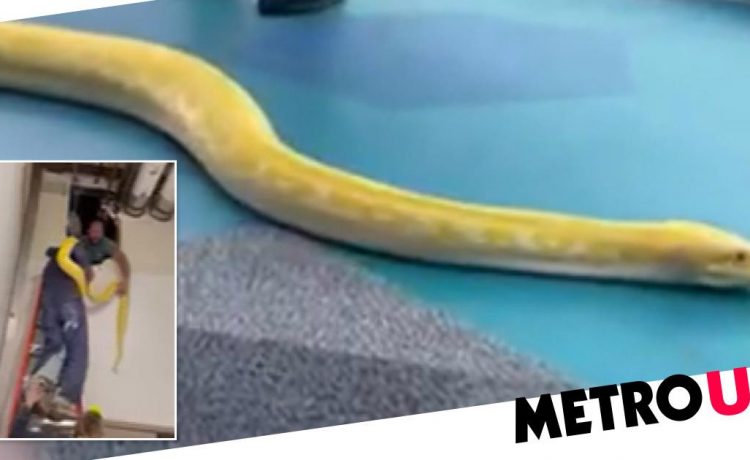 A 12-foot-long python that escaped her enclosure at a zoo has been found two days after she was reported missing – inside the wall of a shopping mall. Cara the Burmese python disappeared from Blue Zoo Baton Rouge, which is located inside the Mall of Louisiana, and was found around 3.30am Thursday, authorities said.

Video shared by the zoo on Facebook showed several people gathered around a large hole near the ceiling of a wall inside the mall. One man held Cara near her neck and wrapped part of her yellow and white body around his shoulder as he stepped down from a ladder.

Another man inside the hole assisted in holding parts of Cara’s long body. Others standing on the floor took parts of Cara from the man who rescued her from the wall.

‘We couldn’t be more excited to share with you that the search is over!’ the zoo stated in its Facebook post. ‘(Cara) has been found, safe and healthy!’ 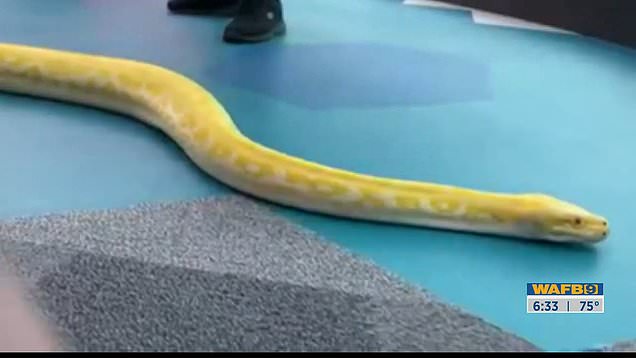 Cara was then checked out by doctors at the LSU School of Veterinary Medicine, zoo managers told WAFB.

Records obtained by the TV station on Wednesday showed that Cara had gone missing for almost 30 hours before authorities were informed. Several people who visited the zoo said the python was not in her enclosure on Monday.

Zoo managers called East Baton Rouge Animal Control shortly after 9am on Tuesday morning. The zoo was closed to the public immediately and into Wednesday as the search for Cara ensued.

Employees of the zoo said there was evidence that the python entered the ceiling and called plumbers and air-conditioning company workers to help look for Cara.

Burmese pythons are non-venomous and are 12 feet long on average, but can grow as long as 23 feet. Cara is a ‘very sweet snake’, zoo officials said when they reported her missing, and was used in shows with children.