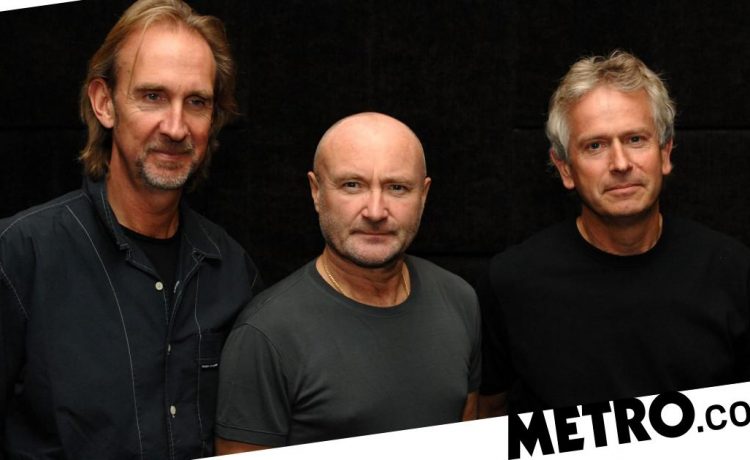 Genesis have been forced to postpone their anticipated reunion tour until later in the year, announcing scheduled April dates will be pushed back.

It’s not the first time the band, which is comprised of Phil Collins, Tony Banks and Mike Rutherford, has had to delay their performances, after initially planning to come together last year.

But with the coronavirus pandemic still wreaking havoc on the entertainment industry, as the UK remains in its third national lockdown, the band has had to cool their jets once more.

Sharing a clip of the band rehearsing to the official Genesis Instagram this afternoon, a statement read: ‘“We’re ready, but the world isn’t… yet!”

‘Genesis are rescheduling their April UK and Irish tour dates for autumn 2021 in light of the ongoing pandemic.’

It went on to confirm The Last Domino? Tour 2021 will now start in Dublin on September 15, and is set to be group’s first live outing together since the globe-trotting, sell-out Turn It On Again: The Tour in 2007.’

The statement went on: ‘They will be joined on stage by @nic_collins on drums, and the band’s long time lead guitar and bass player @darylstuermer.

‘Tickets for all rescheduled dates are available through genesis-music.com – link in bio. All previously purchased tickets remain valid and ticket holders will be contacted by their ticket agent.’

Rocker Phil is unable to play the drums due to previous back surgery and will be replaced by his 19-year-old son Nicholas, as well as long-standing associate Daryl Stuermer.

Explaining why they felt it was the right time to get back together, Mike told Zoe Ball on Radio 2 last year: ‘I think it’s a natural moment actually, Phil’s been out on tour for the last two and a half years and it seemed the natural moment to have a convo about it.

‘We’re all still good friends, we’re all above grass, so why not?’

Phil also said he’s proud to handover the drumming duties to his teenage son and explained: ‘For me, it wasn’t a deal-breaker but it was something that was working and a problem we had to overcome.

‘I’m going to be doing my best to play some bits on the tour, I have already been working out what I’ve got to do and what songs to play.’

Phil, Tony and Mike are known for being the band’s longest lasting members, but Genesis saw a number of stars in the lineup, including lead singer Peter Gabriel and guitarists Anthony Phillips and Steve Hackett.

The band has a huge six number one albums to their name and have sold over 100 million albums worldwide.


MORE : This Morning viewer phones in to find out if her pet rabbit is a lesbian: ‘She’s mounting her’

READ  Tiffany: 'It's awesome to see my music liberate middle-aged women'
Share on FacebookShare on TwitterShare on PinterestShare on Reddit
newsgrooveJanuary 22, 2021