The drugmaker behind a generic form of Xanax has issued a nationwide recall of its popular anxiety medication over fears of a ‘foreign substance’ in the pills, the company announced Friday.

Bottles containing 500 doses of 0.5 mg Alprazolam tablets shipped out between July and August are thought to be affected.

Mylan, which sells the drug, did not provide any details on what the ‘foreign substance’ in question might be, and said that no patients had reported illnesses or injuries after taking its drugs.

It asked retailers and wholesalers to pull any products from a single lot of the medication from their shelves, but it’s not clear how many bottles were distributed with the shipment. 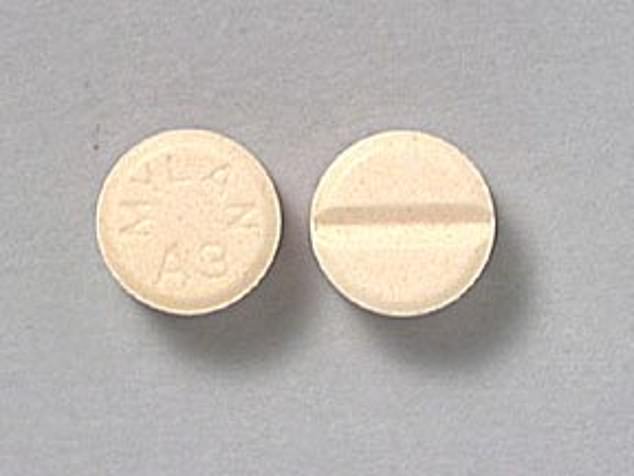 Mylan has recalled one lot of Alprazolam (pictured), its Xanax generic, citing fears that bottles of 500 tablets may be contaminated with an unidentified ‘foreign substance’

‘This lot is being recalled due to the potential presence of a foreign substance,’ said Mylan on its website.

‘Clinical impact from the foreign material, if present, is expected to be rare, but the remote risk of infection to a patient cannot be ruled out.’

In 2012, some 49 million prescriptions for Xanax or its generics were written in the US, according to American Addiction Centers.

And anti-anxiety drugs like Xanax have been on a steady rise in the last couple decades.

Between 1996 and 2013, prescriptions for benzodiazepines, the powerful class of drugs that Xanax belongs to, increased by 67 percent, according to a University of Pennsylvania study.

And the Americans with those prescriptions have been getting more pills with them, with the number of tablets doled out tripling over that same span of time.

Benzodiazepines – commonly referred to as simply ‘benzos’ – were first considered a safer alternative to the addictive ‘sleep cures,’ barbiturates, and Xanax was thought a safer successor to Valium.

But in recent years, benzos and Xanax in particular have gotten a bad rap, too, fueling a growing number of addictions and overdoses.

Alongside its recall, Mylan published this image of the labeling that would be on bottles of the affected Alprazolam

Now, generic Xanax is the latest drug in recent years’ slew to be suspected to have a contamination of some sort.

Just in the last year, popular blood pressure drugs like Valsartan and the heartburn drug, Zantac, have been recalled after a cancer-causing contaminant, NDMA, was detected in the supply.

Since 2013, drug companies have had to recall about 8,000 medicines, a report from Kaiser Health News found.

Mylan did not reveal what kind of ‘foreign substance’ might be in its batch of Alprazolam, but the risk of ‘infection’ suggests it is not the same carcinogenic chemical – but could be any number of other materials.

READ  Flame retardants: what to know about chemicals in furniture and cables

How, exactly, foreign objects, substances and contaminants get into the drug supply is difficult to determine, but often involves human error, unsanitary conditions, machine glitches or unforeseen between substances used to make the drugs.

For its part, Mylan is urging patients taking its 0.5 mg Alprazolam tablets to call the distributor Stericyde (1-888-843-0255) if they think they may have received a potentially contaminated bottle of the drugs.

You can use a potato to help get rid of neck pain and migraines, says expert

UK looks set to offer 'path to citizenship' to 300,000 people in Hong Kong