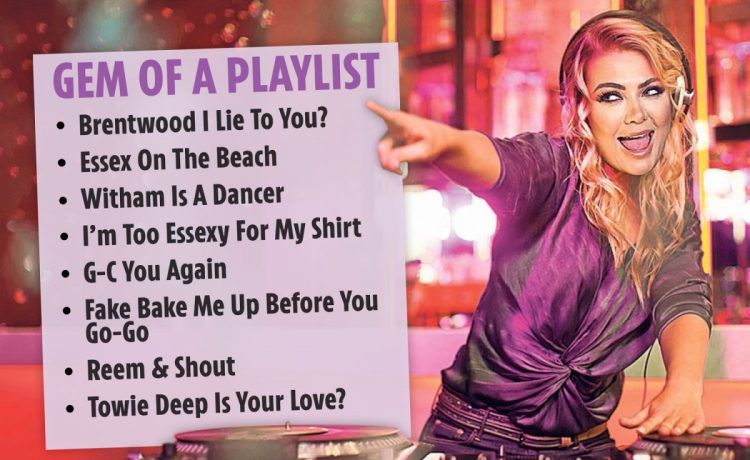 THINGS will be very different by the time clubs reopen, not least because Gemma Collins will be DJing in them.

I’ve learned the former Towie favourite is offering herself out to do sets later this year — and is to have lessons to learn how to spin tunes so she can entertain the masses.

She is more used to dancing to club bangers than playing them, but the money-spinning side project is expected to earn her up to £25,000 per gig.

A source close to The GC said: “Gemma has been asked to DJ at parties and events loads of times in the past but she’s never known how, so has had to turn them down. But now a pal has offered to teach her and she is raring to go.

“It’s a really lucrative business and she could easily make more from one gig than lots of people make in a year.

“Lots of events and club nights won’t think twice about paying big money to get Gemma, she’s such a great character and is bound to draw in punters.

“Her thinking is that the country will need a bit of fun when things start to reopen and she wants to provide that.

“She is a massive music fan and has been to plenty of clubs in her time, so she reckons she knows what will get people up and dancing.”

Gemma, who turns 40 in a fortnight, has said her favourite artist is Maddona, but I’ve had a go at what her Essex-themed party playlist might really look like, below, and how she might look on the decks.

READ  Lindsey Vonn and boyfriend P.K. Subban strip down to bikinis in a swimwear swap for July 4

Her move into DJing is sure to be more successful than her attempt to launch her music career last month.

She teamed up with Darren Day for a cover of Baby It’s Cold Outside in a bid to land the festive No1, but it failed to crack the charts.

Perhaps a GC dance remix might do better next year?

READ ON FOR MORE OF SIMON BOYLE’S BIZARRE COLUMN

SHE may have been up all night, to quote her own song, but Ariana Grande still looks as fresh as a daisy.

The Positions singer posed in this black bodysuit with matching tights and high heels on a rather questionable-looking carpet.

Ari posted the snap on Instagram, quoting lyrics from her saucy song 34+35, which has been remixed by Doja Cat.

The new version also features Megan Thee Stallion, who is certainly familiar with kinky lyrics, having featured on controversial song WAP with Cardi B last year.

Ariana had teased the project with a cartoon of the trio dressed like the fembots from the Austin Powers movies.

The spy, played by Mike Myers, would have had a field day if he’d seen Ari like this.

JENNIFER Lopez steps out after a gym session in Miami – and shows she has clearly put the hours in to get a bod like that.

MOST celebs who get trolled struggle to deal with the abuse – but Robbie Williams has turned it to his advantage.

He’s written a song inspired by someone who had a pop at him, basing lyrics on a book the fella wrote.

The Angels singer said: “I had a song out and my narcissistic personality took me to go and check out Twitter, just to see what people were saying.

“And you know, this was the worst thing to do.

“The top thing was a guy just laying into me, awful, awful nastiness.

“He’d just written a book and he’s got quotes from his book there and four or five of them are very, very lyrical.

“So I’ve stolen his best quotes and I’m going to put them into a song really soon, just to p**s him off. And there’s nothing he can do about it.”

THE Foo Fighters had better wake up soon, they’ve got a big job to do.

The band grabbed 40 winks draped in the Stars and Stripes ahead of their inauguration performance for US President-elect Joe Biden on Wednesday.

The show comes after they released their latest single, Waiting On A War, taken from their next album Medicine At Midnight, which is out next month.

Lead singer Dave Grohl revealed it was inspired by his daughter, who feared their country was going to war with North Korea last year. Cheery.

ROCKERS have famously taken drugs at Buckingham Palace but Rod Stewart was far tamer when he got knighted in 2016.

Harry Redknapp asked the singer when he guested on his podcast: “What did Prince William say to you when you were knighted?”

Rod replied: “He said,‘So are you still singing?’ I said, ‘Yeah mate, I’ve got a big family. I’ve got to’. It was a proud moment, though. I wish my dad had seen it.

“I went to the palace, got p***ed at lunchtime.

Keren recalled: “Sara had a video camera, and we started filming one another, swish­ing around the pool, waving our sarongs around with the James Bond theme blasting.

“George rushed outside to join in the fun. But later, when we tried to watch it back, the footage had disappeared.

“George must have sneaked into Sara’s room and erased it all.

“There had been a split sec­ond where he had revealed a little more of himself than he might have liked, but we were furious he’d deleted the whole tape.”

Feelings in the frame

MODEL Daisy Lowe and TV’s Anna Richardson are the judges in a photo exhibition on teenage mental health.

How Are You Feeling?, which goes on nationwide display next month, is organised by The Photography Movement, which focuses on taking pictures and mental health, and says it will “represent the emotions and experiences of young people”.

Photographer Rankin, who has been involved in the project, said: “I can’t wait to see the final selection of images and hear the voices of UK youth for this very special exhibition.”