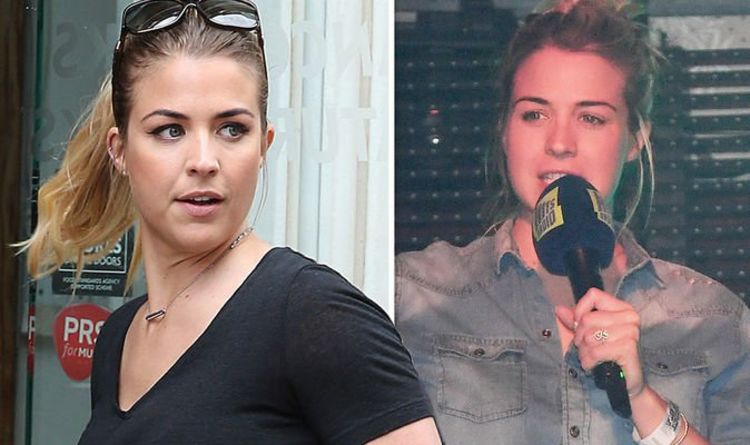 Before falling pregnant, Gemma was well known for her incredible gym-honed figure and fitness regimes.

The former Hollyoaks and Emmerdale actress would upload workouts with her personal trainer, ‘Evil Steve’, to share how she would achieve her muscular physique.

And Gemma has revealed after delivering Mia via a caesarean, she is now able to amp up her workouts and will be sharing them with her fans.

The former Strictly Come Dancing 2017 contestant posted a video of herself doing a challenging weight exercise with ‘Evil Steve’ motivating her.

Gemma could be seen squirming in the clip and at the end, gave him a cold, dirty look.

“The rage is real,” she began alongside a laughing emoji. “Today I booked in my first session back with Evil Steve.”

She revealed: “We’re starting in Oct! This is a reminder of how the sessions will be.”

Gemma went on to announce she and Steve had set up an online program where people can sign up and copy their workouts.

The new mum said: “Anyone wanting to train with me and Evil Steve but from the comfort of your own living room, and on your own time check out the program we created on @iamtv.fit it’s called STRONGER because that’s what you become. Mentally and physically!

“As a new mum I’m all for feeling mentally strong, not just for me, but for Mia as well.”

Gemma added: “There’s pre & post natal training programs on the @iamtv.fit platform too so it’s suitable for all of us no matter what level of fitness we’re at.”

Meanwhile, Gemma reminisced on her Strictly Come Dancing days ahead of this year’s series.

She shared a picture of herself on the launch day in full glam where she revealed it was the first time she had met Gorka.

“Exactly 2 years ago today on our Strictly launch,” Gemma wrote.

“I actually said to @cintalondon that evening at her house ‘so there’s this guy called Gorka’ to which she replied ‘hold on a minute, let me get us a drink and some nibbles’.”

Gemma reached the final of the series with Aljaž Škorjanec where Joe McFadden and Katya Jones ended up winning.