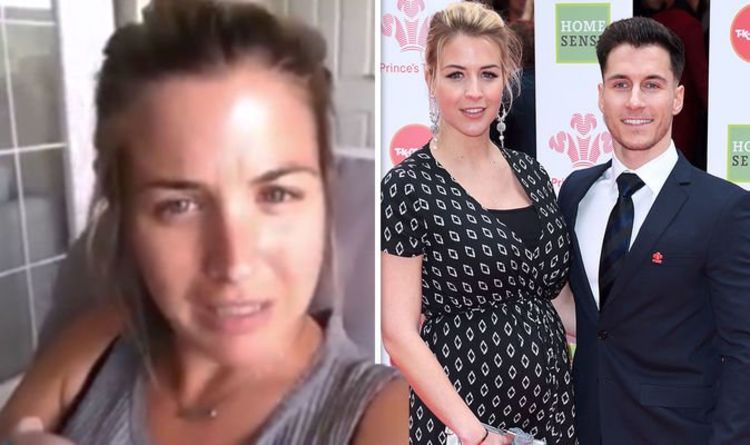 Gemma Atkinson, 34, got candid with her 1.2 million Instagram followers yesterday as she spoke out about her postpartum body. The former Strictly Come Dancing star shared the update in a video clip on her story as she rocked her newborn baby Mia to sleep. Opening up on her fitness progression, Gemma said: “Today we did a three mile walk with the pram and I made sure it was quite hilly.” The TV and radio personality then got interrupted by her daughter loudly sucking on her dummy, as she asked: “What’s the matter? Why you stressing for? Oh, you’re just getting comfy. She’s like Maggie from The Simpsons.”

After tending to Mia, Gemma continued: “So I pushed the pram and yeah I got a good sweat on, which was good and it was a lovely hot day, so it was better than my StairMaster.

“My pants are a little bit looser, I’m feeling really good and chuffed.”

However, the new mum also admitted she was being held back by the fact her uterus “hasn’t shrunk yet”.

Describing the revelation as “rank”, Gemma added: “My uterus hasn’t shrank yet – sorry lads, this is rank – but apparently it takes anywhere between six and 10 weeks to go back to normal.

“So it still looks like I’m wearing a little bumbag, which is a little reminder of where you came from…

“I’m eating really good food, sleeping when she does, when I can and just doing bits of cardio each day.”

The ex-Emmerdale actress explained she was progressing “slowly but surely”.

Later in the day, Gemma revealed her daughter missed out on witnessing her dad Gorka Marquez’s big Strictly Come Dancing moment on TV.

The blonde beauty filmed her professional dancer beau, 28, on the television as he showed off his moves in the trailer for this year’s series of the BBC show.

Addressing her daughter, she said: “Oh Mia, your daddy is going to be on soon!”

She then listed names of other professionals who appeared in the advert until Gorka appeared.

The camera then moved to show Mia peacefully sleeping, as the star sighed: “Oh you missed it.”

The actress jokingly captioned the video: “@gorka_marquez she’s not impressed just yet.”

Gemma’s post comes after she spoke out about the news about Gorka not having a celebrity dance partner on Strictly this year.

She wrote on Instagram: “Sad to not be seeing Gorks partnered up and fighting it out for the Glitterball this year. ‘He’s my favourite…’

“(Apart from team AliG obviously,)”(sic) she added, referring to her team name with her former dance partner Aljaz Skorjanec, 29.