Game of Thrones: Could Jon Snow have saved Daenerys Targaryen in marriage twist? 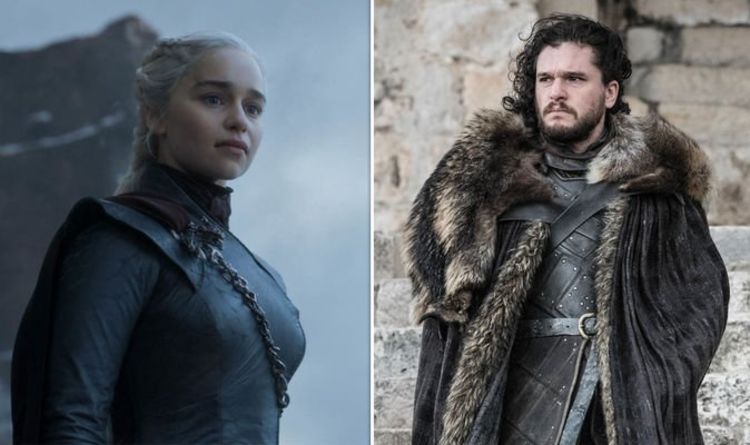 Later we saw Jon reveal to Daenerys that he is the son of her older brother Rhaegar Targaryen (Wilf Scolding) and Lyanna Stark (Aisling Franciosi) meaning the couple committed the crime of incest.

Of course, mad with power, Daenerys was more concerned he was a more rightful heir to the throne.

However, the topic of incest wishing the Seven Kingdoms proves complicated on the show, with some instances marriages accepted, and others where it was seen as an abomination.

Nonetheless, one fan claims the newfound relation between Jon and Daenerys would not have stopped the pair married and ruling together.

Taking to Reddit the user said: “In Season 8, a lot of people made a big deal about how the North doesn’t like the idea of people who are related marrying each other.

“However, I recently learned that Ned’s father Rickard Stark marred his cousin once removed, Lyarra Stark.

“I also remembered that Sansa was at one point supposed to marry her cousin Robin, who is related to her through Lysa (Sansa’s aunt and Catelyn’s sister). If this is all true, why would it be so weird for Jon to marry Daenerys?”

Indeed there seems to be some incidences where marriage between family members was almost overlooked, with the Targaryens being prime examples of this with Daenerys’ father Aegon marrying both his sisters.

However, the fan also referenced this kind of marriage had took place in the North before.

The fan added: “Sure, maybe marrying cousins or aunts today would be frowned upon in most societies.

“But it didn’t seem that taboo then (Jon’s grand-uncle literally married his own cousin, and marrying one’s aunt wouldn’t be that weird) so why did Jon and the other Northerners suddenly develop this 21st century popular culture mindset?”

Theory evoked a flood of comments as one fan agreed the pair could have married.

The user said: “I still think they have to get married in the books and the show just ran out of time. Even with the same ending, it would make sooooo much more/more intriguing drama to have a marriage/children in the dynamic.”

This comes after another fan speculated that Arya’s (Maisie Williams) dramatic finale moment where she slayed the Night King (Vladimir Furdik) could have been foreshadowed by her father Ned Stark (Sean Bean).

Reddit user lethalrxses wrote: “The scene is Arya’s lesson with Syrio Forel, Arya is attempting to attack Syrio to strike him and she’s genuinely enjoying it.

“Every time he catches her and says ‘Dead’ she chuckles a little bit. Cut to Ned standing in the door way watching somewhat proudly and chuckling under his breath.

“Then it’s almost like he has a flashback (or possible foreshadowing) to the sounds of a roaring battle and swords clashing and his face drops and it almost looks like he grows pale.”

Could Ned have trained Arya because he foresaw the Battle of Winterfell?

Game of Thrones aired on HBO and UK fans can catch up on the final season via Sky Atlantic and NOW TV.