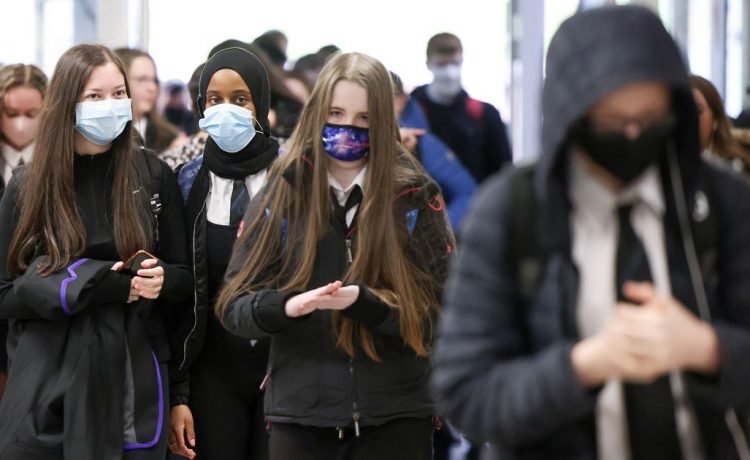 New plans for teachers to assess GCSE and A-Level pupils could lead to a “wild west of grading”, the Government has been warned.

Gavin Williamson unveiled the new blueprint on Thursday as ministers scramble to avert another summer of chaos after exams were cancelled in England for the second year in a row.

Teachers will be given powers to decide results for exam year pupils using a mix of coursework, mocks and mini classroom assessments, such as tests and essays.

The Education Secretary decided to ditch the controversial algorithm used to standardise results last year, which led to a fiasco when thousands of students had their marks downgraded.

Instead, grades will be submitted to exam boards for scrutiny.

The Government hopes the move will prevent a repeat of last year’s fiasco but it is already sparking concern from some MPs, teachers and education experts.

Tory Education Committee chairman Robert Halfon challenged Mr Williamson in the Commons over the threat of grade inflation, which he said could damage children’s life chances.

He said: “The decision to adopt centre assessed for the second year in a row does highlight the severity of the damage school closures have done and whilst I accept that it’s the least worst option that the Government has come up with, my concern is not so much about having one’s cake and eating it, but baking a rock cake of grade inflation into the system.

“So will he confirm what is the Government’s plan to ensure we will not have a wild west of grading, that these grades will be meaningful to employers so as not to damage children’s life chances and when?”

He insisted it was better to rely on teachers, saying: “Ultimately, this summer’s assessments will ensure fair routes to the next stages of education or the start of their career.”

Here we look at the exams blueprint and what could go wrong this summer.

What is the plan?

Formal exams have been scrapped this year due to the ongoing disruption caused by the pandemic.

Instead, teachers will determine a pupil’s mark using things like mock exams, coursework or other class work, such as essays or in-class tests.

Exam boards will prepare questions in different subjects that teachers can use if they want to, and schools can decide if these are done under exam conditions or at home.

Students can only be assessed on things they have been taught this year, in recognition of the massive disruption school closures have had on their eduction.

Teachers will have to submit their assessments, along with evidence, by June 18.

This evidence may be important for students who want to appeal their grades.

Mr Williamson said exam boards will carry out checks to “root out malpractice”, which will include spot checks on schools.

When will I find out my results?

Students will get their grades a bit earlier this year – in the week of August 9.

Results days have been shifted forward by two weeks to give pupils more time to appeal their grades if they wish.

This is particularly important for students going on to university or training courses where they could lose their place if their grades are lower than expected.

All students will be allowed to appeal their marks.

What is grade inflation and why are people worried?

One of the big concerns about the plan is that it could lead to grade inflation – where more students get top grades than in normal years.

This can be a problem if it means that the highest marks lose their value.

Mr Williamson confirmed there will be “no algorithm” used to moderate grades, relying instead on the judgement of teachers.

He told MPs: “Teachers have a good understanding of their students’ performance and how they compare to other students this year and from those of previous years.”

The Education Secretary said teachers would be given guidance around grading and there would be checks by schools and exam boards to make sure the system is fair.

“Quality assurance by the exam boards will provide a meaningful check in the system and make sure we can root out malpractice,” he said.

However critics are concerned that failing to peg this year’s marks to previous years will mean inconsistencies in marks and mass grade inflation.

Natalie Perera, chief executive of the Education Policy Institute, said: “Without timely and detailed guidance for schools on how this year’s grades should be benchmarked against previous years, and with classroom assessments only being optional, there is a significant risk that schools will take very different approaches to grading.”

She said this could lead to “extremely high grade inflation, which could be of little value to colleges, universities, employers and young people themselves”.

Robert Halfon, the Tory chairman of the Education Committee, also warned that ministers risked “baking a rock cake of grade inflation into the system” – which he said could damage children’s life chances.

There is expected to be a flurry of appeals after the grades come out – hence the decision to move results day forward to give officials time to process complaints.

Natalie Perera, of the EPI, warned that inconsistencies in grading could lead to “large numbers of pupils appealing their grades this year”.

Officials are expected to prioritise those pupils who could lose out on university or college places, or jobs if they miss out on their grades.

But an avalanche of complaints could put the system under serious strain.

How will teachers cope?

Unions have raised concerns about extra workload for teachers in preparing assessments for all pupils.

Dr Mary Bousted, joint General Secretary of the National Education Union, said the move was the “least worst option available” but questioned how teachers would manage.

“Substantial time will need to be set aside for the initial assessments and gradings and then the internal school moderation processes; it may well be that extra staff need to be employed to release teachers for this important work,” she said.

Teachers could also come under pressure from angry parents over grades.

Sir Jon Coles, a former director-general at the Department for Education who is said to have resigned from his role as an Ofqual advisor on exams, tweeted: “The system appears to: open teachers/schools to substantial pressure from parents to inflate before and at the point of awarding; create a lot of work; and risk a situation where in August teachers will be under fire for highly inflated results.”