Facebook is looking to its groups to help crack down on harmful content emanating from the platform.

In a tandem of blog posts this week, Facebook detailed two major changes to its user-created groups feature  — one of which will simplify privacy settings across the platform.

According to the company, groups will now have just two privacy settings, public or private, doing away with the platform’s former ‘secret’ and ‘closed’ options.

Secret groups differed from their private counterparts in two ways: one being that the community would not be searchable to broader community and another being that only those who were invited by a member of the group could join. 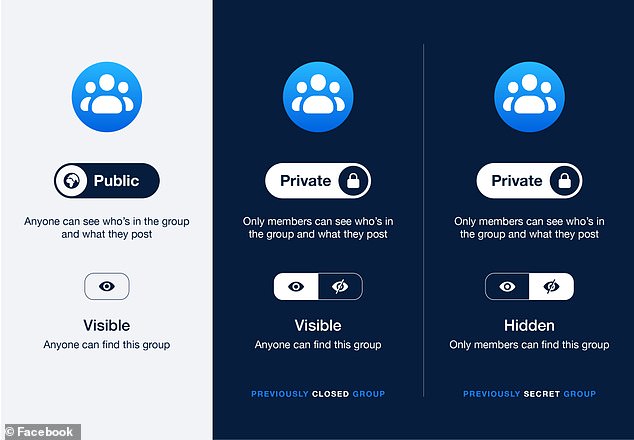 Closed groups, however, were invite-only but searchable to any Facebook member.

Facebook said it will still let groups remain unsearchable by allowing them to toggle between ‘hidden’ and ‘visible.’

‘With two clear options, this new privacy model is much more intuitive. Public groups allow anyone to see who’s in the group and everything that’s shared there,’ said Facebook in a blog post.

‘With private groups, only members can see who else is in the group and what they’ve posted.’

Facebook says that groups that were formerly secret will now default to private and hidden, while ‘closed’ groups will be private and visible.

In a separate change to its groups feature, Facebook will also take a more direct stab at curbing unwanted content that happens inside the communities through more user moderation tools.

The tool set called ‘Group Quality’ will aim to keep administrators of groups abreast of the content and conversations happening between members, in specific, when and if that content violates community standards.

‘Admins know their communities best, and we want to empower them to run meaningful groups’ said Facebook.

‘That’s why we built Group Quality, which gives admins an overview of content Facebook has removed and flagged to them for most Community Standards violations.’ 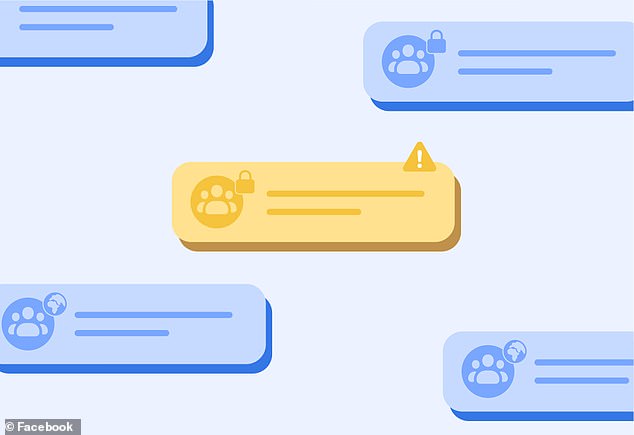 Facebook hopes that by empowering administrators, groups can self-moderate conversations and consent.

The company noted that it has also put work into a its artificial intelligence designed to identify toxic content as well as its process for deciding when to shut groups down or remove content.

Recently, Facebook’s groups have come under increased scrutiny for — among other things — acting as an breeding ground for fake Amazon groups.

This month, consumer group Which? claimed its own investigation found dozens of groups on Facebook that are recruiting people to write fake Amazon reviews and called on the UK’s Competition and Markets Authority to consider taking action against Facebook over the issue.