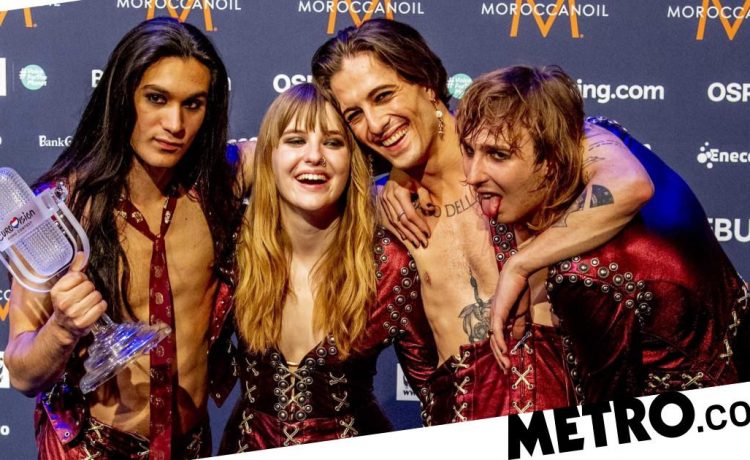 The Italian rockers won over Europe last Saturday when their song edged out France, Switzerland, Iceland and Ukraine to the top of the leaderboard at the Eurovision Song Contest, with 524 points – 25 more than their closest competitor, France’s Barbara Pravi.

Now, Måneskin have entered the UK charts for the first time, with Zitti E Buoni landing at number 17.

While Måneskin managed to crack the top 20 with their winning song, which is sung in Italian, a push to get James Newman’s nul point track Embers into the top 40 hasn’t worked out, despite the UK’s Eurovision entry doing well on the iTunes chart earlier this week.

Zitti E Buoni is now one of the highest charting Eurovision songs of the last 10 years, outdoing all the UK’s entries.

Since 2011, Jedward’s Lipstick charted at 40, Emmelie De Forest’s 2013 winner Only Teardrops at 15, The Common Linnets’ Calm After The Storm hit number nine, Conchita Wurst’s winner Rise Like A Phoenix made it to 17, Undo by Sanna Nielsen broke the top 40, and Måns Zelmerlöw’s Heroes made it to number 11.

Duncan Laurence’s winning song for The Netherlands, Arcade, peaked at number 29 this year after going viral on TikTok two years after he won, and is currently the most-streamed Eurovision song of all time in the UK.

Loreen’s Euphoria is the most successful Eurovision song in the UK charts since the 1990s, reaching number three in 2012.

Måneskin won over Europe with their energetic performance and skintight outfits, but also caused controversy when lead singer Damiano was accused of snorting cocaine in the green room, after being filmed leaning over a table on live TV.

However, Damiano vehemently denied the claims, saying he had been looking down at a broken glass on the floor, and drug tests proved that he had not been taking cocaine.

Elsewhere on the charts, BTS have cracked the top five yet again with their new single Butter, making it to number three.

However, it’s Olivia Rodrigo who sits at number one this week, not only on the singles chart, but the album chart too.

At 18 years and three months old, the star has become the youngest person in UK chart history to do the double, as her debut album Sour and the single Good 4 U both hit the top spot.


MORE : Line of Duty creator finally clears up the motive behind that frustrating James Nesbitt cameo