The Earth has inspired many a famous tune — from Michael Jackson’s ‘Earth Song’ to Björk’s ‘Earth Intruders’ — but now the blue planet has a song of its very own.

Astronomers have recorded for the first time the eerie warbling ‘song’ sung by the Earth’s magnetic field when hit by a storm of charged particles sent from the Sun.

The ‘tune’ is a sonic version of the stunning aurora light show that can be seen near the poles when charged particles interact with the Earth’s atmosphere. 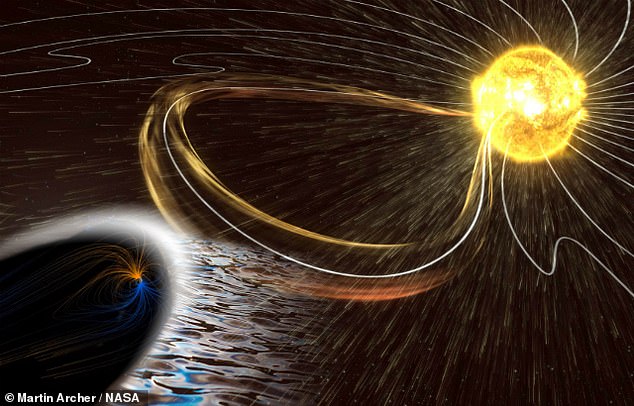 Astronomers have recorded for the first time the eerie warbling ‘song’ sung by the Earth’s magnetic field when hit by a storm of charged particles sent from the Sun, as pictured in this artist’s impression. The ‘tune’ is a sonic version of the stunning aurora light show

WHAT ARE THE CLUSTER II SPACECRAFT?

Cluster II is name given to four European Space Agency satellites that fly in formation through the Earth’s magnetosphere.

Launched in 2000, the Cluster probes have been analysing the Earth’s vast magnetic field for almost two decades.

The Cluster II spacecraft were built to replace to original Cluster probes which were destroyed during a failed launch. 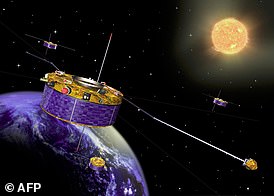 The ‘song’ was made audible by experts from the European Space Agency (ESA), who analysed the magnetic waves produced as these ‘solar winds’ buffet the Earth.

They turned the results into audible frequencies, producing an unusual noise they described as being more like ‘the sound effects of a science fiction movie than a natural phenomenon.’

The psychedelic song was identified after the team sent four spacecraft through the so-called ‘foreshock’ region of the Earth’s magnetic field, which faces the Sun and is the first part to be impacted by incoming solar storms.

Normally, the constant flow of charged particles that makes up the solar wind causes the foreshock to emit simple magnetic waves that — when converted into audio waves — sound something like a single, low musical note.

When a solar storm strikes the Earth, however, the impact of it against the magnetic field’s foreshock causes this ‘music’ to rise in pitch — and become far more complex.

‘It is like the storm is changing the tuning of the foreshock,’ said paper author and space physicist Lucile Turc of the University of Helsinki in Finland.

Data for the study was collected by the ESA’s Cluster II mission, which placed four identical spacecraft, flying in formation, in the Earth’s so-called magnetosphere.

Launched in 2000, the probes have been analysing Earth’s vast magnetic field now for almost two decades.

The magnetic field acts like an invisible ‘bubble’, protecting life on Earth from the stream of charged particles — specifically electrons and protons — that are blasted out continuously from the Sun.

READ  Biodiversity in Britain at risk from standstill due to coronavirus

In the early part of their mission, from 2001 to 2005, the probes flew through six collisions between the foreshock and a solar storm, recording the waves that were generated.

Normally, the constant flow of charged particles that makes up the solar wind causes the foreshock to emit simple magnetic waves that — when converted into audio waves — sound something like a single, low musical note (visualised left). When a solar storm strikes the Earth, however, the impact of it against the magnetic field’s foreshock causes this ‘music’ to rise in pitch — and become far more complex (as seen on the right)

The team used computer simulations to reveal the the intricate wave patterns that emerge during solar storms.

It is a fast process, with the wave generated at the foreshock reaching the ground taking in around 10 minutes.

The researchers are now working to understand exactly how these complex waves are generated.

‘We always expected a change in frequency — but not the level of complexity in the wave,’ Dr Turc said.

Solar storms are a part of space weather. While the solar wind is always blowing, explosive releases of energy close to the Sun’s surface generate turbulence and gusts that eventually give rise to solar storms.

Understanding space weather has become increasingly important to society because of the damaging effects solar storms can have on sensitive electronics and technology both on the ground and in space.

‘This is an excellent example of how Cluster continues to extend our knowledge of the Sun–Earth connection, even years after the original data was obtained,’ added author Philippe Escoubet of the European Space Research and Technology Centre.

‘The results take us deeper into the details of fundamental magnetic interactions that take place across the universe.’

The full findings of the study were published in the journal Geophysical Research Letters.

HOW IS THE SOLAR WIND FORMED?

The sun and its atmosphere are made of plasma – a mix of positively and negatively charged particles which have separated at extremely high temperatures, that both carries and travels along magnetic field lines.

Material from the corona streams out into space, filling the solar system with the solar wind.

But scientists found that as the plasma travels further away from the sun, things change.

Views of the solar wind from NASA’s STEREO spacecraft (left) and after computer processing (right). Scientists used an algorithm to dim the appearance of bright stars and dust in images of the faint solar wind

The sun begins to lose magnetic control, forming the boundary that defines the outer corona – the very edge of the sun.

The breakup of the rays is similar to the way water shoots out from a squirt gun.

First, the water is a smooth and unified stream, but it eventually breaks up into droplets, then smaller drops and eventually a fine, misty spray.

A recent Nasa study captured the plasma at the same stage where a stream of water gradually disintegrates into droplets.

If charged particles from solar winds hit Earth’s magnectic field, this can cause problems for satellite and communication equipment.