NewsGroove Uk
NewsGroove Uk > Politics > EU CAVES: Juncker tells Boris Brussels will do 'everything it can' to stop no deal Brexit
Politics

EU CAVES: Juncker tells Boris Brussels will do 'everything it can' to stop no deal Brexit 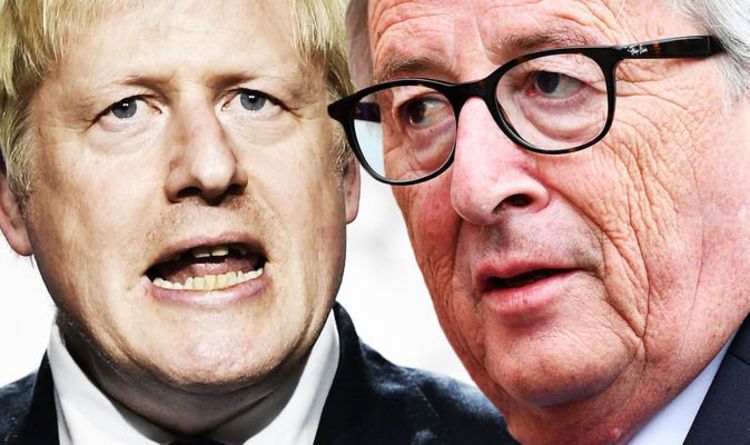 In growing sign that Brussels is preparing for a Brexit climbdown, the Prime Minister was asked to reveal how he plans to replace the controversial Northern Ireland backstop. During a phone call with the European Commission President, he was told that Brussels would consider any proposals that are “compatible with the withdrawal agreement”. Mr Juncker offered to work “constructively” with Mr Johnson in order to prevent a no-deal Brexit.

The EU chief, however, signalled he was not prepared to sanction a compromise that doesn’t have the support of Dublin.

“The call followed their first exchange on July 25 and was an opportunity for the two to touch base after the G7 summit.

“President Juncker repeated willingness to work constructively with Prime Minister Johnson and to look at any concrete proposals he may have, as long as they are compatible with the withdrawal agreement.

“President Juncker underlined the EU27’s support for Ireland is steadfast and that the EU will continue to be very attentive to Ireland’s interests.

“Finally, he recalled that while the EU is fully prepared for a no-deal scenario, it will do everything it can to avoid such a situation. A no-deal scenario will only ever be the UK’s decision, not the EU’s.”

The call came as part of Mr Johnson’s recent diplomatic blitz, in an effort to convince EU leaders to drop their support for the backstop.

The Prime Minister has repeatedly warned his European counterparts that they must accept his demands in order for there to be a Brexit deal.

JUST IN: ‘They are not thinking about us!’ Brexiteer lashes out at MPs for trying to thwart no deal exit

“If you talk to our friends as I have done over the last few weeks, they are very enthusiastic about getting on with the future.

“They regard Brexit now as an encumbrance: they want to talk about a new partnership, ways we can work together in trade and security.”

Mij Rahman, the head of Europe for the Eurasia Group, said the EU is manoeuvring to ensure it cannot be blamed for a no-deal Brexit.

He said: “The EU will engage in this process earnestly but also tactically so they can’t be blamed for no deal should the effort fail.”