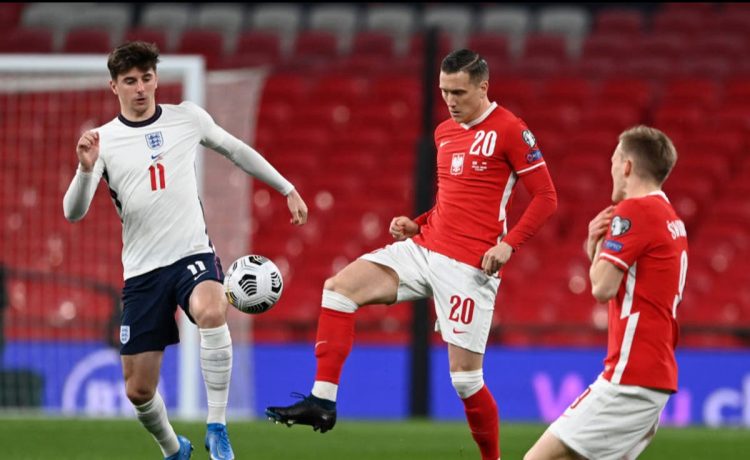 Follow all the action as England welcome Poland to Wembley in tonight’s crucial World Cup qualifier.

Gareth Southgate’s side surged to a 5-0 victory against San Marino in the first outing of their campaign before a comfortable 2-0 win against Albania last weekend. Tonight’s match will act as a final audition for players hoping to secure their places at the Euros this summer, with the head coach admitting his first team is already close to being finalised.

England are the only side in Group I to have won both of their opening two matches as the Three Lions attempt to avoid any slip-ups on the road to Qatar 2022, but Poland does represent a significant step up in opposition, even without star striker Robert Lewandowski, who has been ruled out for four weeks due to a knee injury. “It’s the last chance to put on a performance,” Declan Rice said ahead of tonight’s game. “No disrespect to San Marino and Albania but it will be a real step up and closer to the opposition we’ll be facing in the Euros. It’s a real chance to make a statement.” Follow all the action live below:

3 mins: England have controlled the ball well over these opening minutes. Poland pressed into England’s half but Kalvin Phillips and Declan Rice do well to work the ball into space and beat the press. Mount receives the ball on the left hand side and whips a cross into the box but it gets cleared by a Maciej Rybus diving header.

Kick off: Just one change for England since their win over Albania at the weekend. Ben Chilwell is in for Luke Shaw. Mason Mount gets the match underway, victory tonight will give England a four point lead in their World Cup qualifying group.

Harry Kane leads England out onto the pitch at Wembley. The next time the Three Lions line up here will be at the European Championship this summer. Can they win tonight and take that momentum into the tournament?

John Stones has had an impressive season, playing himself back into the Man City team and then the England squad. He partners Harry Maguire at centre-back tonight, has his return to form come at the perfect time for him to claim a spot at the Euros?

Nick Pope has kept a clean sheet in each of his six England appearances, the first Three Lions goalkeeper not to concede in any of their first six caps.

Is a seventh on the cards tonight?

Gareth Southgate spoke about the threat Poland can still create without Robert Lewandowski. He said:

Southgate not thinking about Euros

England boss Gareth Southgate says his main focus is on winning tonight’s game and picking up another three points towards World Cup qualification and that the Euros will ‘take care of itself’.

No Lewandowski for Poland

Poland come into the match with a weakened squad. Over the international break they’ve had to deal with positive Covid tests – for Lukasz Skorupski and Leeds midfielder Mateusz Klich – and they come to Wembley without their star striker, Robert Lewandowski, who is injured.

The 32-year-old has scored 47 goals in 42 appearances for club and country this season, including two against Andorra and another in the 3-3 draw with Hungary this international break.

His absence will go a long way to helping England win this game even if it means a less sterner test for the Three Lions.

Who’s on the bus?

These three World Cup qualifiers, against San Marino, Albania and Poland, are the last competitive games that England will play before the European Championship this summer. They’re a last chance for Gareth Southgate to take a look at his players and finalise his squad for the tournament:

Since losing three games in the 2014 World Cup qualification campaign, including one to England, Poland have lost just three of their subsequent 32 matches in World Cup/European Championship qualifying with 23 wins and six draws.