Elon Musk claims humans will soon be 'far, far surpassed in every single way' by computers 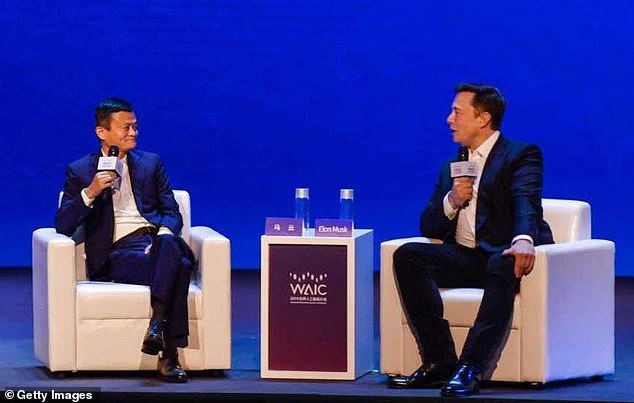 Elon Musk claims humans will soon be ‘far, far surpassed in every single way’ by computer

Elon Musk has warned that that humans will be ‘far, far surpassed in every single way’ by computers.

The billionaire made the remarks while debating Alibaba chairman Jack Ma at the World Artificial Intelligence Conference in Shanghai, China.

‘We will be far, far surpassed in every single way. I guarantee it,’ Musk told Ma.

He also claimed that Neuralink, a company he founded in July 2016, could one day help people level the playing field with intelligent machines.

Neuralink is working to link the human brain with machines by creating tiny implants that would let people download information from computers.

Elon Musk has warned that that humans will be ‘far, far surpassed in every single way’ by computers. The billionaire made the remarks while debating Alibaba chairman Jack Ma at the World Artificial Intelligence Conference in Shanghai, China (pictured)

Elon Musk’s latest company Neuralink is working to link the human brain with a machine interface by creating micron-sized devices.

Neuralink was registered in California as a ‘medical research’ company in July 2016, and Musk plans on funding the company mostly by himself.

It will work on what Musk calls the ‘neural lace’ technology, implanting tiny brain electrodes that may one day upload and download thoughts.

And in eight to ten years, the Matrix-style technology will be available to everyone, he added.

‘A lot of them cannot imagine something that is smarter than them but AI will be vastly smarter. Vastly.’

Musk highlighted advances in AlphaGo, part of Google’s DeepMind project, at conquering the ancient Chinese board game Go as evidence of the rapid progress of AI.

Go is favoured by AI researchers because of the large number of outcomes compared to other games such as western chess, which AIs have already mastered.

‘Your cell phone could crush the world champion of chess, literally,’ Musk told Ma, according to reports in CNBC.

Ma disagreed, however, pointing out that a computer has never created a human being, or even a mosquito.

‘I’ve never in my life, especially [in the] last two years, when people talk about AI, human beings will be controlled by machines,’ he said.

‘I never think about that. It’s impossible.’ 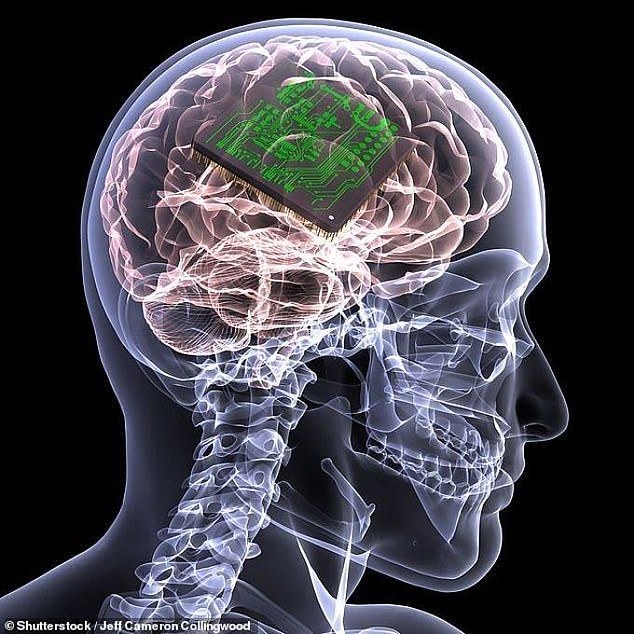 Musk also claimed that Neuralink, a company he founded in July 2016, could one day help people level the playing field with intelligent machines by creating tiny implants that would let people download information from computers (stock image)

Musk has long been a critic of artificial intelligence, warning that should it fall into the wrong hands or become too smart, it could wreak havoc on the world.

The SpaceX and Tesla CEO has claimed that they pose a greater threat to humanity than nuclear war.

In 2014 he said ‘If I were to guess like what our biggest existential threat is, it’s probably that.’

He has previously claimed that the there is ‘a five to 10 per cent chance of success’ of making AI safe.’

He also envisions other applications for the technology, including in the field of medicine.

One specific use would be reducing memory loss or curing spinal cord injuries, by implanting electrodes into the motor cortex of the brain.

A TIMELINE OF ELON MUSK’S COMMENTS ON AI 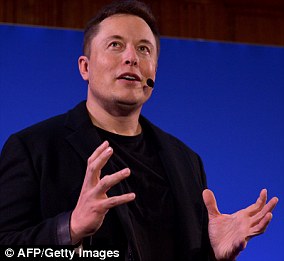 Musk has been a long-standing, and very vocal, condemner of AI technology and the precautions humans should take

Elon Musk is one of the most prominent names and faces in developing technologies.

The billionaire entrepreneur heads up SpaceX, Tesla and the Boring company.

But while he is on the forefront of creating AI technologies, he is also acutely aware of its dangers.

Here is a comprehensive timeline of all Musk’s premonitions, thoughts and warnings about AI, so far.

August 2014 – ‘We need to be super careful with AI. Potentially more dangerous than nukes.’

October 2014 – ‘With artificial intelligence we are summoning the demon.’

June 2016 – ‘The benign situation with ultra-intelligent AI is that we would be so far below in intelligence we’d be like a pet, or a house cat.’

July 2017 – ‘I think AI is something that is risky at the civilisation level, not merely at the individual risk level, and that’s why it really demands a lot of safety research.’

July 2017 – ‘I have exposure to the very most cutting-edge AI and I think people should be really concerned about it.’

July 2017 – ‘I keep sounding the alarm bell but until people see robots going down the street killing people, they don’t know how to react because it seems so ethereal.’

August 2017 –  ‘If you’re not concerned about AI safety, you should be. Vastly more risk than North Korea.’

March 2018 – ‘AI is much more dangerous than nukes. So why do we have no regulatory oversight?’

April 2018 – ‘[AI is] a very important subject. It’s going to affect our lives in ways we can’t even imagine right now.’

April 2018 – ‘[We could create] an immortal dictator from which we would never escape.’