El Camino: what to expect from the Breaking Bad movie 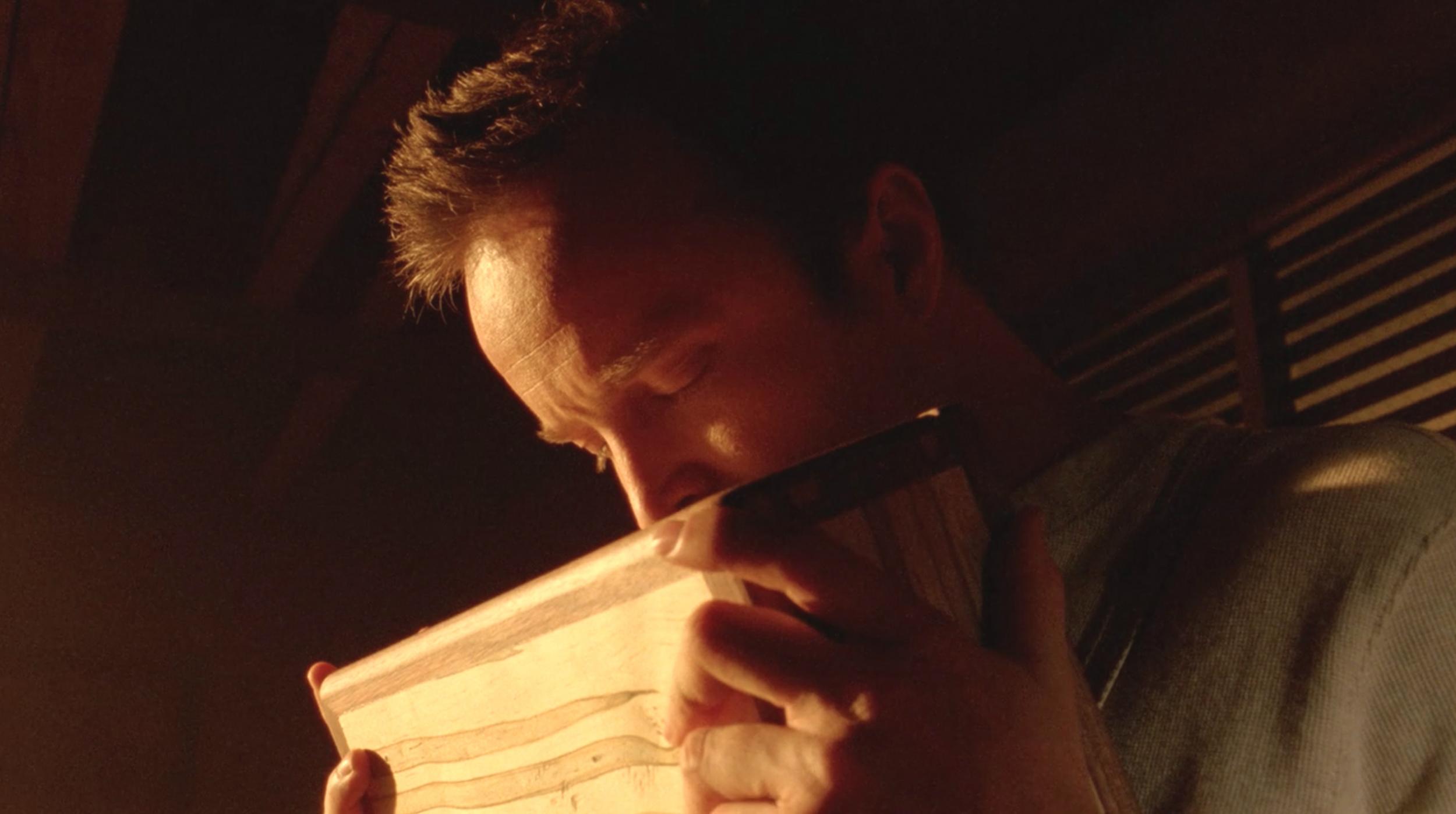 El Camino: A Breaking Bad Movie is arriving on Netflix on 11 October. The annoucement was made seemingly by mistake, with the trailer just appearing on Netflix’s Coming Soon section in August. To some, it seemed like an uncalculated move considering that Netflix’s new rival, Disney, was dropping major news left and right during their high-profile D23 Expo. Perhaps it was a chance to steal a bit of the House of Mouse’s thunder, announcing one of the most anticipated, and frankly unexpected, franchise extensions in recent memory.

Nevertheless, After the first teaser trailer broke, star Aaron Paul used his Twitter account to call attention to a scene from Breaking Bad season 3, episode 7 ‘One Minute’, written by Thomas Schnauz and directed by Michelle MacLaren, in which Jesse emotionally rips into Walter for ruining his life. “Ever since I met you, everything I ever cared about is gone, ruined, turned to shit, dead,” he cries. “Ever since I hooked up with the great Heisenberg. I have never been more alone. I have nothing! No one. Alright? And it’s all gone! Get it? No, why would you even care? As long as you get what you want, right? You don’t give a shit about me.”

Little does the Season 3 version of Jesse know that his life is only going to get worse. After losing Jane, he will go on to lose Andrea and a father figure in Mike. He will be held against his will, caged, tortured, and forced to murder his chief tormentor, Todd, with his bare hands. Not only will Jesse have to process these unimaginable losses and nightmarish experiences, he’ll have to grapple with his part in Heisenberg’s rise, the other lives claimed by that ascension, and with his feelings toward his old “partner,” the cause of his pain and the reason for his release. With all of this reflection and burdensome emotional work to do, it’s also possible that Jesse will realise that he hasn’t lost everything, or everyone.

Listing out everyone that is still alive in the Breaking Bad universe post-‘Felina‘ doesn’t seem entirely necessary. Though it’s likely that a few supporting and tertiary characters, like Skinny Pete, will appear, ultimately many of our remaining players don’t feel essential to Jesse’s story or the journey that he has ahead of him. What do members of Walt’s family matter to Jesse? Why would he care about or be drawn to any of his old business associates, like Saul or Huell, unless for revenge? Would more violence really be on this plagued man’s mind? It seems doubtful.

However, there are two characters who appeared on the show that could be essential or play pivotal roles in Jesse’s healing process. Starting with the more obscure option is Jesse’s brother, Jake Pinkman. Jake only appeared in one episode of Breaking Bad, but his role helped establish Jesse’s background and home life. The younger of the two siblings, Jake is framed as the opposite of his brother, as he’s shown as academically gifted and celebrated by his parents. Jesse’s parents worry that Jesse is a bad influence on Jake, but Jake tells Jesse that, despite it appearing that he is the favourite Pinkman child, their parents can never stop talking about Jesse. Later in the episode, when a joint is discovered in the Pinkman home and it’s believed to be Jesse’s when it actually belongs to Jake, Jesse takes the fall for his brother. He then crushes the joint, preventing his brother from smoking it.

If the descriptions of these scenes read as small and inconsequential, it’s because for the most part, they are. Yet the glimpse at Jesse’s home life has always stuck out due to the compassion and empathy that the brothers appear to share for one another and the juxtaposition of their lives. The Pinkman brothers represent the road not taken for each other, and it’s interesting to think about their paths crossing once again. After all, following Jesse burning the bridge with his parents after he bought their home, Jake is the only real family that Jesse has left.

A different remaining thread from Jesse’s life seems like the more obvious choice for inclusion in El Camino. Brock Cantillo, the six-year old son of Andrea, played an important part in Walt’s manipulation of Jesse, which found Brock poisoned to motivate Jesse into helping Walt kill antagonist Gustavo Fring. As something of a surrogate father to Brock, Jesse takes his presumed role in Brock’s poisoning hard. Jesse takes it even harder, going completely nuclear, when he finds out that Walt was really the man behind the poisoning. Jesse’s fury leads to his alignment with DEA Agents Hank Schrader and Steve Gomez, and from there, to those men’s deaths and Jesse’s capture by neo-Nazis. When Jesse tries to escape his captors, Andrea is executed in front of him as punishment.

What happens to Brock after his mother’s death is one of the biggest unknowns remaining after Breaking Bad’s finale. Jesse had genuine love and affection for Brock, but his illegal activities destroyed Brock’s family. Not only did Jesse’s involvement in a drug empire lead to Andrea’s death, but it also indirectly caused the death of Brock’s uncle and Andrea’s brother, Tomás Cantillo. Tomás, an 11-year old boy, served as a drug runner for two of Gus’ street dealers, and as a part of his initiation, he was forced to murder Jesse’s associate, Combo. Jesse’s vendetta against the street dealers that ordered Tomás to kill Combo leads Gus to declare that no more children should be used in their operation. In the aftermath, the dealers kill Tomás.

In an indirect way, Jesse’s influence on Brock’s life is similar to the ways that Walt destroyed Jesse’s life and relationships. Jesse never acted as intentionally malicious, but the outcome on Brock’s life is eerily similar. It’s not hard to imagine a teenage or adult Brock lashing out at Jesse in the same way that he berated Walt in that Season 3 episode. It’s reasonable to suspect that Jesse has had this thought as well, and he may want to atone for the ways in which he’s irreversibly impacted the course of Brock’s life. Jesse has the chance to apologise and give closure to Brock in a way that he never received from the monster in his life, Walt.

Jesse can also offer closure to a pair of characters that we’ve never met. One of the most shocking and memorable victims of Walt and Jesse’s crimes is Drew Sharp, the boy on the dirt bike who came across Walt, Jesse, and Todd after their successful train heist in Season 5. Though he was oblivious to the crime that took place, Todd mercilessly shoots the boy dead, to Jesse’s complete horror. The audience learns that a manhunt is launched by Drew’s parents, and to avoid his body being discovered and being linked to the crime, the trio dissolve Drew’s corpse and dirt bike in hydrofluoric acid. Not ever learning the truth about what happened to their son likely wrecked the Sharps. Jesse has the ability to tell the family the truth and give them a small piece of closure, even if he can’t change the unspeakable crime that took place.

Still, El Camino doesn’t need to mine the past entirely to find fruitful material. Jesse Pinkman, his freedom and healing, will absolutely be the focus of the film, but new point-of-view characters could help move the story along and breathe new life into the material in the same way that new characters like Kim enhanced Better Call Saul’s storytelling. Perhaps a POV federal agent tasked with hunting Jesse down could be a fascinating counterpoint to Jesse. Switching back and force between Jesse’s internal struggles and the external struggle to find this at-large criminal could be an interesting dichotomy. A new love interest could also be fertile ground for thought-provoking character work. Jesse’s past relationships ended incredibly tragically. Having someone enter his life to convince him to allow others to get close without fear of something catastrophic happening is something Jesse will have to face if he’s to ever move past his damage.

Thankfully, we won’t have to speculate what could happen in El Camino for much longer, as the Netflix release date is coming sooner than anyone anticipated when the project was announced. By the time sites like this one became aware of the sequel, Paul says, “The movie had already happened and was in the can. It was done.” There’s no bother in speculating whether the story will be a worthwhile and worthy addition to the Breaking Bad cannon, either. Vince Gilligan and his many Breaking Bad collaborators have more than earned audiences’ faith with Better Call Saul. If that series has taught us anything, it’s that there’s other rich and unexpected corners of this world left to explore, and Gilligan and Co. are the men and women to do it. El Camino is barreling toward audiences on 11 October; stop worrying and buckle up.