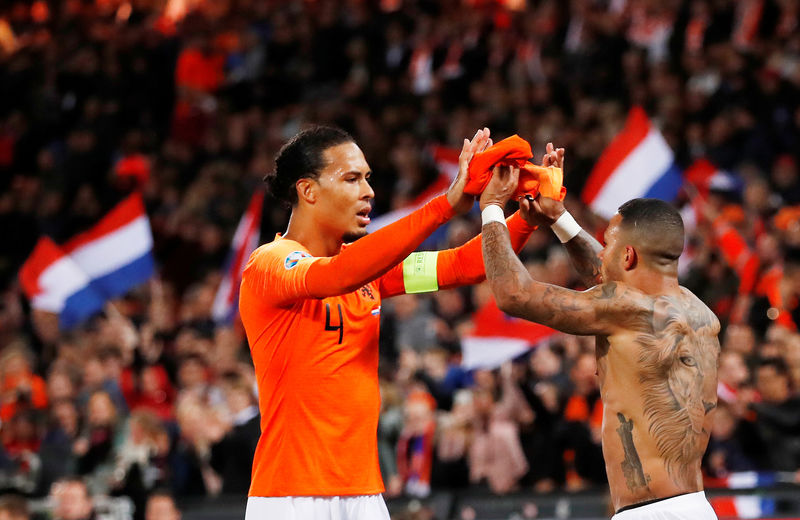 ROTTERDAM (Reuters) – Memphis Depay scored twice and Luuk de Jong was also on target as the Netherlands came back from a goal down with 10 minutes left to beat Northern Ireland 3-1 in their Euro 2020 qualifier in Rotterdam on Thursday.

It was a fortunate escape for the home side who fell behind when Josh Magennis gave Northern Ireland the lead in the 75th minute after a stout defensive performance had frustrated the hosts.

Yet the Dutch responded with an equaliser from Depay in the 80th minute and then two stoppage-time goals that put them in a three-way tie at the top of Group C.

Netherlands, Germany and Northern Ireland all have 12 points, although the Irish have played a game more.

Daley Blind miscued two attempted clearances and was then beaten by Dallas, whose cross was expertly met by Magennis as he rose above Matthijs de Ligt to score.

Depay toe-poked home the equaliser from a square ball by Donyell Malen that eluded the Northern Irish defence, as the visitors’ lead lasted just five minutes.

Then, as the game went into stoppage time, substitute De Jong needed two chances before finishing at the back post before Depay made sure of a vital three points with another goal after being set up by Frenkie de Jong.

“We were patient, we kept looking for goals and we got our reward for our second-half performance where we put on the pressure.

“In the end it was a deserved win with an outstanding reaction,” he told NOS.

Yet it was a frustrating night for the Dutch, who did not manage an effort on the visitors’ goal until just before the half-hour mark when Steven Bergwijn’s shot was blocked.

It took 44 minutes before Northern Ireland goalkeeper Bailey Peacock-Farrell actually had to make an intervention, easily collecting the ball as Georginio Wijnaldum’s attempted header looped up into the air.

The Dutch ratcheted up the pressure in the second half when Donny van de Beek came on, with centre back Jonny Evans clearing his lines in the 71st minute as Wijnaldum looked to steer the ball home from a difficult angle.

Yet then Magennis silenced the home fans before the Dutch picked themselves up for a grand finale.

Earlier on Thursday, bottom team Estonia picked up their first point with a goalless draw away in Minsk against Belarus.

The pair are already out of contention in the group with Belarus second from bottom on four points after six games.

Disclaimer: Fusion Media would like to remind you that the data contained in this website is not necessarily real-time nor accurate. All CFDs (stocks, indexes, futures) and Forex prices are not provided by exchanges but rather by market makers, and so prices may not be accurate and may differ from the actual market price, meaning prices are indicative and not appropriate for trading purposes. Therefore Fusion Media doesn`t bear any responsibility for any trading losses you might incur as a result of using this data.
READ  Scotland faces tough choices on future energy supply, says major report