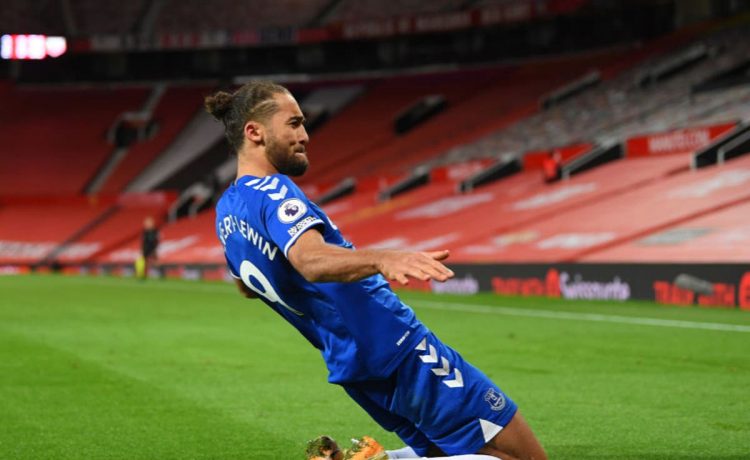 The story of Manchester United’s title challenge has been one of a team winning the hard way. Right up until the fifth minute of four-added on at Old Trafford, it appeared as though that would be the case once more. But throughout the second half, Ole Gunnar Solskjaer’s side had been determined to do everything in their power to throw all three points away.

And so, in the final passage of play, Dominic Calvert-Lewin broke loose of his marker on Lucas Digne’s free-kick, collected Michael Keane’s flick-on and poked the ball past David de Gea to secure an unlikely point for Everton and deny United the victory that had appeared all but certain at half time.

An Edinson Cavani header and a spectacular Bruno Fernandes strike had appeared to guarantee that United would end the day level on points with Manchester City at the top of the Premier League table ahead of the leaders’ trip to Anfield on Sunday, but familiar goalkeeping and defensive failures allowed Everton back into the contest.

Scott McTominay believed he had rendered preventable goals by Abdoulaye Doucouré and James Rodriguez irrelevant, restoring United’s lead with a set-piece header with 20 minutes remaining. Yet United are too brittle to keep winning by just one goal – as they regularly have over the past few months. It was always going to come back to bite them.

It is now, undoubtedly, advantage City. A victory at Anfield will open up a five-point gap at the summit with a game in hand. Whatever title aspirations United may have had are fading fast, but then no team that manages the late stages of a game as poorly as this could be considered contenders in the long run.

Strange as it may seem, the first half was actually one of the most accomplished United performances at Old Trafford this season. Once they found a rhythm, Solskjaer’s players had Everton pinned deep in their own territory and were cycling the ball back and forth in a persistent search for an opening. Even when it came, they did not stop.

Cavani makes a huge difference. His peerless movement inside the penalty area means that his team-mates have someone to look for whenever they are in possession. So it was for the first, with Rashford picking his head up out on the right flank and dropping a sublime, far post cross over Michael Keane’s head but onto the Uruguayan’s.

United kept coming, allowing next to nothing in behind their defence and constantly, patiently probing inside the final third. These spells of sustained pressure survived Pogba’s departure with an apparent thigh injury and resulted, finally, in the finest of the 30 goals that Fernandes has scored in a red shirt to date.

Comparisons were quickly drawn with Eric Cantona’s goal against Sunderland in December 1996 and his imperious turn and glower to all four corners of Old Trafford.

Fernandes celebrated in a similar fashion – turning to his team-mates rather than the empty stands for adulation – but the goal was somewhat different. After slowing the play down on the right-hand edge of the box and picking his spot like Cantona, he whipped rather than chipped the ball across Olsen and into the top left-hand corner.

It was a sublime strike, nevertheless, and spoke to a team totally in control of the contest. Yet that sense of control quickly slipped away at the start of the second half, and David de Gea was once again in the dock.

The only danger which Dominic Calvert-Lewin’s tame, aimless cross posed was if De Gea parried it directly into the path of Doucouré, who was rushing to support an Everton attack going nowhere fast. De Gea obliged, palming it directly to the midfielder for a simple tap-in. Three minutes later, Everton were level.

James had been quiet, as he has since been that flying start in the opening months of his Goodison Park career, but came to life with a low and hard finish into the bottom right-hand corner after Everton had peppered United’s penalty area. The defending was ponderous – not as poor as for Oliver Burke’s winning goal for Sheffield United recently, but not too dissimilar in the lack of urgency to close down their opponents either.

McTominay was one of several to blame – caught standing alongside centre-half Victor Lindelof rather than patrolling the edge of the area where James pounced – but he made amends by regaining the lead.

He did not appear to know much about it, but Luke Shaw’s delivery from dead balls has improved so much of late that he can find team-mates even when they’re not looking. Shaw’s free-kick hit McTominay on the back of the head and beat Olsen, who had dived far too early to prevent the ball from trickling over the goal-line.

That really should have been that, only it wasn’t. Late substitute Axel Tuanzebe – presumably brought on in part to waste time – conceded the free-kick to extend us past the allotted four minutes, which Digne curled into a crowded penalty area. The presence of goalkeeper Olsen was no excuse for United to lose Calvert-Lewin so easily, or for De Gea to move off his line slowly.

But it did not have to end like that. Not satisfied with throwing this game away once, United threw it away again and have handed their Etihad neighbours a clear advantage.