Dog left for dead after being run over finds forever home 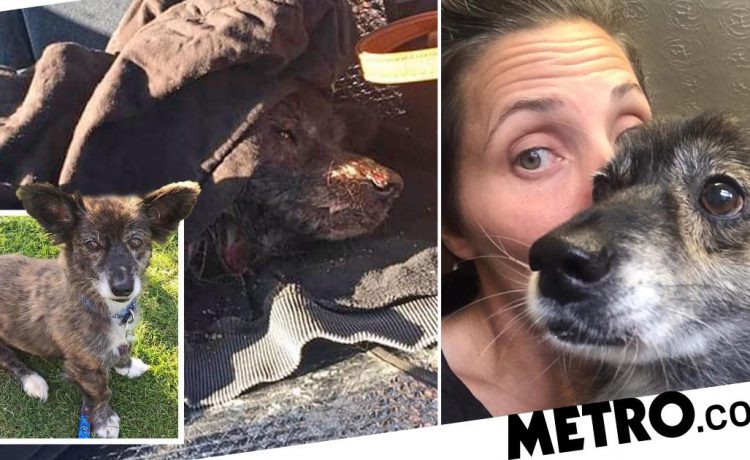 Boris the dog was run over and abandoned on the side of a road in Romania.

But thanks to Sally Keen, 40, he now has a happy home in Pershore, Worcs.

The 12-year-old pooch spent three months recovering after he was found and saved by UK-based charity Amicii Dog Rescue.

When Sally saw a picture of him covered in blood, she knew she wanted him to join her family.

The dog groomer said: ‘I have a soft spot for the dogs that nobody else wants.

‘So when I saw Boris, who was originally called Onyx, covered in blood whilst on the vets table – I wanted to help him.

‘I thought what a poor dog and didn’t think he would be able to survive.

‘He was pretty messed up and couldn’t even move.

‘I followed his journey online and he didn’t give up.

‘The odds were against him as he had broken his jaw and his spine had been damaged causing him to be unable to move his limbs.

When he was well enough in May, he spent two days travelling to his new home.

Sally decided to call him Boris after Britain’s prime minister.

She said: ‘When he arrived, he was pretty skinny and so shy.

‘He was wary of people with bald patches on his fur.

‘But now, he is like a completely different dog.

‘He is getting younger by the day.’

Sally was made a foster carer for Boris as he may need ongoing treatment due to his injuries.

The charity fundraised over £200 to pay for surgery to fill a hole in his mouth.

Sally said: ‘He has had two operations as he lost his front teeth which left a hole going up to his nasal cavity which wasn’t good because food could get stuck in his airways.

‘The vet worried in case they wouldn’t be able to fix it – thankfully they could otherwise it may have led to an infection.

‘He has some issues with his spine from being run over so the charity paid for physiotherapy in Romania before he came back.

‘He was very robotic when he arrived but now he runs – especially if he hears the biscuit tin, he is in there like a shot.’

Sally has helped multiple ‘end of life’ dogs and says it is very rewarding.

She said: ‘It is super sad having to say goodbye to dogs but it is good to know that I have helped them live their best life before dying.

‘My daughter Delilah, eight, finds it rewarding too.

‘She loves Boris and is happy that we are able to give him a second chance.’


MORE : Horse, dog and pony are best friends and look like siblings thanks to spotted coats


MORE : Battersea reveals the most popular cat and dog names of 2020