Dinosaurs survived in a 'land of fire' during the mass extinctions

Dinosaurs survived in a ‘land of fire’ during the mass extinctions and volcanic activity of the early Jurassic period 183 million years ago, tracks found in southern Africa reveal

Dinosaurs survived in a ‘land of fire’ during the mass extinctions and volcanic activity 183 million years ago, tracks found in southern Africa reveal.

Experts from the University of Cape Town studied fossil footprints left behind by the ancient creatures walking in what is now South Africa.

At the time the world was being rocked by a series of ‘mass extinction events’ including volcanic eruptions that were changing the air and oceans.

Despite this devastation, researchers found there were gaps where life recovered and animals crossed the super continent known as Gondwanna.

This was often with lava flowing around them and volcanoes still erupting all around them, leaving them to walk in a ‘land of fire’. 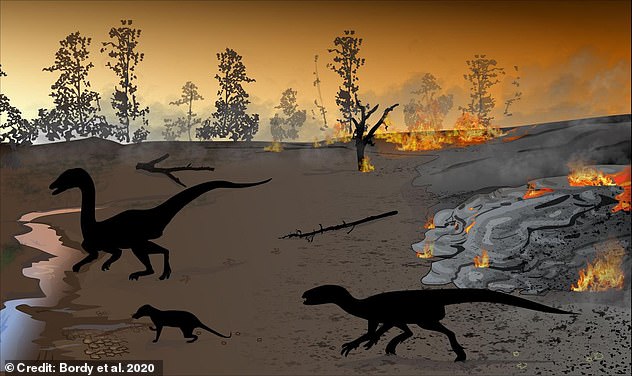 The fossil tracks were discovered on a farm in the centre of South Africa and were preserved in sandstones with a thick pile of basaltic lava flows.

Professor Emese Bordy from the University of Cape Town said they offered up a rare insight into ancient life in a ‘stressful, hospital environment’.

It was during the periods between massive volcanic activity that the movement of animals across the land surface could be captured as the fossil trackways.

The ancient footprints give scientists an insight into the type of Early Jurassic animal life that existed in these intermittent periods.

They also bring together different earth science disciplines that can help visualise what the ancient world looked like.

Different groups worked together to not just discover how ancient animals moved across the dangerous and volatile landscape, but also to reconstruct what the environment would have been like for the animals.

The fossil tracks tell a story from our deep past on how continental ecosystems could co-exist with truly giant volcanic events.

They can only be studied from the geological record, because they do not have modern equivalents, ‘although they can occur in the future of the Earth,’ said Bordy.

Geologists, volcanologists and palaeontologists worked with others to study the rocks, gather evidence on their properties and examine the ancient lava flows.

Professor Bordy said: ‘Our observations show that when vast sheets of lava flowed across the landscape, the environment turned into a land of fire.’

However, during the quieter periods life was able to return to normal with streams running, sun shining, plants growing and animals grazing and hunting.

‘What emerges is a picture not just of devastation wrought by volcanic eruptions, but one of a functioning ecosystem that endured despite environmental threats.’

They also discovered new species of dinosaurs in the footprints – one that was meat-eating and walked on two legs and another plant-eater on four legs. 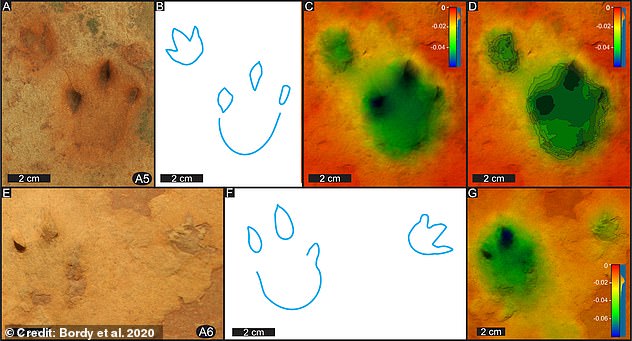 Some of the trackways studied by the researchers also appeared to be from synapsids, a group of reptiles thought to be the ancestors of mammals.

‘To identify the trackmakers, we carefully compared the morphology of the tracks – for example the shape, size and angles between the toe impressions – to other known tracks around the world’, said Bordy.

They compared their observations to previous reports and came up with a list of features that define the new ichnospecies they discovered.

‘Placed in their ancient environmental setting, these Early Jurassic trackways show that some animal life was resilient even as the environment changed and was hit by catastrophic events,’ said Bordy.

The research has been published in the journal PLOS ONE.

WHY DID THE DINOSAURS GO EXTINCT?

Dinosaurs ruled and dominated Earth around 66 million years ago, before they suddenly went extinct.

The Cretaceous-Tertiary extinction event is the name given to this mass extinction.

It was believed for many years that the changing climate destroyed the food chain of the huge reptiles.

In the 1980s, paleontologists discovered a layer of iridium.

This is an element that is rare on Earth but is found  in vast quantities in space.

When this was dated, it coincided precisely with when the dinosaurs disappeared from the fossil record.

A decade later, scientists uncovered the massive Chicxulub Crater at the tip of Mexico’s Yucatán Peninsula, which dates to the period in question.

Scientific consensus now says that these two factors are linked and they were both probably caused by an enormous asteroid crashing to Earth.

With the projected size and impact velocity, the collision would have caused an enormous shock-wave and likely triggered seismic activity.

The fallout would have created plumes of ash that likely covered all of the planet and made it impossible for dinosaurs to survive.

Other animals and plant species had a shorter time-span between generations which allowed them to survive.

There are several other theories as to what caused the demise of the famous animals.

One early theory was that small mammals ate dinosaur eggs and another proposes that toxic angiosperms (flowering plants) killed them off.

Ruth Langsford addresses QVC absence amid axe from This Morning: 'Hope you can hear me'