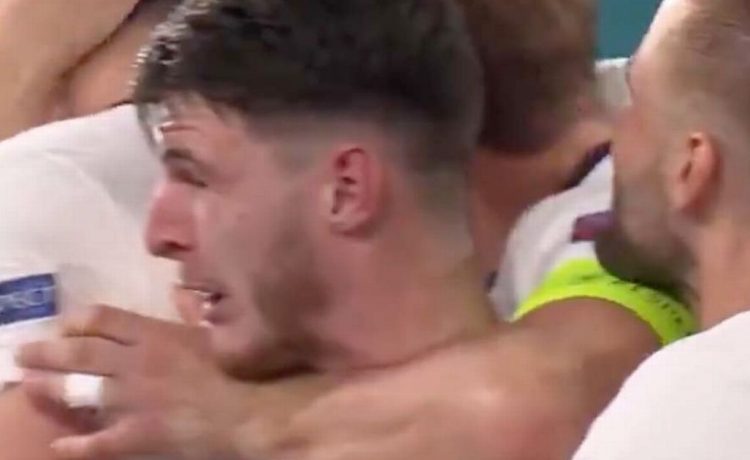 Declan Rice has posted an amusing message after footage emerged showing the England midfielder in a vice-like chokehold from Harry Kane.

Rice found himself in a headlock as the Three Lions celebrated the second goal in their 4-0 rout of Ukraine in the quarter-finals of Euro 2020 on Saturday night.

Harry Maguire doubled his side’s lead from a corner just one minute at half-time, and Rice was first on the scene to celebrate with the Manchester United captain.

Kane arrived soon after and accidentally wrapped his forearm across the West Ham star’s throat as he leapt onto his and Maguire’s backs.

Rice was in clear discomfort momentarily but Kane soon arrived back on the ground, releasing the presure around his neck.

A grin soon returned to the 22-year-old’s face, which only grew wider as Kane scored his second of the match four minutes later.

But the incident did not go unnoticed and BBC Sport shared a clip of Rice in the chokehold, making a reference to the WWE superstar of the same name by writing: “‘KANE WITH THE CHOKEHOLD!'”

In response, Rice quoted the tweet and joked: “Why always me?”

Kane did not appear to realise he had temporarily put his Premier League rival in a headlock, while the Tottenham striker’s attention after the match was largely focussed on keeping his side grounded.

“So to perform like we did was top drawer. Another clean sheet, four goals, it was the perfect night for us.

Should Declan Rice keep his spot in midfield for England’s semi-final clash versus Denmark? Comment below.

“That’s what we’re building on, we’re not getting carried away. We’ve got a great unit working from front to back, working hard for the team.

“It’s a vital part of winning games and winning tournaments. Of course, we’ve got a big semi-final coming up but we’re on the right path.

“We’ll work hard, recover well and then look forward to the semi-final.”

Kane did allow himself one moment to revel in his two-goal performance at Stadio Olimpico, which silenced any remaining critics after his slow start to the tournament.

He added: “Yeah, it’s always nice as a striker to score early in the game. It’s always a great feeling helping your team.

“There’s been a lot of talk around me and my performances but like I said I’m ready for the next game, help this team to go to a European final.”