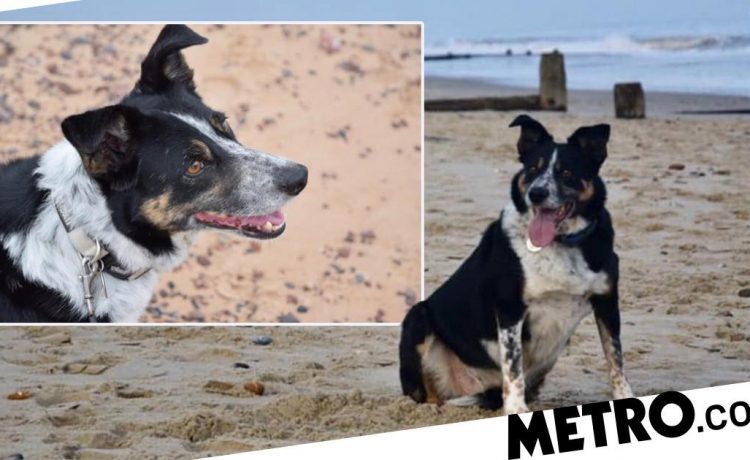 A sheepdog who was given up by her previous owners after losing her hearing is back at work after learning how to read hand signals.

Eight-year-old collie Peggy was let go as she could no longer follow her handler’s voice commands.

She was taken in by the RSPCA in 2018, and animal welfare manager Chloe Shorten whose husband Jason is a shepherd, initially fostered the dog.

This was just meant to be a stopgap, but the couple from Norfolk ‘completely fell in love with her almost immediately’ and decided she ‘wouldn’t be going anywhere’.

They both trained Peggy to follow hand signals, with Chloe describing her as living proof that you can ‘teach an old dog new tricks’.

‘She fitted in perfectly at our mad house, came everywhere with us and fitted in with my husband’s job,’ said Chloe.

‘We knew Peggy wanted to be working so we started the long process of teaching her how to herd and work with a shepherd without relying on voice commands. We started by teaching her to look at us for hand signals.

‘We used repetitive and positive reinforcement and instead of pairing a verbal command with an action we’d use a physical hand gesture.’

‘She reads our hand signals and body language as a way of telling what we’re asking for. For example, thumbs up means “good girl”.’

The couple were helped by a sheepdog trainer and Peggy practised alongside the couple’s two other working sheepdogs, Sid and Nora.

Chloe added: ‘While Peggy is generally retired, she goes out to work with my husband Jason from time to time and she absolutely loves it. She’s still learning new things and improving all the time.

‘The main thing for us was being able to tell her that she’s a good girl and reassure her she is going to be OK.

‘It took her a while to learn that we loved her and to gain her trust but it’s been so rewarding knowing that she now understands our praise.

‘Now she’s learned to demand fuss by tapping and nudging you on the arm or leg, sometimes she really hits you hard and you feel like you’ve been punched.


‘She absolutely loves running around like a nutter so we have a GPS tracker on her collar just in case we get separated and she couldn’t see us, as she can’t hear us calling her.

‘But it’s amazing to see her with this new lease of life and enjoying her life with us.

‘She’s proof that you can teach an old dog new tricks, and is a wonderful example of the capability of a dog, even if they do lose a sense.’

READ  A billion creatures have died, the climate is transformed. It is impossible to understand | First Dog on the Moon
Share on FacebookShare on TwitterShare on PinterestShare on Reddit
newsgrooveApril 10, 2021