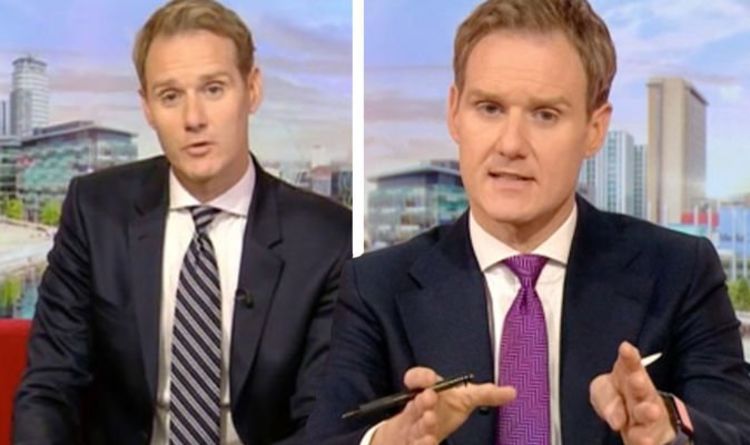 Dan Walker, 43, came under fire from a Twitter user after they branded his backing of a more defined definition of the term “stay local” during the UK’s third lockdown, “b****y obvious”. It comes after police have been handing out fines to walkers travelling outside of their supposed “local” area, which also saw Derbyshire police apologise to two female pedestrians and reverse their £200 fines.

As it stands, the rule reads: “Exercise with your household (or support bubble) or one other person, this should be limited to once per day, and you should not travel outside your local area.”

Taking to the social media site, Dan believed a little more explanation should be given to those who are unsure of how local they should be staying as Covid cases and deaths continue to rise daily.

“The definition to ‘local’ is important when police officers are saying they are ‘hung out to dry’ by a lack of clarity,” he said, following a plea from police for more transparency.

“Police Chief from West Yorkshire says ‘if it is desired that exercise is ‘local’ then clearly state what ‘local’ is’. Thanks for watching #BBCBreakfast.”

Fans rushed to the comments section to share their views, with many believing ‘local’ means walking to and from your home.

But some recognised that those who live in the countryside may have to travel miles to their nearest shop, so for them their local area is a lot larger than that of others.

READ  Who is Joey King? 9 facts every Kissing Booth fan should know

Someone else believed it was a choice people were making to travel further afield, and suggested they know they’re pushing their luck.

“So they know what a local walk is as well then!!!!! It’s not a Mastermind question. It’s b****y obvious to everyone. @mrdanwalker.”

He was accused of hypocrisy by a Labour MP, after it was claimed Mr Johnson was seen at the Olympic Park in east London on Sunday afternoon, with a witness telling PA news agency: “When I realised the person looked like Boris I cycled past them to hear his voice and be sure it’s him. It was definitely Boris.”

A Downing Street spokesman declined to comment on the matter when asked about it at a Westminster briefing.

Health Secretary Matt Hancock responded to questions about whether people should be allowed to exercise seven miles from their home, to which he replied: “Yes, you can go and exercise in the park with one other person, but only one other person.”

He also added: “It is OK to go for a walk with one other person around a park, but you should stay two metres apart from that other person.