Covid-19 US: Maskless spring breakers expected to cause cases to surge 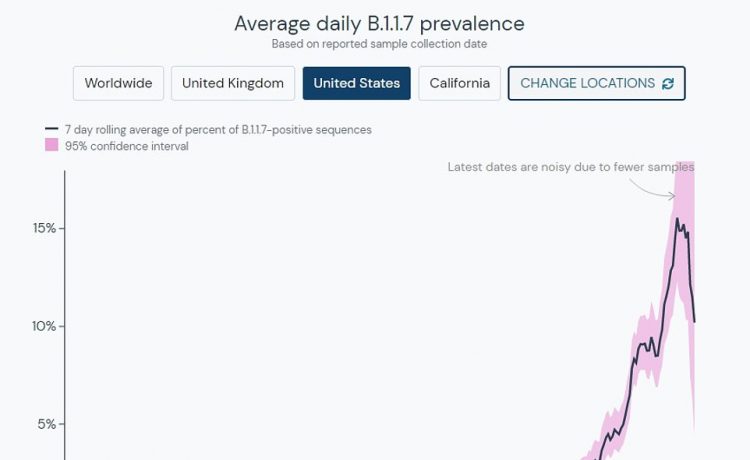 Maskless spring breakers are flocking to US beaches, more Americans flew in the last five days than in the five preceding Christmas, coronavirus may be set to surge again – and it all has US officials in an anxious bout of déjà vu.

Although Monday saw just 740 deaths, the seven-day rolling average of fatalities is back above 1,500 (at 1558), according to a DailyMail.com analysis of Johns Hopkins University data.

‘We have seen footage of people enjoying spring break festivities, maskless. This is all in the context of still 50,000 cases per day.’ Centers for Disease Control and Prevention (CDC) director Dr Rochelle Walensky said on Monday.

‘Cases climbed last spring, they climbed again in the summer, they will climb now if we stop taking precautions when we continue to get more and more people vaccinated.’

It’s also in the context of a dangerous coronavirus gaining ground in the US. The B117 variant first found in the UK is now in 48 US states, Washington, DC and Puerto Rico.

A study published last week suggested it is not only more infectious, but up to 55 percent deadlier. CDC officials predicted it would reach dominance in the US in March. About 30 percent of the most recent batches of virus samples tested (as of March 15) were positive for the variant. That’s up from nine percent of the samples sequenced on February 15.

It’s becoming more common quickly. Over the course of the entire pandemic, it has only been detected in six percent of all virus samples, but has risen to 30 percent this week and, in some places, prevalence of the variant is doubling every seven to 12 days.

Vaccinations are now keeping a steady pace, with 2.3 million doses being administered a day, but White House officials are so concerned that a post-spring break surge could overtake the speed of shot rollout that they are now making plans to send surge shipments to emerging hotspots, administration members told CNN anonymously on Tuesday. 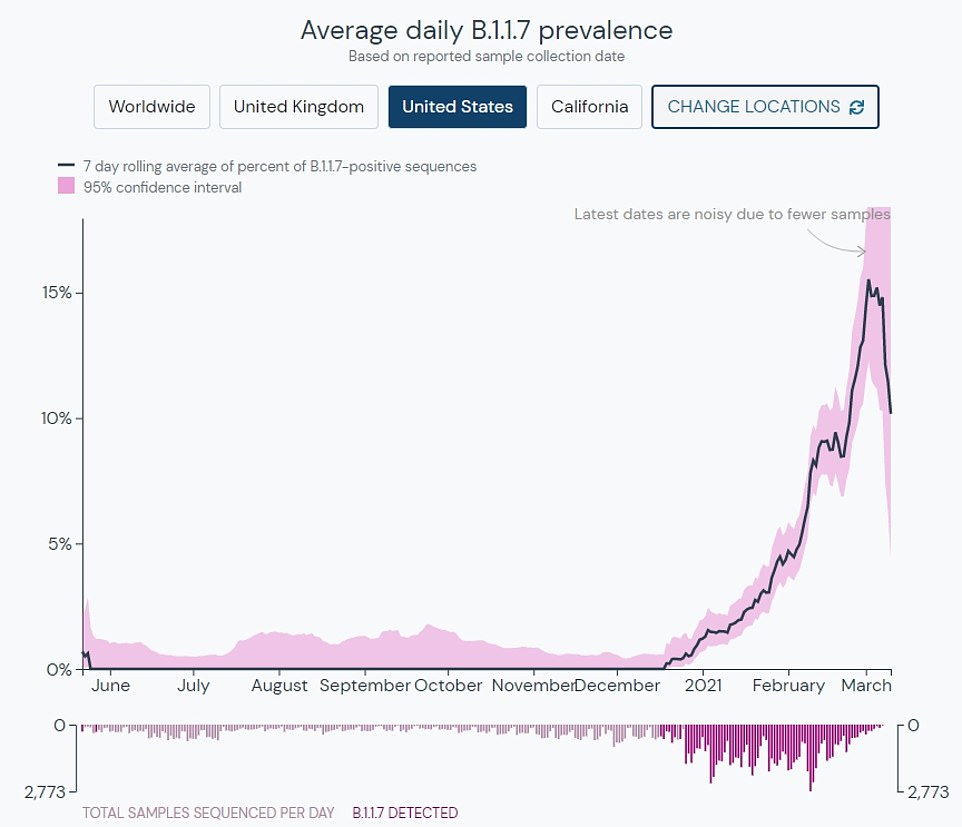 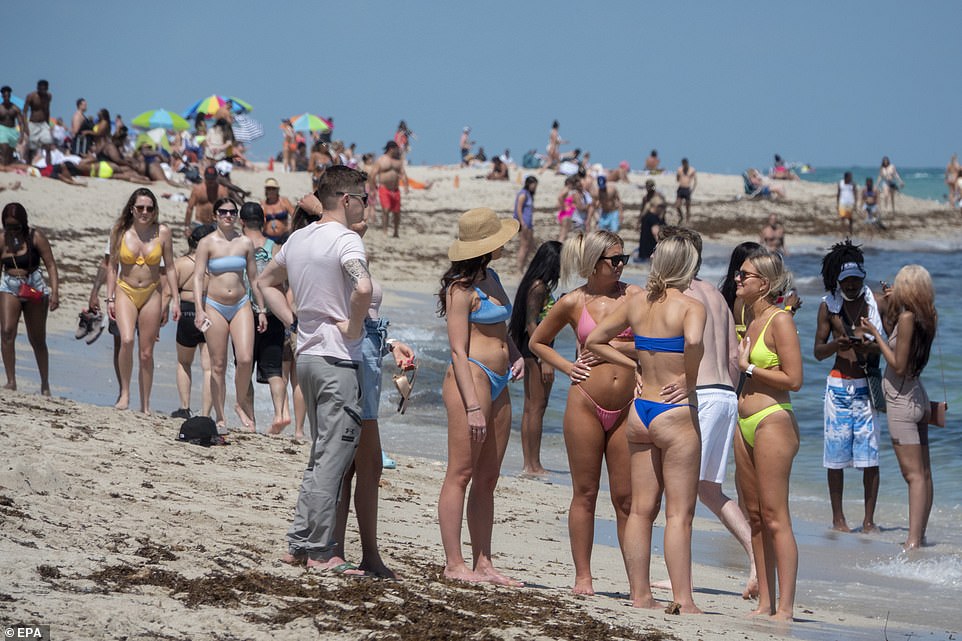 Maskless spring breakers crowded the waterfront in South Beach, Florida, where Governor Ron DeSantis has dropped fines for people who don’t wear masks or follow other restrictions. CDC Director Dr Rochelle Walensky warned that this fueled a surge in in cases last spring and will again this year, if people don’t follow precautions 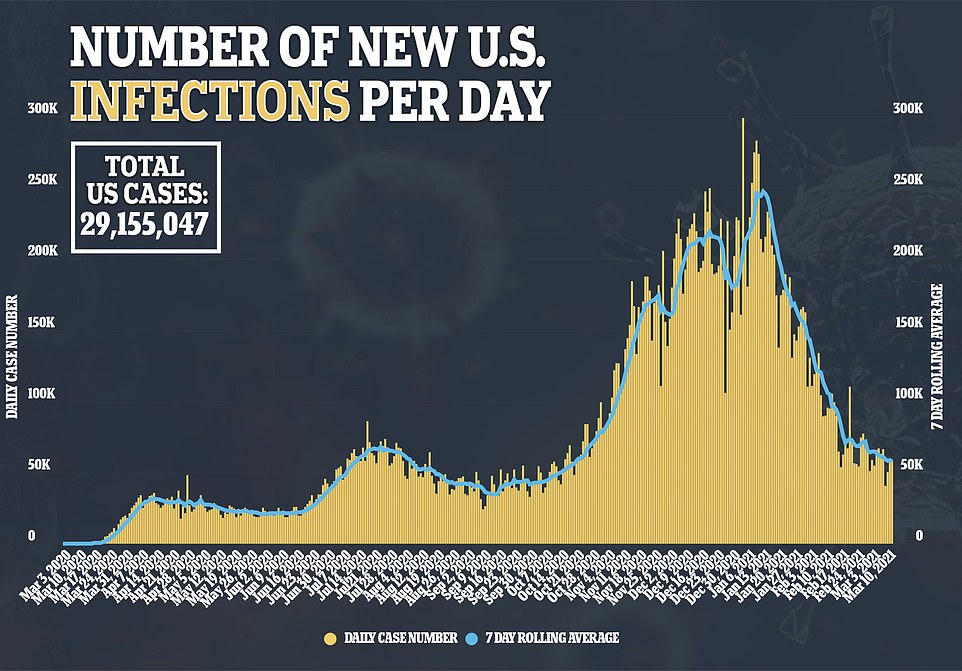 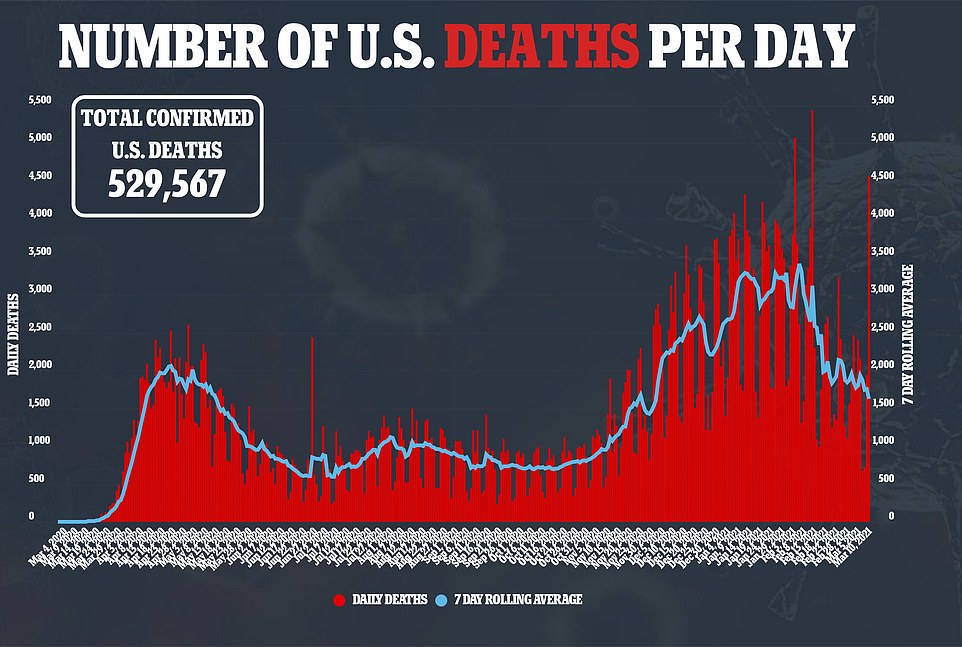 Although Monday saw just 740 deaths, the seven-day rolling average of fatalities is back above 1,500

‘Everything we do is with the thought in mind that there might be another surge,’ the official said.

In the vast majority of states, businesses are open and operating at 50 percent or greater capacity.

At least 14 states have dropped their mask mandates altogether, leaving it to individual businesses to decide if they will require patrons to cover their faces.

And Texas and Mississippi are leading the charge toward normalcy, with virtually no COVID-19 restrictions in place.

With St Patrick’s Day around the corner, even more states and cities are preparing for an influx of festive visitors – by dropping restrictions to help them celebrate and boost business.

Van Johnson, mayor of Savannah, Georgia, said Tuesday that his city is ‘wide open’ for the holiday, but claimed it would still be following guidelines to mitigate the spread of the virus.

‘It’s important to note that Savannah is wide open. We’ve been wide open. And the way we stay open is to require the use of mask,’ he said.

Following a year of Zoom school and lockdowns, spring breakers are eagerly taking advantage of the more relaxed rules. 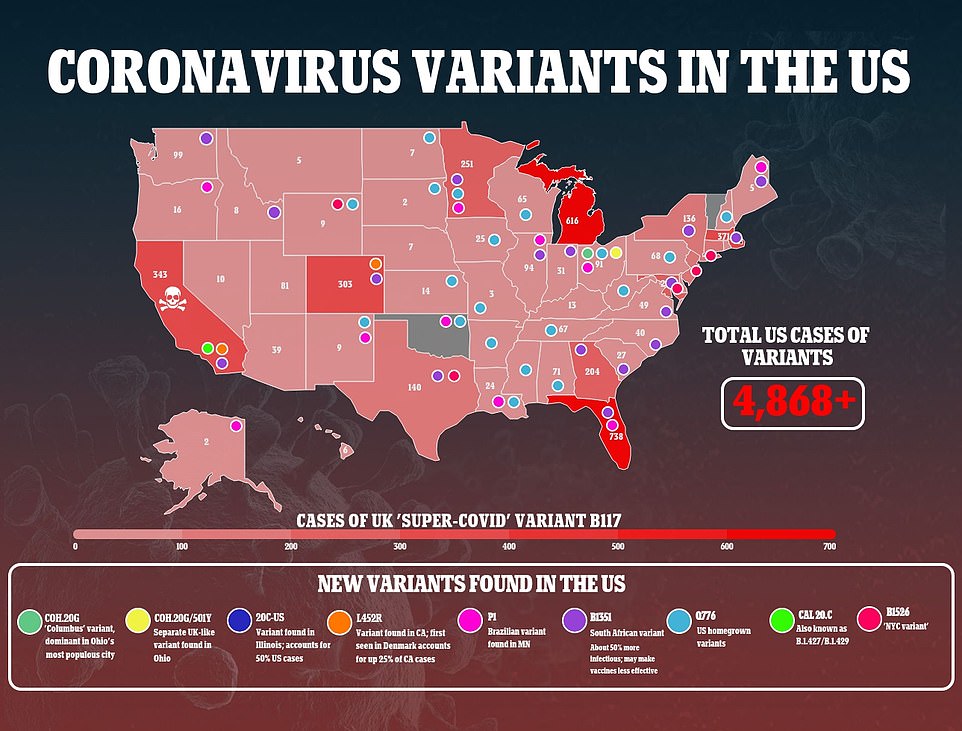 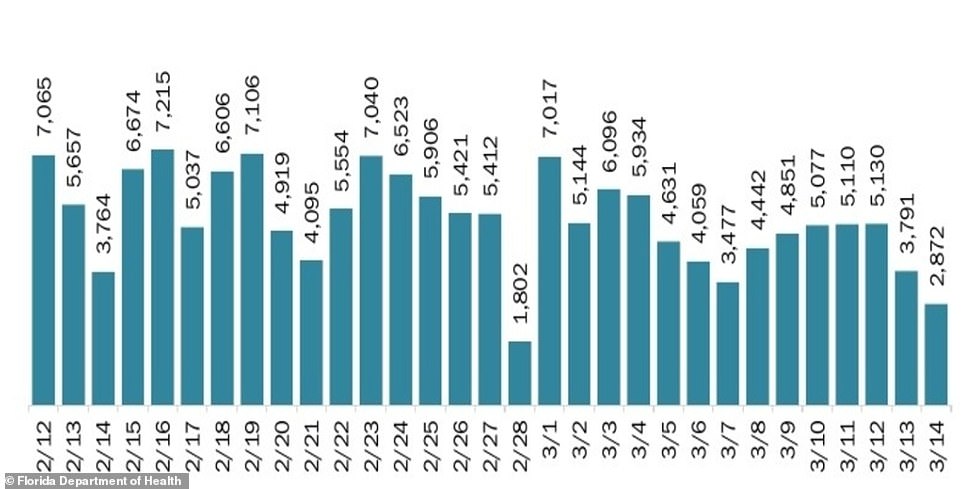 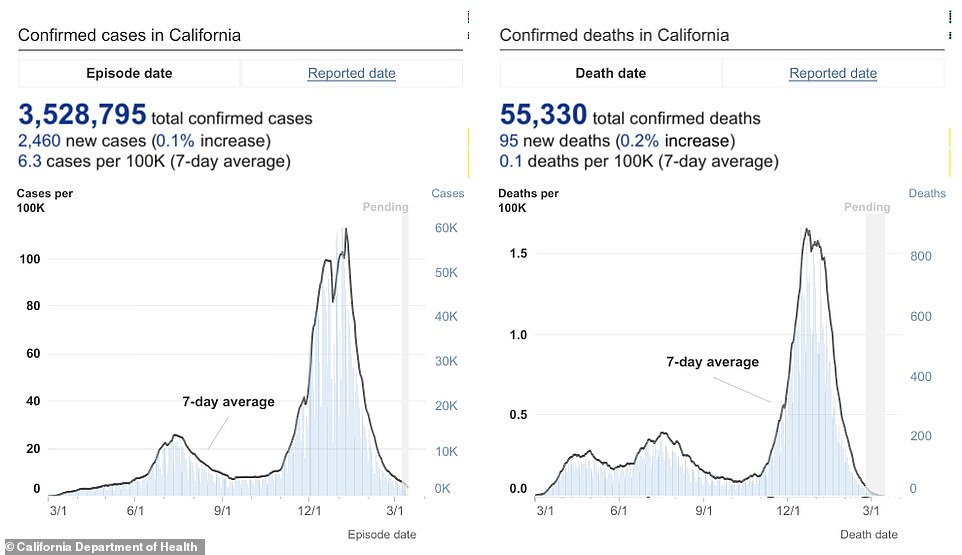 In California, where beaches usually draw spring vacationsers, there were 2,460 new cases on the March 14. The test positivity rate, however, is lower, at 1.9 percent

Over the past five days, 6.4 million people flew across the US, breaking the pandemic travel record of 5.6 million people who boarded airplanes in the five days leading up to Christmas, according to Travel Security Administration (TSA) data.

Popular warm destinations like Miami Beach saw influxes of college students and others.

In preparation for their arrival, Governor DeSantis dropped fines for people who flout COVID-19 safety measures.

It’s the latest push in his campaign to keep a tight grip on how cities and counties enforce – or rather don’t enforce – restrictions.

A group of South Florida counties inundated with visitors sent the governor a letter pleading with him to allow fines to be reinstated. 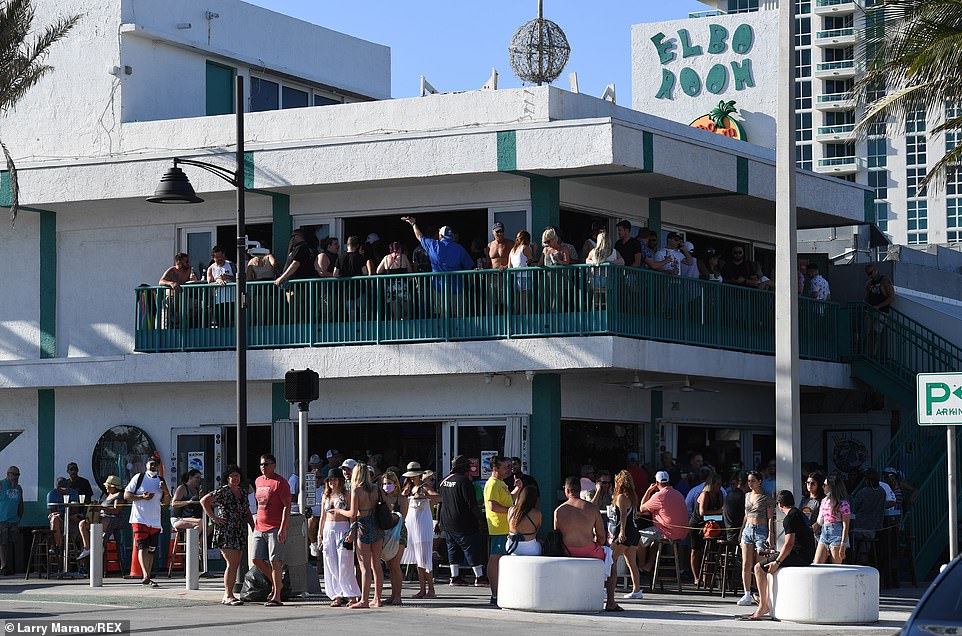 READ  How long can you keep leftover turkey in the fridge or freezer?

They argued that the move was emboldening people to ignore ‘common sense’ measures like wearing masks.

Meanwhile in California, where beaches usually draw spring vacationers, there were 2,460 new cases on the 14th. The test positivity rate, however, is lower, at 1.9 percent.

Yet the per capita death rates for the two states are similar. Florida has lost about 151 people per 100,000 residents to coronavirus. In California, 143 people per capita have died of COVID-19.

Scientists are still watching closely to see if the presence of variants will change things.

California has its own homegrown variants, one of which accounts for 25 percent of cases there and six percent nationwide, according to estimates from outbreak.io.

But Florida is the hotbed of the UK’s B117 variant.

With 738 confirmed cases of the variant, it has more than twice as many cases of B117 compared to the next hardest-hit state, California.

Experts have pointed to Florida as the one to watch for how the variant might affect the US as a whole.

So far, little has changed, there, but spring break could be the tipping point.

Nationwide, there are 46,690 confirmed cases of the UK variant, and if it fuels new outbreaks, the Biden administration is bracing to send special shipments of vaccines to those hotspots.

Until spring breakers are done partying, health officials will be holding their breath for the fallout. 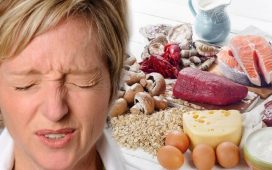