A rapid coronavirus testing machine could halve the time it takes to diagnose patients and help to free up space on wards, an NHS hospital has found.

Addenbrooke’s Hospital in Cambridge has been trialling portable machines called Samba II after being the first NHS hospital to receive them in April.

They can diagnose Covid-19 in less than 90 minutes, compared with the 24 to 48 hours it takes to receive a result from the Department of Health.

The average stay for patients on a Covid-19 holding ward, where results are awaited and other diseases are investigated, dropped from 59 hours to 30 hours when the rapid test was used.

The proportion of ‘isolation rooms’, which are typically used to keep potentially infected vulnerable patients separate, being used fell from 31 per cent to 21 per cent.

Researchers said this ‘could make all the difference’ in freeing up hospital capacity, especially if the coronavirus crisis persists into winter. 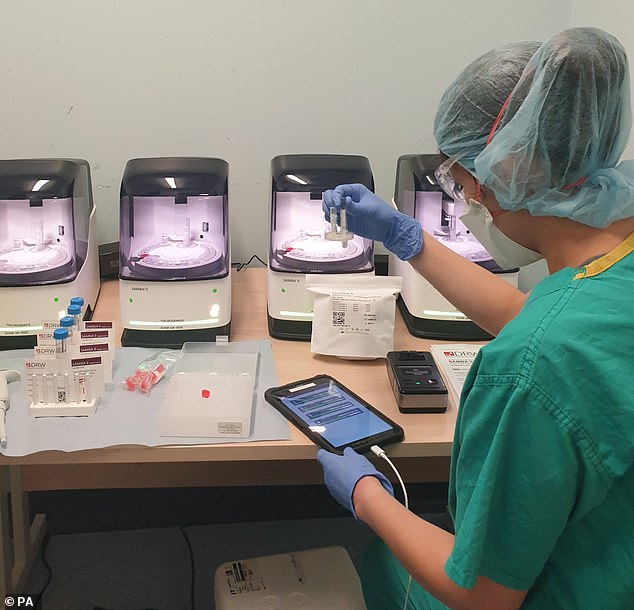 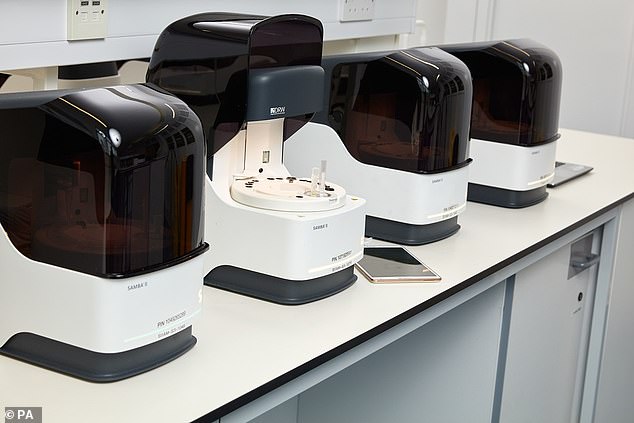 The machines can diagnose Covid-19 in less than 90 minutes compared with Public Health England’s 24-48 hours. Now, they have been found to cut patients’ time on wards by half

Ten of the Samba II devices, made by a company called Diagnostics for the Real World (DRW), were sent to the 1,000-bed Addenbrooke’s Hospital in April.

The machines have shown to be almost 99 per cent accurate at analysing swabs.

Health chiefs have never revealed the accuracy of PCR testing, currently used to diagnose patient across the UK, but up to 20 per cent of results are currently thought to be incorrect.

Once nasal and throat swabs have been collected from patients, the samples are loaded into the devices, which look for tiny traces of the virus in their DNA.

WHAT ARE THE DIFFERENT TYPES OF CORONAVIRUS TEST?

A PCR test (polymerase chain reaction) aims to pick up on active viruses currently in the bloodstream.

A PCR test works by a sample of someone’s genetic material – their RNA – being taken to lab and worked up in a full map of their DNA at the time of the test.

This DNA can then be scanned to find evidence of the virus’s DNA, which will be embroiled with the patient’s own if they are infected at the time.

The PCR test is extremely reliable but may be slow as it needs to be carried out by a qualified technician in a specialised laboratory. It does not look for evidence of past infection.

Antigens are parts of a virus that trigger the immune system’s response to fight the infection.

The key advantage of antigen tests is that antigens can be seen almost immediately after infection.

They work by running the patient’s swab sample through a machine designed specifically to spot them, often by introducing a chemical which reacts with the antigen to give off a signal visible to the technology.

Antigen tests are used to diagnose patients with flu, as well as malaria, strep A and HIV. They can also be done using swabs.

An antibody test is one which tests whether someone’s immune system is equipped to fight a specific disease or infection.

When someone gets infected with a virus their immune system must work out how to fight it off and produce substances called antibodies.

These are extremely specific and are usually only able to tackle one strain of one virus. They are produced in a way which makes them able to latch onto that specific virus and destroy it.

For example, if someone catches COVID-19, they will develop COVID-19 antibodies for their body to use to fight it off.

The body then stores versions of these antibodies in the immune system so that if it comes into contact with that same virus again it will be able to fight it off straight away and probably avoid someone feeling any symptoms at all.

To test for these antibodies, medics or scientists can take a fluid sample from someone – usually blood – and mix it with part of the virus to see if there is a reaction between the two.

If there is a reaction, it means someone has the antibodies and their body knows how to fight off the infection – they are immune. If there is no reaction it means they have not had it yet.

The machines amplify the DNA billions of times chemically so they can detect the virus with extreme sensitivity.

The machines are used at point-of-care, meaning they can be operated by healthcare workers within the hospital, as opposed to current tests which need to be sent off for analysis at a lab, where backlogs can result in delays of two days or more.

During this time, a patient who had arrived at hospital needing a test would have to stay on the coronavirus ward in isolation.

Addenbrooke’s Hospital switched nearly all of its coronavirus testing from standard lab tests to the Samba machines in May.

The machines are already used to diagnose HIV and hepatitis C, which are blood-borne viral diseases.

Researchers conducted their analysis by comparing data from electronic patient records of all those who had in-hospital tests done in the 10 days before and then after the switch to Samba machines at the hospital.

The average time it took to get a test result fell from 39.4 hours to 3.6 hours, according to the study, which is currently a pre-print and has not been reviewed by other scientists.

Patients who were tested using the Samba machine spent an average of 30 hours on the coronavirus ‘holding ward’ – where they wait for their results to either be discharged or have more tests done.

This was 28 hours shorter than usual because the wait for their test result was so much smaller.

The rapid diagnostics led to an increased availability of ‘isolation rooms’ needed for infected patients, as well as fewer hospital bay closures.

The researchers say that the time and hospital capacity spared by these devices will be ‘critical as we move towards autumn and winter’.

And if fewer hospital bays needed to be closed to make room for Covid-19 patients, more planned operations could take place.

A Samba test, costing approximately £30 per sample, would outweigh the cost of each additional bed day at around £200 ‘many times over’, the team said.

Professor Ravi Gupta of the Cambridge Institute of Therapeutic Immunology and Infectious Diseases, who is the study’s lead author, said: ‘The backlog of routine operations and screenings as a result of the pandemic is a huge issue, and must be resolved ahead of winter, when the NHS will face even more pressure from other infections like norovirus and influenza.

‘Rapidly testing admissions for SARS-CoV-2 at the point of care is essential for reducing Covid-19 transmission in hospitals, speeding up access to urgent care and allowing safe discharge to care homes.

‘It could make all the difference in a few months’ time.

‘Use of point-of-care testing would speed up the identification of patients for Covid-19 clinical trials, and receiving an experimental treatment a day earlier could make a clinical difference.

‘Hospitals across the UK, as well as care homes and prisons, could benefit from Samba II devices.’

The devices have been developed by a University of Cambridge spin-off company called Diagnostics for the Real World.

The creators say the tests have been validated by Public Health England and are expected to be launched in hospitals across the country.

A donation of US$3million (about £2.4million) from the businessman and philanthropist Sir Chris Hohn means 100 machines have been purchased.

An initial study, with 149 participants, indicated that 96.9 per cent of people with the virus were correctly identified as positive cases.

It had 99.1 per cent specificity (the ability to correctly identify negative cases).

Previously tests in 102 patient samples showed the machine could spot the disease 98.7 per cent of the time.