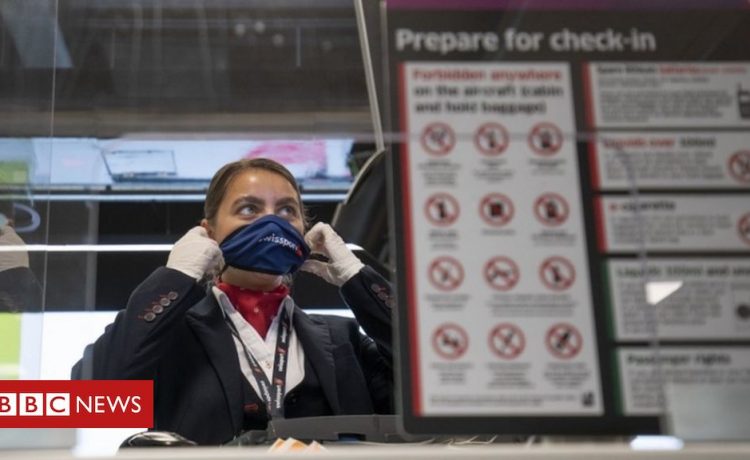 The UK government’s decision-making on air bridges has been “shambolic”, Scotland’s first minister has claimed.

Nicola Sturgeon criticised the speed at which Westminster expected Scottish ministers to make a decision on lifting quarantine on overseas visitors.

But she said the Scottish government was “very likely” to agree to relaxing restrictions for people arriving in Scotland from “low risk” countries.

She said it needed to carefully scrutinise “medium risk” countries.

Under the UK government’s plan, from 10 July people arriving in England from 50 countries including Spain, Italy and France will no longer have to isolate for 14 days.

Scotland, Northern Ireland and Wales have not yet agreed to the proposals.

Downing Street has said devolved governments should “make and explain their own decisions” on requirements for people to quarantine when returning from abroad.

Meanwhile, the boss of two of Scotland’s leading airports has warned that failure to adopt a four nations approach will put further jobs at risk.

And the Scottish Chambers of Commerce called on the Scottish government to “align with a UK-wide approach as a matter of urgency” to help protect jobs and the economy.

The business organisation added: “Politics must be put to one side by all in order to give Scottish businesses the ability to drive up demand and do what they do best, making Scotland the best place to invest and do business.”

At her daily coronavirus briefing, Ms Sturgeon said the Scottish government had to make “difficult and complex” decisions on the issue – but the UK government’s position kept changing.

The list of countries that Westminster asked Scotland to sign up to on Thursday was different to that announced on Friday, she added.

“When so much is at stake as it is right now we can’t allow ourselves to be dragged along in the wake of, to be quite frank about it, another government’s shambolic decision process,” she said.

“We want to welcome visitors again from around the world and we also want to allow our own citizens to travel.

“We also want, if possible for obvious practical reasons, to have alignment on these matters with the rest of the UK.”

She said she hoped a decision could be made “quickly”.

The Scottish government has assessed the prevalence of coronavirus in Scotland as five times lower than it is in England, the first minister added.

Asked about Nicola Sturgeon’s criticism of the UK government, the prime minister’s spokesman said that “the changes we’re making now are cautious and will allow people to travel to an exempt country without the need to self isolate on their return.”

“It is for devolved administrations to make and explain their own decisions around the measures that they are putting in place,” he said.

“We have been working with all devolved administrations on quarantine from the outset and we continue to do so,” he said.

Earlier, Scottish Justice Secretary Humza Yousaf said he had been given 30 minutes to look at a list of countries under consideration for “air bridges” before being asked to make a decision on Wednesday night.

UK Transport Minister Grant Shapps said there was still time for the devolved nations to join the plans.

“Remember this isn’t changing until the 10 July so there’s still an opportunity for them to do that and they may well,” he said. “I wouldn’t be surprised if we see countries come on board.

“I very much hope we can do this as four nations at the same time I think that would very much simplify it for people but they will need to make that decision themselves.”

He added: “Having a piecemeal approach will compound the devastating impact the blanket quarantine measures have had on our aviation, tourism and hospitality sectors.

“People are rightly concerned for their health, however, they’re also fearful for their jobs.

“This isn’t just about people being able to go on a summer holiday, it’s about safely re-establishing the routes that drive trade and investment.”