Australia’s benchmark stock index has suffered its worst single-day drop in history as the country braces for an expected surge in coronavirus cases.

The wider All Ordinaries index suffered its steepest decline since the Black Monday crash in 1987, falling 9.5 per cent in a day, despite reports Scott Morrison is considering a second round of economic stimulus.

The prime minister met senior cabinet officials on Monday to discuss a potential “scaling-up” of plans to inject A$17.6bn (£14.2bn) into the economy.

Australia has recorded nearly 299 cases of coronavirus, five of them fatal, and is expecting patient numbers to increase rapidly in the coming weeks.

Travel and entertainment stocks were among the hardest hit on Monday, after the government banned social gatherings of more than 500 people and ordered anyone arriving into the country to self-isolate for 14 days.

Japanese markets were flat after swinging wildly in response to the Bank of Japan announcing emergency monetary policy measures, including one-year zero per cent loans.

There were were no glimmers of optimism in Europe, where Paris tumbled 9 per cent shortly opening on Monday, London sank 7 per cent and Frankfurt gave up 7.5 per cent.

The FTSE 100 dropped below 5,000 points to its lowest level in eight years in early trading.

On Wall Street, futures for the benchmark S&P 500 index fell 5 per cent on Sunday night and triggered a halt in trading after the US Federal Reserve slashed its key interest rate to shore up economic growth.

The Federal Reserve said the rate would stay between zero and 0.25 per cent until it is confident the economy can survive a near-shutdown of activity in the US, where New York and Los Angeles are the latest major cities to order bars, restaurants, theatres and cinemas to close.

Vishnu Varathan, an economist at Mizuho Bank, said “despite whipping out the big guns” the Federal Reserve’s interest rate cut was ”falling short of being the decisive backstop for markets”.

“Markets might have perceived the Fed’s response as panic, feeding into its own fears,” he added.

Goldman Sachs warned the S&P 500 could fall a further 26 per cent on its current level as the economic impact of the Covid-19 pandemic continues to bite.

“The coronavirus has created unprecedented financial and societal disruption,” the bank’s US chief equity strategist, David Kostin, wrote in a note to clients. 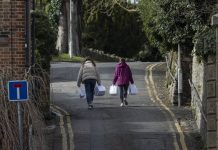 Taking care of our family business is the priority now 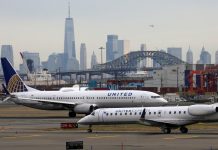 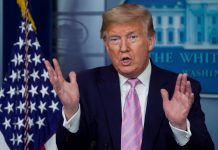