Coco Gauff signalled the changing of the guard in women’s tennis after Serena Williams crashed out of the Australian Open and Caroline Wozniacki retired.

On a crazy day of upsets and tears Down Under, the 15-year-old “arrived” as a genuine Grand Slam contender by crushing defending champion Naomi Osaka.

But Williams has only seven Grand Slams left to play before she turns 40 – and will now be competing against teenage sensation Gauff for all the big titles. The youngest ever qualifier at SW19 last summer is back into the fourth round in her third Major – and now among the favourites for the title.

ESPN’s Chris Evert said: “At Wimbledon we talked about the Cinderella story and a star is born. She has arrived, she is here and she has a good chance to win this title.

“It is ironic that it happened on the same day because not only Serena but Venus and Caroline have really carried the torch for women’s tennis for a good 15-20 years. We need this shot in the arm.”

“Oh my gosh, I don’t know where that came from,” she said. “From the crowd, I guess. Honestly, what is my life? Two years ago, I lost in the first round in Juniors. Now I am here. This is crazy.”

The 22-year-old Osaka, who beat Gauff at the US Open, said: “You don’t want to lose to a 15-year-old. I think it’s because I have an age problem. I don’t like losing to people that are younger than me.”

Williams, 38, lost before the fourth round in a hardcourt Major for the first time since 2006 as she went down 6-4 6-7 7-5. She had also thrashed her opponent in New York – losing only one game in 44 minutes – but made 56 unforced errors in Melbourne.

“I just made far too many errors to be a professional athlete today,” said the world No.9. “I can’t play like that. That’s unprofessional. It’s not cool. I’m definitely going to be training tomorrow to make sure I don’t do this again.”

Williams won her 23rd Grand Slam while eight weeks pregnant here in 2017 but has since lost four finals in the last two years at Wimbledon and the US Open.

“I definitely do believe I can win 24 or I wouldn’t be on tour,” she stated. “I don’t play just to have fun. I seem to do well the last two Slams of the year. I have won them all several times. Each one is definitely an opportunity for me to go out there and win. And I am not thinking about not being here next year.”

Fighting back the tears, the Dane joked: “It’s fitting I finished my career with a three-setter, a grinder and on a forehand error.” 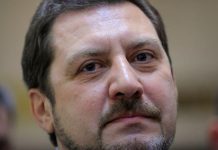 Why everyone’s talking about Sun Yang

Russians to skip World Cup event in U.S. because of coronavirus

Aymeric Laporte: Defender expected to be out for 'up to a month' with hamstring injury