Cobra Kai: YouTube releases season 1 for free, will do same for season 2 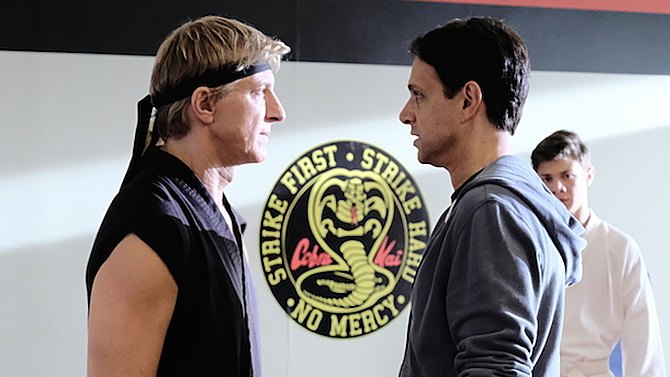 Cobra Kai is kicking through its YouTube Premium paywall, making an experimental transition to free viewing!

The entirety of Cobra Kai’s first season, which arrived back in 2018, is being released for the first time outside the subscription auspices of YouTube Premium, with the caveat of the episodes being presented in ad-supported form. Moreover, along with some other YouTube Premium content, the show’s second season – still relatively fresh from its April 24 premiere – will also be made available in free-but-ad-filled form on September 11. However, as mentioned, this is an experimental transition, and, consequently, the free availability will be limited – at least, for now, anyway.

As YouTube chief business officer Robert Kyncl says of the ad-supported experiment in a statement.

“Today, we are welcoming a global audience to enjoy our award-winning series and specials. We see a tremendous opportunity to develop more region-specific content, particularly in Europe, Asia and Latin America, and will continue to partner with the biggest stars and creators in the world to share their stories and voices.”

The move represents a dipping of YouTube toes into the waters of dual-distribution, which – should the strategy prove successful – normalise the notion of YouTube Premium making its original content watchable for free with commercials, all while still pushing the premium subscription perks, which notably yields ad-free viewing of said content, as well as exclusive director’s cut versions.

YouTube Premium’s non-Cobra Kai lineup of originals includes shows like Impulse (a follow-up to the sci-fi mythology of author Steven Gould, known from the 2008 film, Jumper), Origin, which stars Harry Potter’s Tom Felton and Game Of Thrones’ Natalia Tena, as well as time-travel series Lifeline. However, most of its scripted fare has already been cancelled, with only Impulse set for a season 2 return. Indeed, YouTube has already shifted the focus of its premium platform to more (cost-effective) reality show and documentary content; a move possibly designed for the uncertainty of its upcoming business model shift.

READ  Who are the judges in The Voice Kids?

It will certainly be interesting to see what the YouTube Premium landscape will be like by the time Cobra Kai season 3 rolls around, which will presumably (based on the release of previous seasons,) occur sometime within the window of spring 2020.