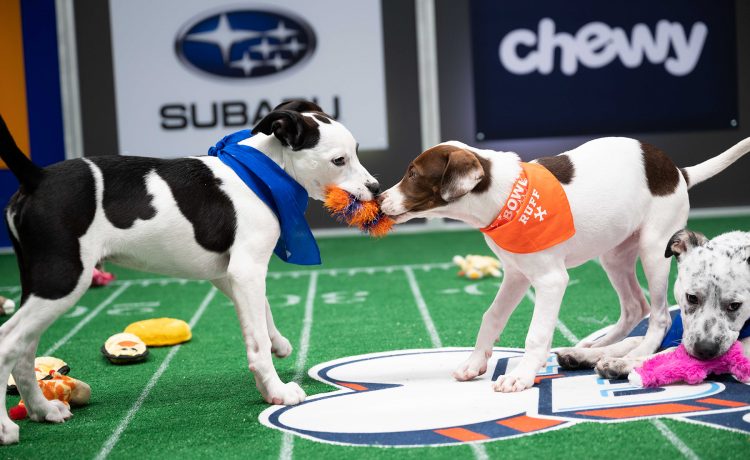 America’s greatest and most important sporting competition, the Puppy Bowl, will return this year, February 7th at 2 p.m. ET on Animal Planet and streaming via Discovery+.

The annual Super Bowl counter-programming classic will feature 70 adoptable puppies from 22 shelters and rescues from around the Northeast United States. The competitors will be split into two teams, Team Ruff and Team Fluff, with the latter hoping to defend their 2020 Puppy Bowl title.

A handful of kittens will also take the field during the Kitty Half-Time Show, and for the first time, the Puppy Bowl will boast additional dog cheerleaders. All animals involved are up for adoption; the Puppy Bowl has an impressive 100% adoption rate for each of its past 16 installments.

Puppy Bowl XVII will feature ESPN’s Monday Night Football play-by-play announcer Steve Levy and SportsCenter host Sage Steele providing commentary and analysis throughout the game, while veteran “Rufferee” Dan Schachner will return for his 10th Puppy Bowl. To highlight the dogs and shelters involved, the Puppy Bowl will include an array of “Pup Close and Personal” segments that will feature appearances from Kristen Bell, Valerie Bertinelli, Duff Goldman, and the pop group Boys World.

Prior to the main event, there will be a pre-game show starting at 1 p.m. ET. Per a release, it will feature correspondents “Rodt Weiler, James Hound, and Sheena Inu, and field reports Brittany Spaniel and Herman Shepard pump up the crowd with pup insights on the furry matchups before the big game.”