US health officials have narrowed their warning against vaping to focus on THC e-cigarettes purchased on the street or handed off from friends and family, and ceased to warn against vaping nicotine for adults.

Centers for Disease Control and Prevention (CDC) research, published in the New England Journal of Medicine,  has confirmed that 82 percent of lung illness occurred in patients who used THC products.

Only 14 percent used only nicotine e-cigarettes.

Now, the CDC is cleaving the often-linked epidemics of youth vaping and of the lung disease they call EVALI.

Although new cases are still being reported, the CDC says that the increases are slowing down and officials are no longer advising that adults who are former or current smothers to avoid e-cigarettes, though they continue to stress that vaping is not safe for teenagers and children. 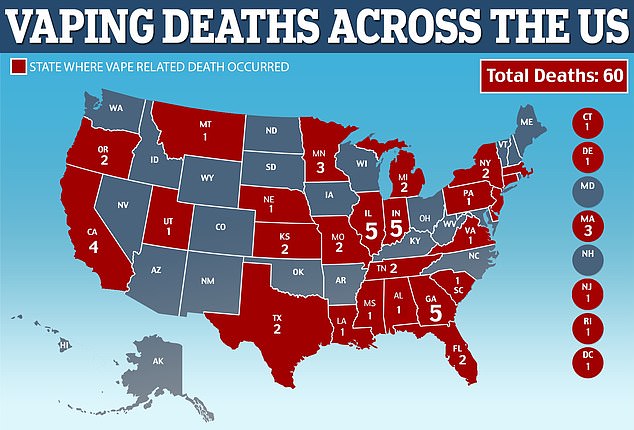 The CDC announced on Thursday that 2,668 people have fallen ill in every US state and 60 people have died in 27 states (red) and DC due to mysterious lung illnesses linked to vaping. But, Friday, officials dropped their warning against e-cig use for adult smokers

‘It is also critically important that we continue to do all we can do to protect Americans – particularly young people – from this serious health threat,’ warned Dr Robert Redfield, director of the CDC.

One of the three reports published in the NEJM on Friday stressed that the lung illnesses continue to be ‘strongly-linked’ to vitamin E acetate, an oily derivative of the vitamin used to dilute some e-liquids, usually those used in THC products.

Nicotine is water soluble, and thus doesn’t require oil to create the liquid hated in vaping it.

Vitamin E acetate is very ‘sticky’ and officials think it catches in the lungs air sacs and triggers inflammation seen in EVALI patients.

READ  'We see with the brain': creating a comic book for blind people

Demographically, they stood out significantly from the other lung illness victims.

Researchers conducted interviews with 121 such patients and concluded that, despite the large proportion of illnesses that connected to vitamin E acetate in THC vapes, they couldn’t wholly rule out nicotine e-cigarettes as a possible trigger for EVALI.

The final paper, a commentary piece, made the distinction that vitamin E acetate in THC vapes sold primarily on the black market is the driver behind the illnesses, while sweet flavors and clever ad campaigns for cartridge-based e-cigarettes like Juul are behind the epidemic of youth vaping.

Officials still urge Americans to avoid any bootleg vapes or those from ‘informal sources’ like street dealers, friends and family, and plead that no one add vitamin E acetate to e-cigs.

They also recommend that young people sill stay away from all e-cigs, and adults to avoid those with THC in them.

But,’Adults using nicotine-containing e-cigarette or vaping products as an alternative to cigarettes should not go back to smoking; they should weigh all available information and consider using FDA-approved smoking cessation medications,’ the CDC said in a press release.

Sixty people have died in the outbreak of vaping-linked lung illnesses, the Centers for Disease Control and Prevention (CDC) announced Thursday.

Deaths have been reported in 27 states, but no new states have been added to the list of locations with fatalities.

Officials note that they are still investigating additional deaths, so the toll will likely continue to climb.

The number of illnesses also continues to swell, but in the last week, only 66 additional cases were reported, suggesting an encouraging slow-down in additional diagnoses.

READ  How to get rid of visceral fat: Best exercise to beat the harmful belly fat

Meanwhile, New Jersey lawmakers have passed a bill to ban flavored e-cigarettes, which Governor Phil Murphy has until January 21 to sign and teenagers and their parents have taken to TikTok to post videos of themselves destroying e-cigarettes.

As of Thursday, 2,668 people have been hospitalized with lung illnesses linked to e-cigarettes in every US state, the District of Columbia, Puerto Rico and the US Virgin Islands, according to the Centers for Disease Control and Prevention (CDC).

Most of the victims are male and under the age of 35, with ages of those who died ranging from 15 to 75.

However, last week, Texas officials reported the death of a 15-year-old there. If the death is verified by the CDC, that will be the youngest victim of what health experts have dubbed EVALI to-date.

The 60 deaths have been confirmed in 27 states and DC, with Georgia, Illinois and Indiana having the highest number of vaping deaths at five each, as of last week’s update, though the new numbers don’t specify specific death tolls per state.

According to the CDC, about 83 percent of people who’ve fallen ill reported vaping THC, the main psychoactive component in marijuana.

By comparison, a mere 13 percent have reported exclusive use of nicotine-containing products.

CDC officials say there are ‘confident’ that vitamin E acetate, a diluting agent used in many THC vaping products, is behind the illnesses.

READ  Is breast milk the next superfood? Companies are racing to produce formula for ADULTS

It was detected in 48 of 51 samples of tissues of patients with – what is being called – EVALI (e-cigarette or vaping product use-associated lung illness).

‘It is clear that the outbreak represents a new phenomenon and not a recognition of a common syndrome that had evaded our attention.’

While vitamin E is safe as a vitamin pill or to use on the skin, inhaling oily droplets of it can be harmful.

It’s sticky and stays in the lungs, so much so that Dr James Pirkle of the CDC likened it to honey.

Scientists theorized that the oil might be coating the lungs, triggering inflammation and damage.

In fact, it causes burns that have been likened to those suffered by soldiers attacked with mustard gas during World War I.

Last week, the US Food and Drug Administration’s announced a ban on most flavored e-cigarettes in an effort to curb the rise of youth vaping.

Only two flavors, menthol and tobacco, are being sold in stores.

The CDC has not changed its warning against using these illegitimate products and continues to urge Americans who don’t use e-cigarettes not to start.

Although the agency says that smokers who have switched to vaping should not return to using combustible cigarettes, the CDC also advises vaping products should ‘never be used by youths, young adults or women who are pregnant.’ 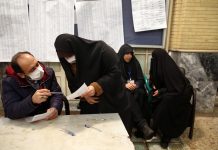