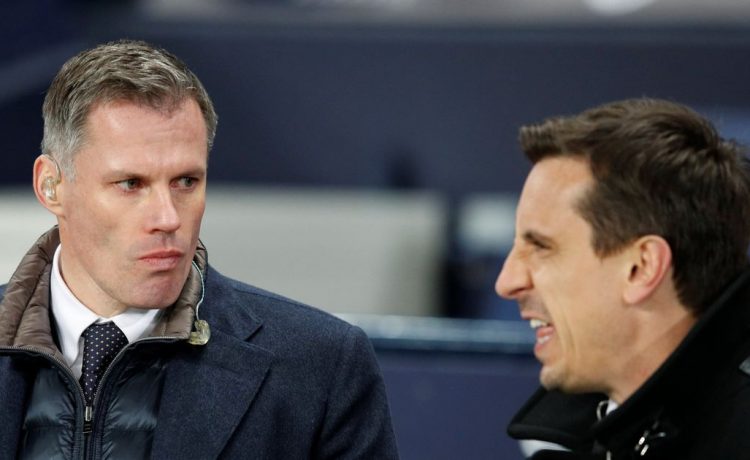 Gary Neville and Jamie Carragher have been involved in a heated debate over whether Trent Alexander-Arnold should be included in the England squad for the European Championships this summer.

The Liverpool right-back was left out of the most recent Three Lions squad by manager Gareth Southgate, missing the World Cup qualifying wins over San Marino, Albania and Poland.

Alexander-Arnold’s omission has been questioned by many and raised doubts over the likelihood of his participation at the Euros.

Debating the issue on Sky Sports’ Monday Night Football , Neville, who also played right back for England, sought to explain why the 22-year-old could miss out.

“Who’s he going to be playing against? Hazard, MBappe, Sane, Jota, Ronaldo. Who do they want to play against? [Reece] James, [Kyle] Walker or Trent? They’ll say, I’ll let Trent go forward, he’ll leave space behind.”

Unconvinced by the explanation, Carragher fired back: “You’re making the case for him not going, would you not take him?”

Neville responded that he would but Carragher challenged him on this after his previous point.

“Hang on, you’ve just made the biggest case for why he wouldn’t go and why Gareth Southgate is not picking him.

“I’m asking you, not Gareth Southgate, what would you do?”

To which Neville responded: “I’ve been asked a different question, give me a break.

“I think the reason he won’t take him is because he’s there to win a tournament and I think he’ll trust Walker, or Trippier in a back three or wing back. Maybe James because he has more power to handle an MBappe or a Ronaldo, and I don’t think he will take him.”

Carragher, clearly unimpressed by his fellow pundit, again called out Neville over his comments.

“If you have picked Kieran Trippier over Trent Alexander-Arnold that is embarrassing.” he sneered.