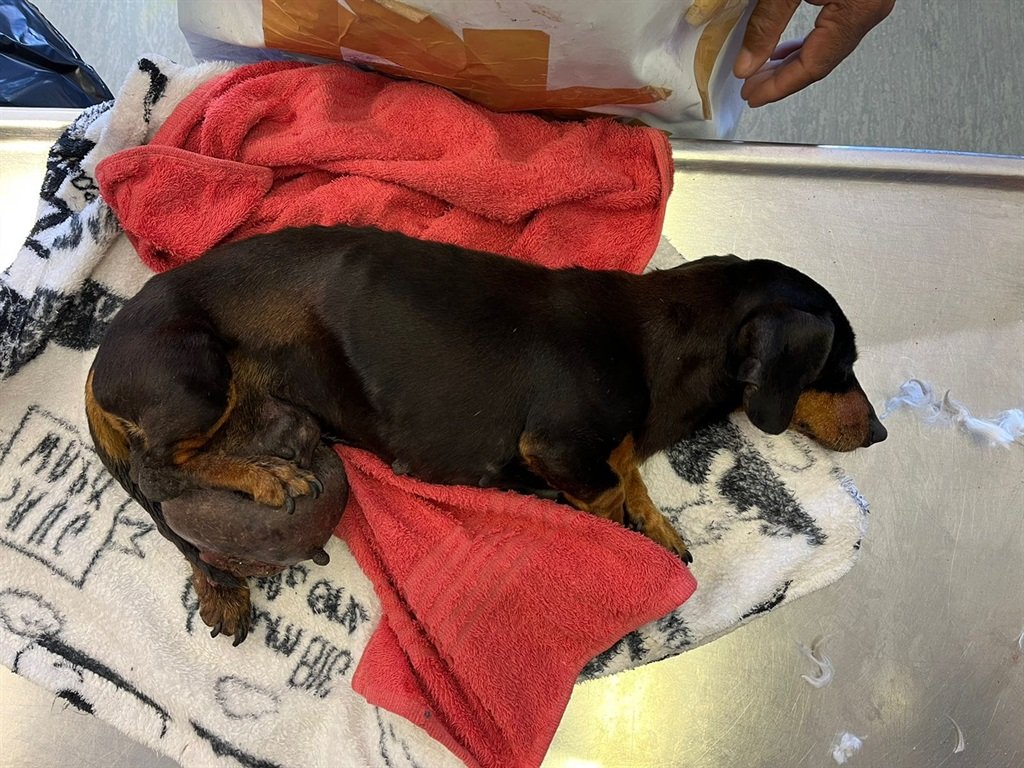 Lizzy had developed a tumour weighing more than 5kg.

The Animal Welfare Society of South Africa (AWS) will file charges of animal cruelty against a Mitchells Plain pet owner after being forced to euthanise a 6-year-old Dachshund with a “smelly” mammary tumour.

AWS spokesperson Allan Perrins said by the time severely neglected Lizzy, the dog, was brought in last weekend, with a large tumour hanging from its abdomen, they could do nothing to help the animal.

“The tumour had grown as big as the dog. Lizzy’s smell, which stemmed largely from the massive 5kg tumour, was so intense that we had to evacuate the hospital room immediately. It was not a pretty sight to see,” Perrins added.

According to AWS, after consultation the dog owner agreed to surrender Lizzy to the organisation.

We had no choice but to put the patient down immediately. Not only was she suffering, but she also wasn’t able to walk as the tumour was hanging onto the floor. What we do know is that this tumour must have been coming on for months as we could see that Lizzy was undernourished and neglected by her owner.

According to AWS, there is no excuse for depriving one’s pet of veterinary care, yet many pet owners knowingly let them suffer in silence.

The organisation said it also discovered that Lizzy’s gums were badly infected, and all her teeth were rotten.

“She only had gums in the mouth. This poor dog was grossly neglected. It was near impossible to even come close to the dog because of the smell she had developed over time and because the tumour had started rotting,” Perrins added.

He said they could do nothing for the dog. The tumour was badly excoriated and severely infected, which made Lizzy nearly immobile.

The tumour was so large, painful and inhibiting that the dog could barely crawl to eat, drink, and relieve itself.

Asked why he had waited so long to take the dog to AWS, the pet owner merely said “he had only recently noticed the tumour, and didn’t think it was that serious”.

The organisation said given Lizzy’s profoundly neglected state and prolonged suffering, it will be pursuing charges of animal cruelty against its owner.

“Charges are imminent. AWS will continue to be the voice of these voiceless animals. Lizzy did not need to suffer like this. These sausage dogs are lovely animals and already have such tiny bodies. I can only imagine how draining this process must have been for her,” said Perrins.

AWS said if found guilty, the pet owner could be fined or imprisoned.

Perrins said it will also be calling for the deprivation of ownership of animals.

“We want the court to declare Lizzy’s owner unfit [to own a pet], and we will lobby for that. He should not be allowed to own a pet again, not after what he put his dog through,” said Perrins.