'Can I finish?' Tim Martin explodes at Jeremy Vine while dismantling Brexit scaremongering 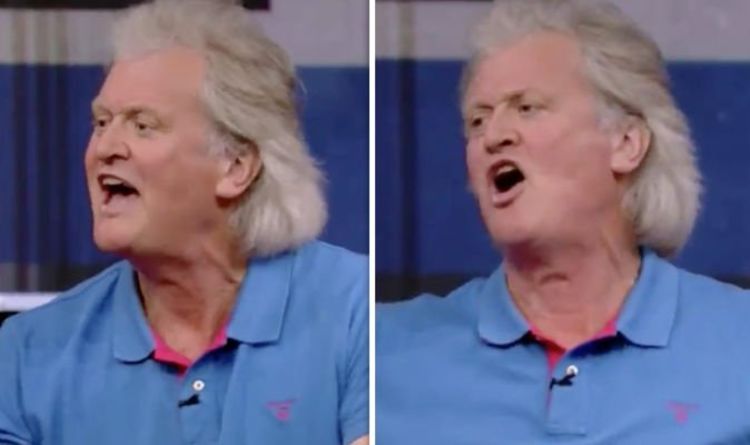 The owner of the popular pub chain is a heavily outspoken Brexiteer and has continued to insist Britain should leave the bloc on October 31 under a no deal Brexit scenario. His broadsides in particular against Remainers have become a regular event over recent months, and he was on the Leave campaigns’ most vocal supporters during the European Union referendum in 2016. The 90-minute programme ‘Live Brexit Referendum: Do We Want No Deal?’, broadcast on Channel 5 in front of a live studio audience, saw Tim Martin appear as part of a three-person panel.

But just 14 minutes into the debate, Mr Martin snapped at the programme’s host Mr Vine.

He said: “One of the things that Remain said before the referendum was that households would be worse off by £4,300.

Mr Vine then attempted to interrupt before Mr Martin pointed pointed to him and exploded: “Can I finish the point!

“That is £120billion and what the bus said added up to a few billion.

Speaking to CNBC, the Wetherspoons owner also claimed the UK would benefit from a no deal Brexit as products currently subjected to EU tariffs would be easier to trade if all arrangements with the bloc were to be interrupted.

He said: “My strong feeling is that what people call no deal enables the UK to adopt free trade.

“If you don’t sign a deal and sign your rights away with the EU then you can eliminate a lot of tariffs which are on over 12,000 tariffs – oranges, New Zealand wine, etcetera.

“That will improve living standards for consumers and help businesses.”

READ  Corbyn won an internal Brexit battle, but it could lose him the war

The pub chain founder yet again vented his fury at Remainers, criticising “a technocratic elite” for “frustrating” the Brexit process.

He wrote in a statement to accompany Weatherspoons’ latest financial results: “Elite Remainers are ignoring the ‘big picture’, regarding lower input costs and more democracy, and are mistakenly concentrating on assumed short-term problems, such as potential delays at Channel ports — which are easier to extrapolate on their computer models.”

Mr Martin also lashed out at rebel Remainers who voted against the Government for a bill tabled from Labour veteran Hilary Benn aiming to block a no deal Brexit.

The bill quickly passed through the House of Commons and House of Lords, before it was given Royal Ascent by the Queen and made law.

This would force Mr Boris Johnson to return to Brussels and ask the EU for another delay to Brexit until at least Janusy 31, 2020.

Mr Martin attacked these rebel Remainers defying the Government, accusing them of “frustrating the referendum result”.