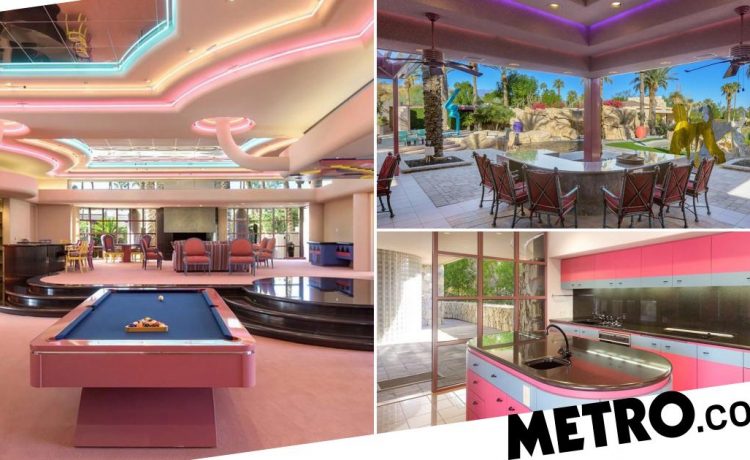 If you remember when you were younger being jealous of the richer kids whose parents could afford the Barbie Dream House, get ready to feel the adult version of that now.

A pink mansion that looks like a real life version of the toy house (although isn’t affiliated to Barbie officially) is up for sale for a cool $5.99 million (£4.75 million) in California.

Despite the eye-watering price tag, though, it’s actually a whole lot cheaper than it used to be, as the house was previously on sale in 2003 for $16.5 million (£13 million).

It has languished on the market for many years, but that doesn’t necessarily reflect the quality of this unique home.

The house is located in Indian Wells, a few hours from LA, and has seven bedrooms, 14 bathrooms, and parking spaces for 20 cars.

But the main selling point is the 80s decor, which features pink heavily throughout, with neon lights, ceiling mirrors, a waterfall, and light-up floors.

Even the kitchen is a pink Formica dream, and the property comes with a magenta pool table with many areas for entertaining in rosy-hued style.

The retro home has a theatre, steam room, lagoon, and views of lakes – as well as the Malibu Barbie style palm trees dotted across the gardens.

The waterfalls on the property were designed by Disney and it even boasts its own included collection of minerals and gems.

It’s also located in the sought-after Vintage Club, where top stars pay hundreds of thousands to play golf on the Tom Fazio-designed courses.

Despite all these features, though, the price for the mansion appears to keep going down going from $8.5 million to $5.99 million in the last two years alone.

Despite the fact that the home (especially the pink whirlpool baths and sprawling marble flooring) looks straight out of an Instagram home inspo account, the 80s style just isn’t something people are putting their money where their mouths are for.

We’re sure whoever ends up in this California period home will love it the way we do.

And, hopefully they won’t brag about it like those Barbie Dream House kids did.

You can find out more about it at Sotheby’s Realty.

READ  Alexa Chung has designed a collection for Barbour — just in time for festival season
Share on FacebookShare on TwitterShare on PinterestShare on Reddit
newsgrooveJuly 13, 2020