Bury expelled from EFL: League will not overturn expulsion despite £7m bid 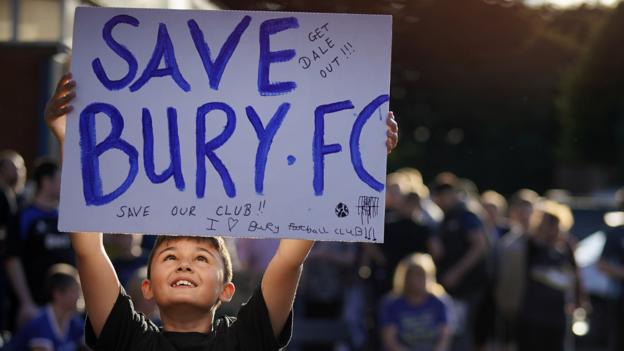 The English Football League will not go back on its decision to expel Bury, despite the club saying a £7m takeover bid was made aware to them before their deadline of 17:00 BST on Tuesday.

Gustavo Ferriera, a Brazilian pastor who runs a sports agency, says he has made a bid for the club and is happy to take on their current debts.

The Shakers were expelled after C&N Sporting Risk pulled out of a takeover.

It ended a 125-year stay in the League for the two-time FA Cup winners.

“Everyone connected with Bury Football Club were shocked, and disappointed with the EFL’s decision to expel this wonderful, historic, community-driven club from the Football League,” a club statement read.

“This decision was taken despite a credible new bidder being made aware to them before Tuesday’s 5pm deadline.

“This is something we are struggling to comprehend as the new bidder has proven significant funds to the EFL – funds to allow them to take over, run and secure the long-term future of Bury Football Club.

“Everyone at the club believed that such (were) the capabilities of the potential new owner, this would’ve started a brand new era for the club, seeing it go from strength to strength.”

The EFL’s conduct in the final few hours of Bury’s time in the League has been heavily criticised both by the club and Bury South MP Ivan Lewis.

“The extreme lack of communication from the EFL has left all involved with Bury Football Club astonished and in dismay,” the statement continued.

Lewis tweeted: “Very disappointed by EFL decision today and failure to engage seriously with a credible plan to save the club.”

READ  'Goofy' Gauff can't believe who is watching her heroics

“They have shown total disregard for the impact on the amazing fans and our entire town.”

The BBC has approached the EFL for a response to the claims.

After the meeting the group issued a statement saying “a number of options” had been agreed.

“These options include crowdfunding to rebuild the football club at every level, challenging the way in which the EFL have treated our club and ensuring the future ownership of the club is in the hands of the people who share our genuine passion for the club and whose only consideration is restoring the club to its rightful place in the football league,” it added.

It now plans to stage a public meeting to discuss those plans with fans.

Meanwhile the Football Supporters’ Association has called on crowds at this weekend’s matches to hold a minute’s applause in “a nationwide display of solidarity for Bury”.

The FSA want fans to applaud in the 27th minute of games as the Shakers were expelled on 27 August and were the first club to lose their League status for 27 years.

On 9 August, Bury were given a 14-day deadline to provide the necessary information or face expulsion. That deadline expired at 23:59 BST on Friday.

With the third-tier side effectively an hour from being thrown out of the EFL, owner Steve Dale told BBC Radio Manchester he had sold the club and they were set to survive.

That secured them an extension until Tuesday to complete the deal, but their stay in the League ended at 23:00 BST on Tuesday, six hours after Dale missed a final deadline to provide assurances he could fund the club or had sold it to someone who could.