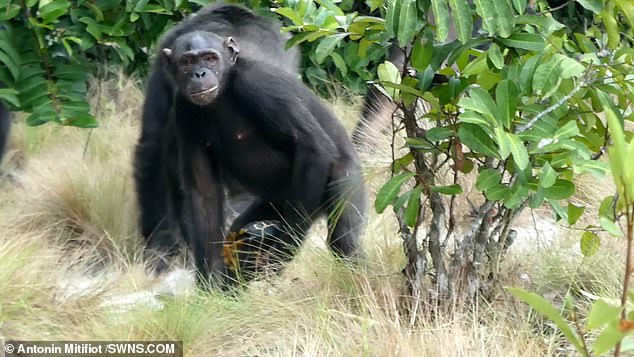 Incredible footage has shown the chimps feasting on the flesh after smashing their shell against a tree trunk.

In a paper published by the journal Scientific Reports, researchers from Germany say they spotted a group of chimpanzees dining on tortoises dozens of times at Loango National Park in Gabon. West Africa.

It’s the first time our closest cousins have been seen killing tortoises, and bolsters the notion that humankind’s distant cousins develop their own distinct cultures.

Footage taken by the researchers shows the male hunters cracking the shells of their unlucky prey against a tree like a nut – before taking bites out the soft underbelly and sharing the nutritious meat with other members of their family and group.

Brutal nature: The male hunters then share the nutritious meat with other members of their family and group, reveals stunning video footage, filmed by a German team in West Africa

In some cases, individual chimps transported the tortoises for several minutes, and over considerable distances, before trying to crack them open on suitable trees.

One even stored it in the hole of a trunk.

Describing the behaviour in the journal Scientific Reports, the German team behind it say it happened regularly as they kept watch watched on wild chimpanzees for almost two years.

Co corresponding author Professor Simone Pika, a cognitive scientist at the University of Osnabruck, described the finding as ‘unprecedented’.

She said: ‘Tortoise predation was observed frequently in most or all of the studied adult chimpanzee males. It consisted of a distinct sequence of behaviours involving the discovery of the prey, followed by smashing the tortoise shell with one hand against a hard surface, such as a tree trunk.

‘The chimpanzees then climbed a tree to consume the meat. In one instance, they even stored it.’

‘In addition, we report on a single case of food storage, in which an adult male tucked a half-eaten tortoise in a tree fork and retrieved it the next day to continue feeding.’ 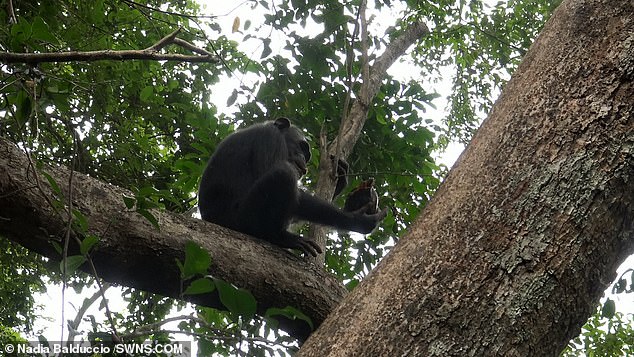 Food chain: The primate assesses its catch before devouring it and, later, sharing it with other family members – some of whom struggled to crack the shell 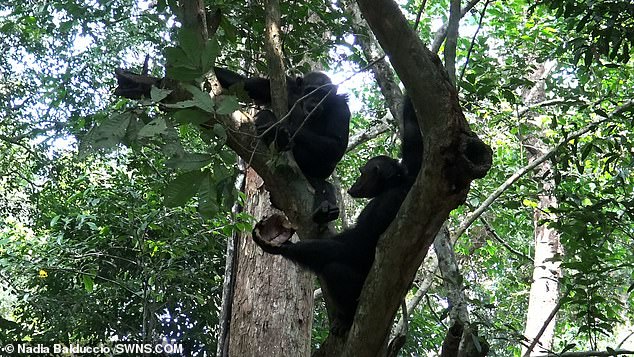 Gory: Ten times chimpanzees first smashed the tortoise against a trunk while on the ground and then smashed it again against another trunk or branch having climbed up a tree

WHY DO CHIMPS EAT TORTOISES?

Meat only accounts for 6 per cent of a chimpanzee’s diet – they usually feast on figs, leaves and palm wine.

So they probably choose tortoises because there’s virtually no risk of counter-attack.

A tortoise’s only defense is to retreat into its shell and stay still.

In 23 of the cases, the food was shared with other group members, including those who had previously attempted to open the tortoise shell but not succeeded.

Professor Pika said: ‘The most frequent behavioural sequence consisted of discovering and capturing the prey, smashing the shell with one hand repeatedly against a tree trunk and climbing into a tree to consume the meat.

‘In six cases, the chimpanzee first transported the tortoise between 10 to 50 metres on the ground, for a duration of one to eleven minutes, before smashing it.’

Ten times chimpanzees first smashed the tortoise against a trunk while on the ground and then smashed it again against another trunk or branch having climbed up a tree.

On most occasions the tortoise meat was shared out in a peaceful, cooperative manner with other individuals of the party, including those who had been unsuccessful at capturing tortoises. 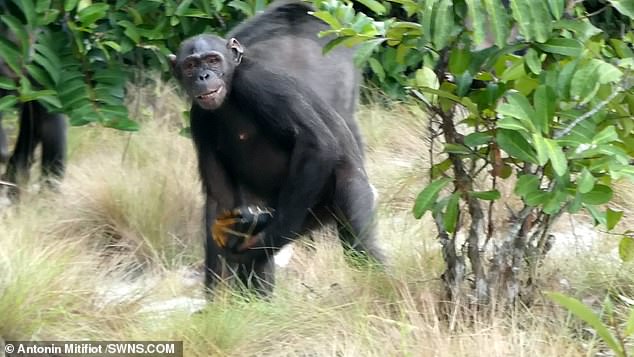 Food for thought: In some cases, individual chimps transported the tortoises for several minutes, and over considerable distances, before trying to crack them open on suitable trees 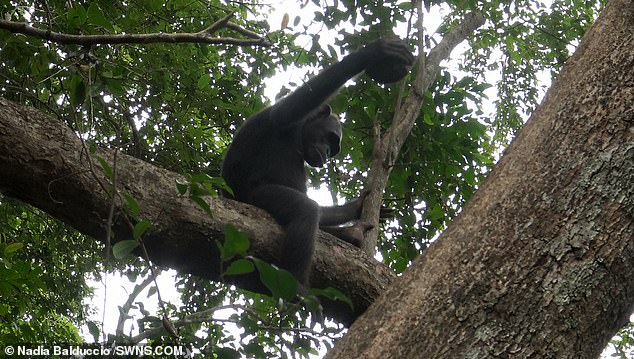 Chimps are sophisticated tool users – cracking nuts with stone tools and fishing for ants or termites with sticks. They also use leaves as ‘umbrellas’, and branches in social displays

Study corresponding author Tobias Deschner, a primatologist at the Max Planck Institute for Evolutionary Anthropology in Germany, added: ‘Storing food and later on retrieving it is an indication that the animals are able to plan into the future.

‘This is a trait that has long been claimed to exist only in humans.

‘The fact that we saw this happening exactly in a situation while feeding on a tortoise and while no other group member was close by, indicates to me that we may sometimes underestimate the mental capacities of certain animals species.’

Chimps are sophisticated tool users – cracking nuts with stone tools and fishing for ants or termites with sticks. They also use leaves as ‘umbrellas’, and branches in social displays.

READ  Binge drinking among women DOUBLES in a decade

She saw them using sticks to extract termites, and also hunting smaller mammals such as monkeys.

Until then, chimpanzees were believed to be herbivores. They were thought to only eat fruits, seeds, nuts, leaves and flowers.

But, just like humans, they are in fact omnivores – meaning they also consume animals.

WHICH ARE SMARTER: CHIMPS OR CHILDREN?

Most children surpass the intelligence levels of chimpanzees before they reach four years old.

A study conducted by Australian researchers in June 2017 tested children for foresight, which is said to distinguish humans from animals.

The experiment saw researchers drop a grape through the top of a vertical plastic Y-tube.

They then monitored the reactions of a child and chimpanzee in their efforts to grab the grape at the other end, before it hit the floor.

Because there were two possible ways the grape could exit the pipe, researchers looked at the strategies the children and chimpanzees used to predict where the grape would go.

The apes and the two-year-olds only covered a single hole with their hands when tested.

But by four years of age, the children had developed to a level where they knew how to forecast the outcome.

They covered the holes with both hands, catching whatever was dropped through every time.