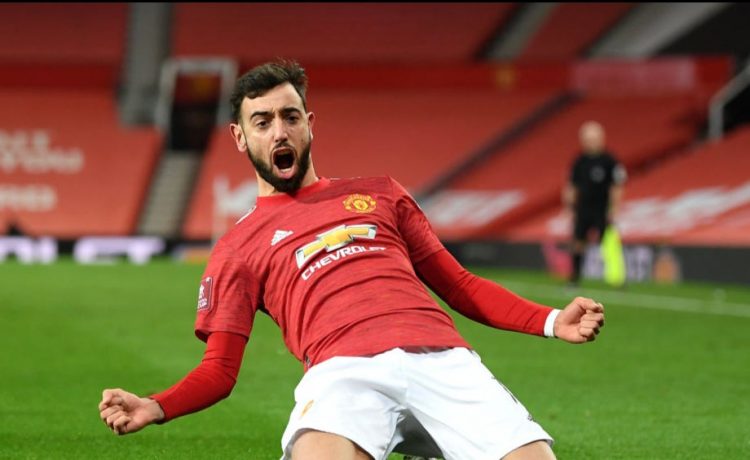 Just when you thought Bruno Fernandes could do no more to endear himself to Manchester United‘s supporters, he scores a stunning late free-kick after coming on as a substitute, settles3 a thrilling FA Cup fourth-round tie and – most importantly of all – knocks out Liverpool.

The first anniversary of Fernandes’ Old Trafford arrival falls this Thursday. The transformative effect he has had on United over the past 12 months is almost beyond measure and has generated many memorable moments. This first goal against their historic rivals perhaps tops all of them.

His manager knows how he is feeling. Ole Gunnar Solskjaer was the match-winner 22 years ago to the day, scoring even later and in only slightly more dramatic circumstances on the way to a historic treble. The same feat is off the table this season but this victory over a fellow title contender could similarly spur United on to great things.

Liverpool, meanwhile, have now won just one of their last seven games – and that, against a team of Aston Villa youngsters in the previous round. The FA Cup has never been much of a priority for Jurgen Klopp – this is the fifth time they have failed to reach the fifth round in his six years at Anfield – but the circumstances of this defeat will still hurt.

Klopp’s men at least played their part in an enthralling contest, with the 3-2 scoreline in contrast to the goalless draw that these two rivals played out at Anfield last weekend. Mohamed Salah is scoring again too, hitting each of their goals. Yet the danger that United posed through the speed of their other two scorers – Mason Greenwood and Marcus Rashford – proved too much against their injury-ravaged defence.

Despite their well-publicised struggles in front of goal, Liverpool struck first. Questions have been asked about Roberto Firmino of late but it was his majestic through ball which cleaved United’s defence in two for the opener, leaving Victor Lindelof and Luke Shaw to share the blame and responsibility. Salah’s finish was just as good – a delicately executed dink over the onrushing Dean Henderson.

It briefly looked as if Liverpool were back in the groove – strangely, no more so than in the moments leading up to Greenwood’s equaliser, but then that is the danger when up against this United side and their lethal transition play. Paul Pogba stopped a promising Liverpool move with a sliding tackle on the edge of his own penalty box, switched possession out to Rashford on the left flank and suddenly, they were in.

James Milner might have intercepted Rashford’s long raking pass over the top of Liverpool’s backline but misjudged its flight entirely, allowing the ball to run through for the unmarked Greenwood. Despite a retreating Andy Robertson’s best attempts to put him off by screaming in his ear, the teenager’s low finish was perfectly placed out of Alisson’s reach and into the far corner.

United came on stronger, with Rashford’s contest against Rhys Williams emerging as a clear mismatch towards the end of the half. At the start of the second, it led to a goal. Williams simply had to cut out Greenwood’s ambitious ball in behind, with Liverpool’s defence practically stationed on the halfway line, but the 19-year-old – on loan at Kidderminster Harriers last season – missed the interception.

Like Greenwood for the first goal, Rashford collected the loose ball on the follow through, advanced and converted. Just as in ‘99, United had recovered from a 1-0 deficit to lead 2-1 but they had not needed to be particularly canny or subtle to turn this game on its head. Liverpool were giving them all the space that they required. At least this time they had time to respond.

Milner missed a gilt-edged opportunity to equalise shortly before the hour mark, then played a part in the leveller a minute later. As United struggled to play out from the back from the resulting goal kick, Edinson Cavani’s misplaced pass set Liverpool in again. Firmino broke into the box and squared for Milner, whose simple lay-off allowed Salah to shoot through Henderson’s legs and score.

Both Klopp and Solskjaer turned to their benches and sought for their heavyweights. While Sadio Mané was introduced for the visitors, Fernandes switched in for his understudy Donny van de Beek. The Portuguese was quiet until Fabinho tripped Cavani on the edge of the penalty area, at which point he saw his chance to make an impact, whipping the free-kick low and into the bottom right-hand corner of Alisson’s goal.

His celebration – spinning away in a state of delirium – said it all. For the first time in his United career, Fernandes was widely criticised for his performance in the stalemate at Anfield last weekend. Some have spent the week questioning whether he performs against top opposition. This was his response and it was emphatic. United’s man for the big moments has his biggest moment yet.