Brooklyn Beckham and his fiancee Nicola Peltz are said to be planning not one, but two weddings, for their big day.

According to reports, the newly engaged couple, who have been dating for eight months, are sparing no expense when it comes to saying ‘I do’ and they’re hoping to hold two ceremonies – one in the UK and one in Florida.

The Sun reports that model Nicola’s father Nelson is ‘planning on spending £4million’ on throwing the perfect wedding for the pair.

Insiders told the paper: ‘Everyone is delighted for them. Brooklyn has always looked up to his parents and grandparents, who have been married for a combined 70 years and that’s what he wants.

‘David and Victoria are thrilled. They feel he has finally met a girl who is not after him for fame or money. In fact, her family wealth dwarfs the Beckhams.’

They added: ‘Traditionally, of course, the father of the bride pays for the wedding — but David and Victoria will definitely want to contribute in some way.

‘It’s too early to set a date, but they’re aiming for the end of next summer or early autumn.’

Metro.co.uk has reached out to Brooklyn’s rep.

The 21-year-old confirmed his engagement via Instagram, sharing a snap of himself and Nicola, 25, cuddling up together in a field, with Nicola showing off her new engagement ring.

Brooklyn’s little sister Harper, nine, had taken the impressive shot and he captioned his photo: ‘Two weeks ago I asked my soulmate to marry me and she said yes xx

‘I am the luckiest man in the world. I promise to be the best husband and the best daddy one day ❤️ I love you baby xx.’

Nicola shared the same photo and penned: ‘you’ve made me the luckiest girl in the world.

‘I can’t wait to spend the rest of my life by your side. your love is the most precious gift. I love you so so much baby and thank you harper for this pic.’

Brooklyn’s famous mum Victoria was quick to share her blessing over the pair getting married, as she told fans: ‘The MOST exciting news!! We could not be happier that @brooklynbeckham and @nicolaannepeltz are getting married!

‘Wishing you so much love and a lifetime of happiness ??We all love you both so much x @davidbeckham @romeobeckham @cruzbeckham #HarperSeven ?.’ 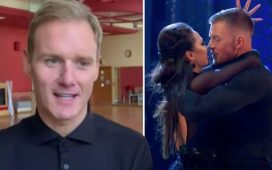