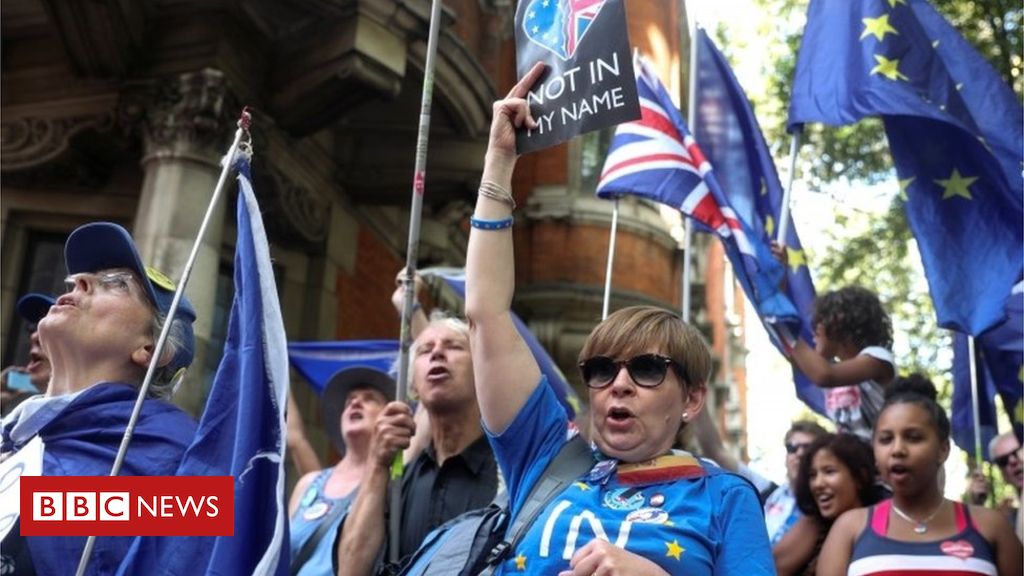 The UK’s Brexit negotiators will meet their EU counterparts twice a week during September to discuss a new deal.

It follows a backlash from MPs and opponents of a no-deal Brexit against the prime minister’s decision to suspend Parliament next month.

Boris Johnson said “it is now time for both sides to step up the tempo” and that he was “encouraged” from talks with EU leaders.

The EU said it expected the UK to come up with “concrete proposals”.

A European Commission spokesperson said its “doors remain open” and insisted it had “demonstrated our willingness to work 24/7 throughout this long process”.

No 10 said the two sides “remain some distance apart on key issues” but added they were “willing to work hard to find a way through”.

Mr Johnson also welcomed “a willingness to talk about alternatives to the anti-democratic backstop”.

The UK is currently set to leave the EU on 31 October with or without a deal.

The subject at the forefront of the twice weekly discussions will be the controversial backstop, which aims to prevent a hard border on the island of Ireland after Brexit.

The government reiterated that a new deal would not be agreed unless the withdrawal agreement is reopened and the backstop taken out.

The withdrawal deal, agreed between Mr Johnson’s predecessor Theresa May and the EU, was repeatedly rejected by MPs.

Mr Johnson says while he would prefer a deal he is willing to leave without one – and maintains the UK will leave by the October deadline “no ifs no buts”.

The prime minister asked the Queen to suspend Parliament in September on Wednesday, saying he would outline his “very exciting agenda” in a Queen’s Speech on 14 October.

What is the latest on the legal challenge?

Mr Johnson’s move to suspend Parliament has been criticised by some MPs who argue the prime minister is trying to stop them from blocking a no-deal Brexit, because it will not give them enough time to debate.

In Scotland a judge is considering a legal attempt brought by parliamentarians to block Parliament’s suspension. His decision is due at 10:00 BST on Friday.

The planned suspension also triggered protests across the country, with further demonstrations expected this weekend.

Meanwhile, an e-petition on the government’s website demanding Parliament not be suspended has reached more than 1.5m signatures.

What are other parties doing?

Opposition parties have released a joint statement condemning the “undemocratic actions” of the prime minister and calling for the suspension to be reversed immediately.

“The prime minister is shutting down Parliament with the sole aim of stopping MPs from avoiding a no-deal Brexit,” said a statement from Labour, the SNP, the Lib Dems, Plaid Cymru, the Independent Group for Change and the Green Party.

“This will be the longest prorogation in recent history, and one that comes at a critical moment in the history of our respective nations and the Brexit process.”

Leader of the DUP Arlene Foster, however, welcomed the decision but said the terms of her party’s agreement with the Conservatives would now be reviewed.

Mr Johnson has a working majority in Parliament of one and support from the DUP keeps the Conservative Party in power.

What other reaction has there been?

Some Tories have also objected to the five-week suspension. Government whip Lord Young has resigned in protest, arguing the move risks “undermining the fundamental role of Parliament”.

Mr Rees-Mogg said this parliamentary session had been one of the longest in almost 400 years, so it was right to suspend it and start a new session and outrage at the plan was “phoney”.

But Ruth Fox – director of parliamentary experts the Hansard Society – said this prorogation was “significantly longer than we would normally have” for the purpose of starting a new parliamentary session.

Despite having little time, MPs still have options for trying to block a no-deal Brexit.

MPs cannot block prorogation, but they could try to take control of the parliamentary timetable in order to pass legislation which would force the prime minister to request an extension to the Brexit deadline.

Another option would be to remove the current government through a vote of no confidence.

Labour leader Jeremy Corbyn vowed to “challenge” Mr Johnson on what he described as “a smash and grab raid against our democracy,” when Parliament returns from recess on Tuesday.

The former Justice Secretary David Gauke – who resigned over Mr Johnson’s openness to a no-deal Brexit – told the BBC that next week could be MPs’ “only opportunity” to challenge no deal.

He said the public did not want a no-deal Brexit, but the options of those opposed to such an exit have “now narrowed”.

Mr Corbyn has also said tabling a no-confidence motion in the PM at an “appropriate moment” also remained an option.

It is also thought some MPs are exploring ways of ensuring Parliament can meet on the Friday, Saturday and Sunday before the planned suspension.

READ  Bullying complaints at BBC soar 70% in a year
Share on FacebookShare on TwitterShare on PinterestShare on Reddit
newsgrooveAugust 29, 2019