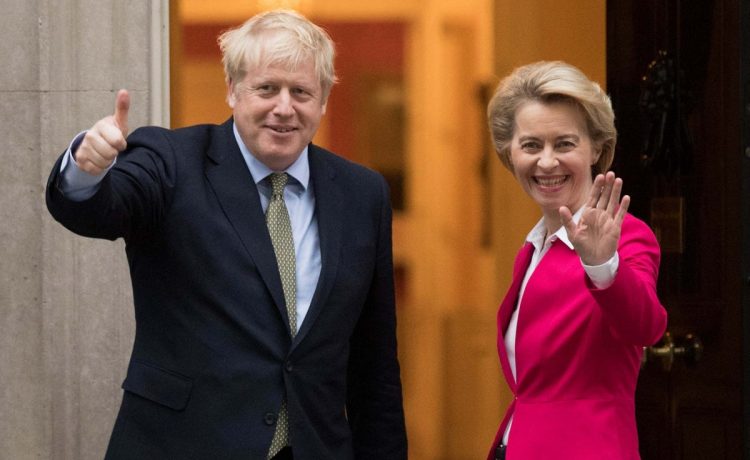 The pair said in a joint statement that they have asked their chief negotiators to “prepare an overview of the remaining differences” in post-Brexit trade talks to be “discussed in person in the coming days”.

The joint statement said: “As agreed on Saturday, we took stock today of the ongoing negotiations. We agreed that the conditions for finalising an agreement are not there due to the remaining significant differences on three critical issues: level playing field, governance and fisheries.

“We asked our Chief Negotiators and their teams to prepare an overview of the remaining differences to be discussed in a physical meeting in Brussels in the coming days.”

The prime minister conceded the clauses after the EU signalled the final deadline for a deal is Wednesday.

The Government has said it is prepared to deactivate three controversial clauses 44, 45 and 47 from the UK Internal Market Bill following discussions in the Withdrawal Agreement Joint Committee.

“We have made no tangible progress.

“Whilst we do not consider this process to be closed, things are looking very tricky and there’s every chance we are not going to get there.”

If there is no agreement, the UK will leave the European single market and customs union on December 31 and begin trading with the bloc on World Trade Organisation terms, with the imposition of tariffs and quotas.

Rachel Reeves, Labour’s shadow minister for the Cabinet Office, urged the UK Government and the European Union to “get on with reaching an agreement”.

The comments come after Boris Johnson and European Commission president Ursula von der Leyen confirmed they would meet in Brussels in a bid to break the post-Brexit trade deal negotiations.

Ms Reeves said: “Day after day we see this Government failing to deliver their promises to the British people and failing to get the deal they promised done.

“Securing a deal is critical to the British national interest for jobs and security.

“Even at this 11th hour, we urge both sides to get on with reaching an agreement.

“We can then focus on the job at hand which is securing the economy and rebuilding our country from the pandemic.”

In a joint statement following their call on Saturday, Mr Johnson and Ms von der Leyen acknowledged “significant differences” remained on the key issues of fishing rights, competition rules and the governance arrangements for any deal.

“Both sides underlined that no agreement is feasible if these issues are not resolved,” they said.

“Whilst recognising the seriousness of these differences, we agreed that a further effort should be undertaken by our negotiating teams to assess whether they can be resolved.

“We are therefore instructing our chief negotiators to reconvene tomorrow in Brussels. We will speak again on Monday evening.”