Brexit: Labour aims to 'pin down' ministers as talks resume 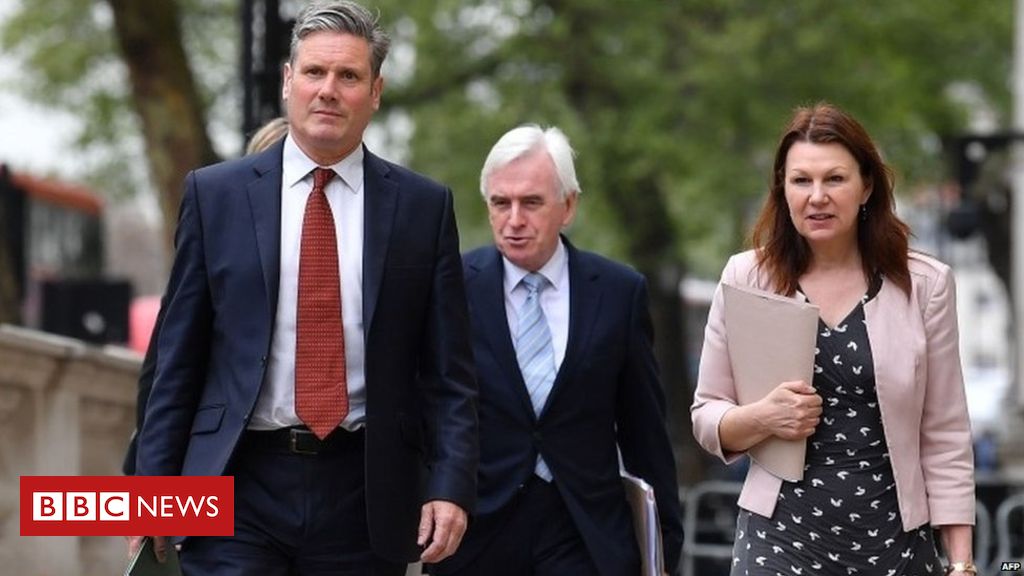 Talks between the government and Labour aimed at trying to break the Brexit deadlock have resumed in London.

The process has largely been on hold since before Easter, when ministers announced a series of working groups to discuss individual issues.

Labour’s Sir Keir Starmer said he wanted to “pin down” the government on what changes it was willing to make.

No 10 dismissed claims the two sides were killing time, saying talks were “serious” but “difficulties” remained.

The BBC’s political correspondent Iain Watson said he understood there would be an attempt in the coming days to reach a compromise on the UK’s future customs arrangements with the EU – a key sticking point.

Ministers insist it is still their aim to get MPs’ approval for the terms of the UK’s exit from the EU by 22 May so the country does not have to take part in elections to the European Parliament a day later.

No 10 says it wants to introduce the Withdrawal Bill – legislation required to implement the withdrawal deal reached with the EU – to Parliament as soon as possible.

But this will not happen this week and Downing Street said the process would not begin until it had a “realistic prospect of securing passage”.

A No 10 spokesman said both sides would have to compromise but it still believed “there was a possibility of finding a solution”.

Monday’s talks are being led on the government side by Chancellor Philip Hammond, Brexit Secretary Stephen Barclay and Environment Secretary Michael Gove.

Shadow Brexit Secretary Sir Keir Starmer said the talks were at an important stage and the opposition continued to approach them constructively.

“Today what we need to do is to attempt to pin the government down and flesh out where it is prepared to change.”

Earlier Shadow Attorney General Shami Chakrabarti said Labour front benchers involved in the talks must tell the party’s ruling national executive committee on Tuesday “whether there is any hope for sensible Brexit”, or whether the only means of breaking the deadlock looks to be a second referendum or a general election.

Former Conservative leader Iain Duncan Smith told the BBC the European Parliamentary elections, if they went ahead, would be the “most unwanted” polls in history.

While he would still vote Conservative, he told Politics Live trust in his party on the doorsteps had “collapsed” after the UK failed to leave the EU, as planned, on 29 March.

The EU has set a new deadline of 31 October for the UK’s departure.

READ  'Concerning' rise in car journeys as public urged to stay home during outbreak
Share on FacebookShare on TwitterShare on PinterestShare on Reddit
newsgrooveApril 29, 2019