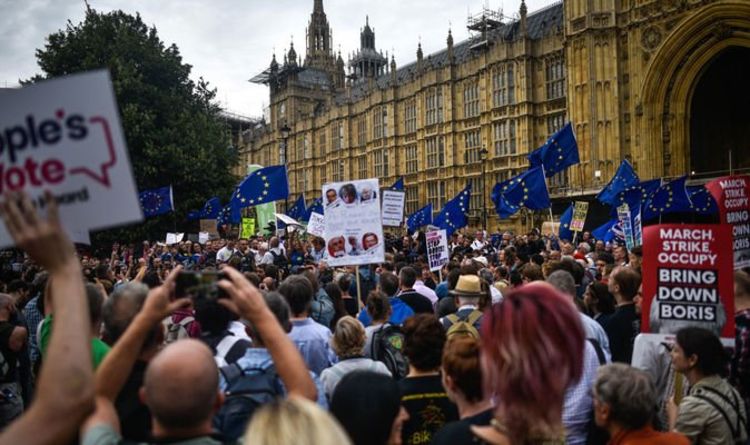 Pro-EU activists have made signs which they are protecting from the rain with umbrellas in Manchester in what they have called a “pro-democracy protest”. The protest against not giving Remainer MPs an opportunity to de-rail Brexit is taking place in Manchester Albert Square. They have even started their own hashtag, called #StopTheCoup.

One Brexiteer joked at the size of the demonstration, which at the time of posting the announcement was about just seven people.

This grew to around 30 as the day continued.

Numbers are also gathering in College Green in London, with a demonstration kicking off at 5.30pm.

One social media user said: “This is about more than Brexit: this is about the end of parliamentary democracy in the UK.”

Remainers have taken to the streets in London and Manchester to protest (Image: GETTY)

Pro-EU activists have made signs which they are protecting from the rain (Image: GETTY)

Another said a mass protest will take place on October 19.

The commenter said: “How is everybody preparing for blackouts, food and medicine shortages ahead of October 31?

“I think the march in London on October 19 will bring even more #Remain people out to protest! #RevokeRemainRebuild #RevokeArt50 #RevokeArticle50 #Brexit.”

Another added a Parliament Square protest would also take place.

Speaker of the House of Commons John Bercow called it an “outrage” (Image: GETTY)

Mr Johnson flew to Balmoral in Scotland to interrupt the Queen’s annual summer break there.

She agreed within a few hours to his plan to suspend Parliament by September 12 until October 14.

Her new speech will take place on that day.

Speaker of the House of Commons John Bercow called it an “outrage”.

Labour leader Jeremy Corbyn, who attempted his own coup to try and oust the Prime Minister by begging other opposition leaders to install him as leader of the nation, took aim at the Queen.

He said she had launched a “smash and grab against our democracy” in a letter he wrote to her, which she did not respond to.

Other opposition leaders such as the SNP’s Nicola Sturgeon and Lib Dems’ Jo Swinson also expressed their fury.

Meanwhile, the EU have even taken to threatening Mr Johnson.

Guy Verhofstadt told him if he went ahead with the plan to shut down Parliament, he would take Brexit negotiations off the table.

He said: “‘Taking back control’ has never looked so sinister. As a fellow parliamentarian, my solidarity with those fighting for their voices to be heard.

Mr Johnson this morning told Sky News the shutting down of Parliament was in fact not to thwart attempts by Remainer MPs to block a no deal.

He said: “As I said on the steps of Downing Street we are not going to wait until October 31 before getting on with our plans to take this country forward and this is a new government with a very exciting agenda to make our streets safer… we need to invest in our fantastic NHS.

“We need to level up education funding across the country, we need to invest in the infrastructure that is going to take this country forward for decades and we need to deal with the cost of living, moving to a high wage, high productivity economy which is what I think this country needs to be.

“To do that we need new legislation. We have got to be bringing forward new and important bills and that is why we are going to have a Queen’s Speech and we are going to do it on October 14.

Boris Johnson teamed up with the Queen to shut down Parliament (Image: GETTY)

“We have got to move ahead now with a new legislative programme.”

The news he would be shutting down Parliament saw Scottish Tory Ruth Davidson quit her role.

An official announcement is set to take place later this evening, it is expected.

Ms Davidson is known to be strong opposed to the UK quitting the bloc without a deal in place, and her decision may be motivated by Mr Johnson’s decision to seen a suspension of Parliament, ratified by the Queen this afternoon.

BBC political editor Laura Kuennsberg tweeted: “Ruth Davidson is considering her position and set to quit – no official confirmation tonight, sources indicate not direct result of today’s announcement from No 10 – mixture of personal and political reasons building over recent months.”