A schoolboy who miraculously survived 80 per cent burns is raising money so he can see his family and friends for the first time since an horrific accident as a toddler.

Zaid Garcia, from Galveston, Texas, has been blind since the age of two after a candle caught fire to his blankets as he slept and burned him alive.

The teenager lost both of his hands and five toes, and his eyes were so severely burned that surgeons covered them with skin to let them heal.

Zaid is hoping to get his sight back through surgery to have the layer of skin removed and his eye lids reconstructed.

He says the first thing he wants to see is his best friend Julia’s ‘beauty’ and his family.

A GoFundMe page was set up by non-profit organisation Special Books for Special Kidswith the initial goal of raising £50,000.

But supporters turned out in droves and have so far raised £300,000 for the teenager. 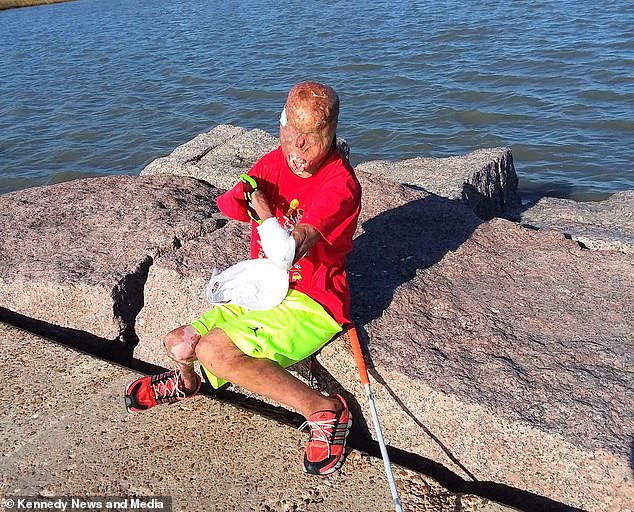 Zaid Garcia, from Galveston, Texas, has been blind since the age of two after a candle caught fire to his blankets as he slept and burned him alive

Zaid said: ‘I’m sharing my story to inspire people and show them that miracles do exist.

‘When I was two-and-a-half my mum took me to bed and […] a candle fell and it caught on fire.

‘I was super injured. I’ve had so many operations now that I can’t even remember. I’ll probably have more skin grafts [in the future].

‘They amputated both my hands and they took the fingers too. I have both my legs and feet.’

He added: ‘I have five toes on the left and on the right, I have one toe. I don’t walk normally. I don’t step flat.

‘The doctors shut my eyes under the skin. I don’t know why they didn’t just take them out – probably because they thought I would see in the future.

‘So my next hope is to get my vision back. I’ve been blind since the accident. If I was to have this surgery it would be the first time I’d see the world properly [since before the fire].

‘To be able to see my family again after 14 years will be good. I think it’ll be cool. The first thing I want to see would be one of my friends. My best friend from school, Julia. I’d like to see her beauty, I guess.’ 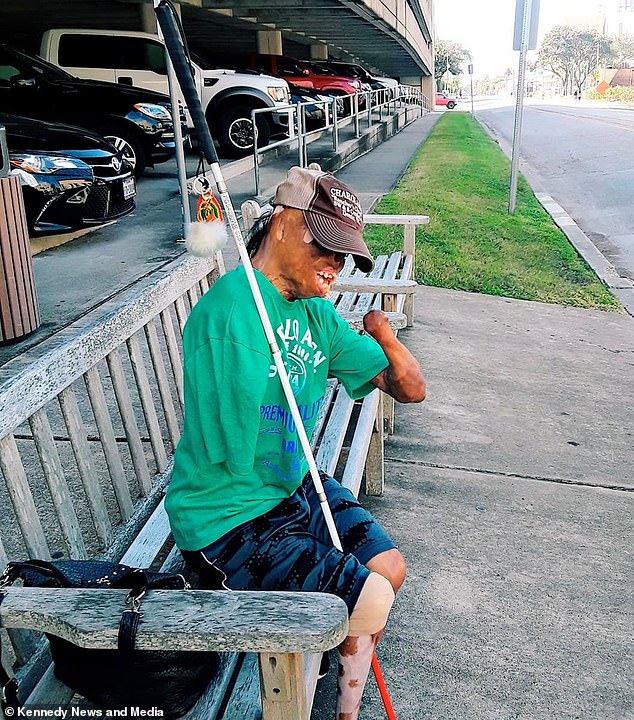 The teenager lost both of his hands and five toes, and his eyes were so severely burned that surgeons covered them with skin to let them heal

After the incident, Zaid was flown from his former home in Mexico to a hospital in San Antonio, Texas, where he received the treatment for fourth degree burns, which ultimately saved his life.

When Zaid was released from hospital, his family settled in the US state, where he currently attends a school for the blind.

Zaid said: ‘It was hard growing up to be honest. People are scared of me because of the way I look and when I was young, I tried to commit suicide.

‘My mum told me that was not the right thing. I was finding it hard to fit in at school and make friends. I work hard to improve each day. I just want to be accepted.

WHAT ARE FOURTH DEGREE BURNS?

It is often thought that third-degree burns are the worst.

However, the degrees of burns can actually go higher.

This is the deepest and most severe of burns and are potentially life-threatening.

These burns destroy all layers of your skin, as well as your bones, muscles, and tendons.

There is no feeling in the area since the nerve endings are destroyed.

This is because the nerves are responsible for sending pain signals to your brain.

‘When people meet my parents, my mum prepares them. She explains, “Hey, I have a child with disabilities.”

‘She prepares them. Of course, they get surprised, but [soon] they only care about my personality.

‘[When people meet me now], I hope that they think I’m interesting – that I’m easy to talk to. I like going out with friends and giving them time to talk with me if they need something.

‘I like to sing and sometimes I write songs or poems. I love art and playing around with pencils. I have other interests, and I hope people see that when they meet me.’

Zaid has overcome many obstacles throughout his life but remains hopeful for the future, when he plans to become a translator and motivational speaker.

He added: ‘I hope people will realise that you shouldn’t give up just because they tell you you’re not going to make it. I want to encourage people.

‘The doctors said I was going to die. There was no hope for me. They predicted that I would not be able to talk, but I’m a miracle because of that. I can say thank you in nine languages.

‘The most important thing for me is learning languages – Finish, Swedish, Danish, Chinese. In the future I want to be an interpreter and maybe a motivational speaker.

‘Spanish is my first language and I learnt English at school when I was just nine-years-old. I’m a sophomore this year. I’m working hard on my exams and I will probably go to college.

‘My parents say to me ‘be good’ when I go to school. They are very supportive and encourage me to carry on as if nothing happened.’

To donate towards Zaid’s surgery, visit his GoFundMe page by clicking here.