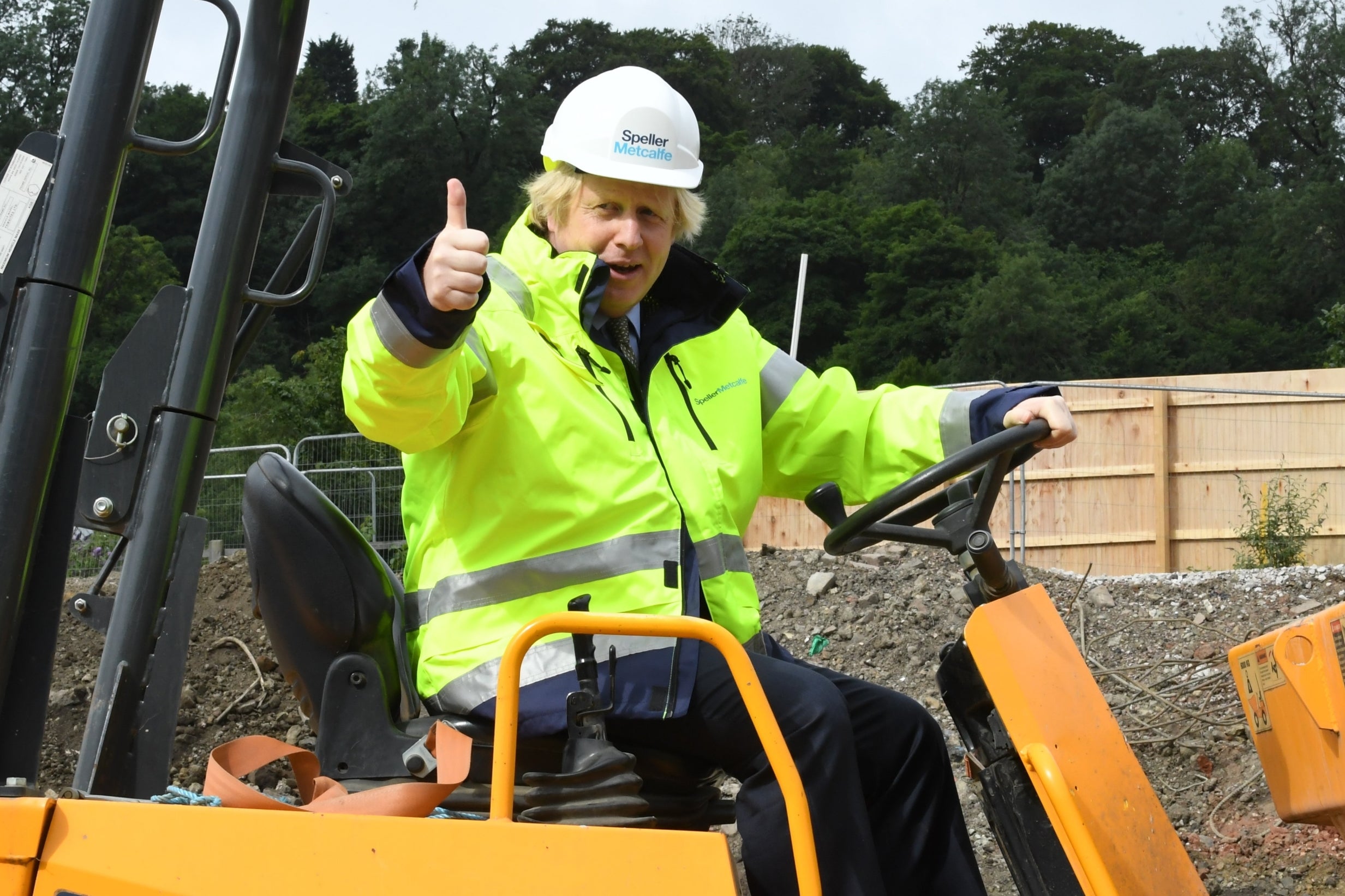 Boris Johnson today urged the country to make a dash for growth amid signs of public support for the easing of lockdown starting to ebb and fears of fresh outbreaks.

The Prime Minister took to the controls of a digger in Dudley to symbolise his “build, build, build” blueprint for getting nervous Britons back to work and the country earning.

But the backdrop to his enthusiastic speech was of anger in Leicester as schools were closed and shops put into deep freeze after a local upsurge in cases, and uncertainty in towns such as Doncaster, where official figures showed a rise over the past week.

As Mr Johnson was due to deliver his speech, polling research by YouGov for the Evening Standard revealed that public backing for the July 4 freedoms from lockdown has dropped, suggesting people have been spooked by fears of fresh outbreaks and the sight of sunseekers crowding onto beaches in apparent disregard for social distancing.

Support for the reopening of pubs, hairdressers, cinemas and restaurants has fallen from 64 per cent on June 23 to 55 per cent now, while opposition has gone up from 29 per cent to 38, the study found.

It was revealed that nine workers at the Mini car factory in Oxford tested positive for coronavirus. BMW said it was “monitoring the situation” and the site with 4,500 workers remained open.

London appears to be holding off another upsurge so far, but data published by Public Health England shows new infections increased in the week beginning June 20, albeit from very low bases. These include Hammersmith and Fulham, up from seven to 18, Ealing (five to 14) and Westminster (6 to 14).

In Leicester, businesses were aghast at being plunged into extended lockdown, saying the measures “won’t make a difference”.

Robin Dignall, the owner of Hair@1RD hairdressers in the city centre, said he “needs to get the customers back in”. He pleaded: “We were all geared up ready to open on July 4 but, from reading the government guidelines, they clearly haven’t consulted anybody in our profession.”

Health Secretary Matt Hancock said he is getting ready to change the law to allow the enforcement of the lockdown if necessary. He told Sky News that “in some cases” this would require the police enforce the rules.

Mr Hancock added: “We will be bringing forward a legal change very shortly, in the next couple of days, because some of the measures that we’ve unfortunately had to take in Leicester will require legal underpinning.”

He later told LBC that they would be reviewing whether they could lift the measures in a fortnight, adding: “I hope we don’t have to take more action but we will if that’s necessary.”

He was also asked about people from Leicester travelling outside the area and replied: “We are recommending that people don’t travel unless it’s absolutely necessary. We know that this works, we know how to control this virus. It requires sacrifices by everybody.”

Mr Hancock said they did not want to police travel, but added: “Of course we will if we have to. I have the legal powers in the Coronavirus Act to be able to do that if we need to. To impose travel restrictions.”

He also said Transport Secretary Grant Shapps would this week outline the next steps for international travel.

Chris Curtis, political research manager at YouGov, said: “Polling already shows a large majority of the public — 74 per cent — are worried about a second wave of coronavirus, so photos and rolling news footage of busy public areas will only reignite those concerns.

“Keeping the public onside is going to be crucial for the Government during the next stage of the pandemic, given the fine line they need to tread between making customers confident enough to venture out to get the economy going again while at the same time not signalling to the public that social distancing is over.”

In his big speech, the PM was promising a “new deal” of billions of pounds of investment to ease the UK through the aftermath of the coronavirus pandemic. The Prime Minister began with the statement: “We cannot continue to be prisoners of this crisis.” He also unveiled new laws to make it easier to turn empty shops into cafés and homes in what he claimed was the most radical planning shake up since World War II.

Applications to add extra storeys to flats and houses will be fast-tracked, increasing the height of buildings in crowded cities like London. In some cases owners will not need planning permission to convert buildings into new uses, especially if they are earmarked for much-needed homes, and where they do need permission there will be less red tape. The changes, due to be rushed out by September, will be controversial with existing residents who have opposed redevelopment projects who may find they have less sway in future.

The Prime Minister’s keynote “build, build, build” speech maps out a plan to boost spending on infrastructure and growth, particularly in regions that have felt left out in the past.

The Government said a key aim of looser planning regulations was to carve out new flats through the regeneration of vacant and redundant buildings. Commercial properties that have failed, including newly vacant shops on high Streets, will get the green light to be converted into residential housing more easily. Pubs, libraries and village shops will be excluded because they are deemed “essential to the lifeblood of communities”.